It’s been a week spent catching up with space mission news, focusing on Rosetta, Juno and today, New Horizons. Usually I ponder what I’m going to write each day on Centauri Dreams while I’m having breakfast, a quiet time to reflect on recent events. And if Jay Melosh (Purdue University) is to be believed, I might have taken inspiration from the dish of oatmeal sitting in front of me when it comes to Pluto. Because Melosh and grad student Alex Trowbridge led recent research that may explain what we see at Sputnik Planum.

A bit of background before I return to that bowl of oatmeal. We’ve seen that Sputnik Planum has an unusual appearance, visible in the photo below, that shows patterned polygons. One way of explaining this is to invoke icebergs floating on a sea of nitrogen ice. Melosh and Trowbridge believe the polygons could be what are called Rayleigh-Bénard convection cells, which flag convection that occurs in a fluid that is being heated from below. Says Melosh:

“Imagine oatmeal boiling on the stove; it doesn’t produce one bubble for the entire pot as the heated oatmeal rises to the surface and the cooler oatmeal is pushed down into the depths, this happens in small sections across the pot, creating a quilted pattern on the surface similar to what we see on Pluto. Of course, on Pluto this is not a fast process; the overturn within each unit happens at a rate of maybe 2 centimeters per year.” 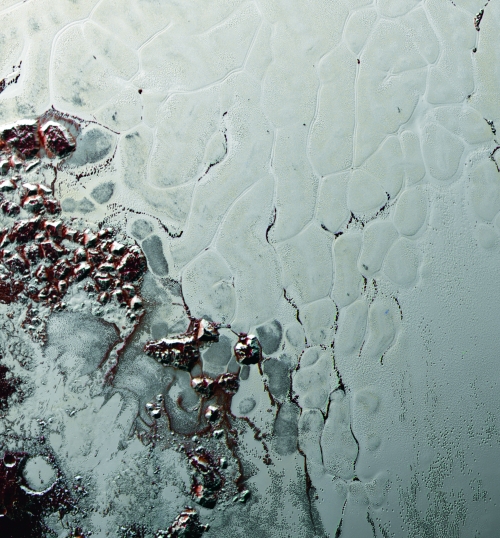 Image: Like a cosmic lava lamp, a large section of Pluto’s icy surface is being constantly renewed by a process called convection that replaces older surface ices with fresher material. Scientists from NASA’s New Horizons mission used state-of-the-art computer simulations to show that the surface of Pluto’s informally named Sputnik Planum is covered with churning ice “cells” that are geologically young and turning over due to a process called convection. The scene above, which is about 400 kilometers across, uses data from the New Horizons Ralph/Multispectral Visible Imaging Camera (MVIC), gathered July 14, 2015. Credit: NASA/Johns Hopkins University Applied Physics Laboratory/Southwest Research Institute.

We’re looking at a surface, then, that is under continual renewal as older surface ice is replaced by new material coming up from below. The nitrogen ice of Sputnik Planum appears in a basin on a planetary surface primarily composed of water ice. Structurally weak, nitrogen ice has a low enough viscosity to flow in an area where water ice, of much higher viscosity, forms hard mountains. Thus we see mountains of water ice at the edges of the polygon regions. The researchers believe these have floated as icebergs within the convection current.

Analysis of the New Horizons data shows that the polygons are between 16 and 48 kilometers across. Melosh and Trowbridge calculate that the nitrogen ice must be at least five kilometers deep for the water icebergs to appear where they do, and analysis of the width-to-depth ratio of the nitrogen convection cells suggests the figure is closer to 10 kilometers, quite a bit deeper than the minimum needed for convection to occur. Over millions of years, the moving nitrogen ‘blobs’ can merge, with ridges marking places where cooler nitrogen ice sinks back down.

Thus we have a way to explain a Sputnik Planum surface that appears to undergo frequent renewal, a surface that investigators have thought to be less than ten million years old. The new work drops that number to about one million years. That’s a reminder that on icy dwarf planets in the Kuiper Belt, materials we normally think of as gases can produce surface change, making them active in complex ways. Considering we’re dealing with a surface that averages -229° C (44 Kelvin), a surface this active emphasizes the need for dedicated missions to the outer Solar System. Only actual data from the mission target can refine or overturn earlier models.

A second paper appearing in the same issue of Nature reinforces the convection explanation, although it may take a probe on the surface to actually confirm it. This work comes from William McKinnon and colleagues (Washington University, St. Louis). Says McKinnon:

“For the first time, we can really determine what these strange welts of the icy surface of Pluto really are. We found evidence that even on a distant cold planet billions of miles from Earth, there is sufficient energy for vigorous geological activity, as long as you have ‘the right stuff,’ meaning something as soft and pliable as solid nitrogen.”

McKinnon’s computer modeling shows solid nitrogen being warmed by internal heat and rising before cooling sufficiently to sink again, beginning the cycle all over again. The work explains X- or Y-shaped features that appear at the junctions where multiple convection cells once met. Pluto’s atmosphere may well be renewed by this activity. Principal New Horizons investigator Alan Stern calls Sputnik Planum, an area bigger than Texas and Oklahoma combined, ‘one of the most amazing geological discoveries in fifty-plus years of planetary exploration.’

Will we find similar processes at work at similar timescales — a few centimeters a year — on other dwarf planets? The next target for New Horizons isn’t a dwarf planet, but 2014 MU69 may still come up with some surprises of its own, assuming NASA approves funding for the 2019 flyby as part of an extended mission. But wouldn’t it be fascinating to one day compare the surfaces of places like Eris and Makemake with what we’ve found at Pluto’s heart?