Friday’s look at the possible composition of Pluto’s Sputnik Planum took me into a deep enough dive on the two papers — Pluto gets my full attention! — that I ran out of time. I had planned to include the images below in that post, but we can do that this morning as a reminder that New Horizons shows no signs of running out of data. What caught my eye here was the possible presence of a cloud, which you can see at the top right of the left image, and in the top inset image.

The wispy structure is tens of kilometers across (the entire inset measures about 230 kilometers) and if it is a cloud, it’s the only one we’ve yet picked out of the New Horizons imagery. But if you consider the rest of the image, it would make sense that we could see a cloud here — notice how the haze layers are brightened by the sunlight that grazes Pluto’s surface at a low angle. Also in the top right inset, the southern parts of Sputnik Planum’s nitrogen ice fields show up (click the image to enlarge), along with peaks of the Norgay Montes. 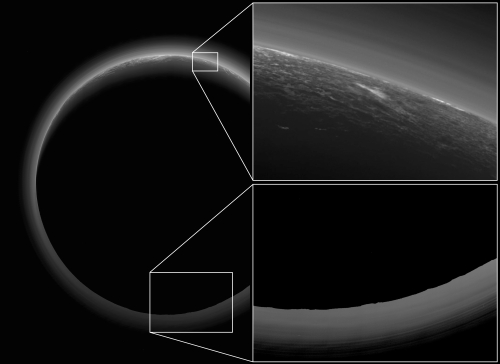 Image: Looking back at Pluto with images like this gives New Horizons scientists information about Pluto’s hazes and surface properties that they can’t get from images taken on approach. The image was obtained by New Horizons’ Ralph/Multispectral Visual Imaging Camera (MVIC) approximately 21,550 kilometers from Pluto, about 19 minutes after New Horizons’ closest approach. The image has a resolution of 430 meters per pixel. Pluto’s diameter is 2,374 kilometers. Credit: NASA/Johns Hopkins University Applied Physics Laboratory/Southwest Research Institute.

Here we’re at a high phase angle, meaning the Sun is on the other side of the dwarf planet as New Horizons leaves the system. The Planetary Society’s Emily Lakdawalla, who is an expert on spacecraft imagery, explains phase angle in typically clear and concise terms:

“Phase angle” means the angle from the Sun, to the target being observed, to the observer — it’s basically a number applied to the descriptive terms we use for lunar phases like crescent, half, gibbous, and full.”

Which means that a full moon is the equivalent of zero phase, while a half moon is a phase angle of 90 degrees. A high phase angle marks a new moon. Back in 2009, Emily wrote an outstanding post on the appearance of Saturn’s moons at different phase angles, as viewed of course by the Cassini spacecraft. This next bit is also worth quoting:

Cassini has returned well over 200,000 images from the Saturn system, but it hasn’t surveyed every moon at every latitude and longitude at every possible phase angle; we do the best we can with what we have, and always hope to get more data. If you’ve ever wondered what the point is in Cassini getting more and more images of the moons, this is why — Cassini will never fully sample every possible combination of latitude, longitude, and phase; more images will fill in gaps and make a more complete picture of the moon’s photometric behavior, which tells us what its surface is made of and how it varies from place to place.

How much more strongly those words apply to New Horizons, which while giving us a treasure trove of data, was unable in its fast flyby to depict large portions of Pluto’s surface in any detail. I know we’ll get back out there again, but as I mentioned at the end of Friday’s post, I’m impatient. I want to get to Eris, and Haumea, and Makemake, and make the kind of studies that will surely yield still more surprises among the ice worlds. Sputnik Planum is yet one more incentive: Possible bergs of water ice floating amidst a millennially elastic nitrogen sea.

Have another look at the Pluto imagery at the top of the post, where the inset at bottom right brings out further detail on the night side. The high phase angle in this case helps us tease out valleys and peaks that were not nearly as apparent in the days before New Horizons’ closest approach. The inset shows us a scene approximately 750 kilometers wide, a twilight view that only becomes apparent because of the relative positions of spacecraft, dwarf planet and Sun. And below is the view without insets, added here to provide a bit more of the ‘wow’ factor. 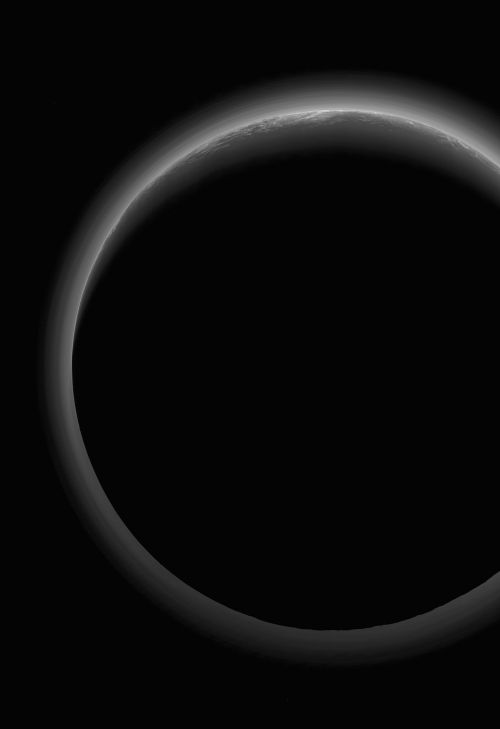 Image: The view without inset imagery. An uninterrupted look at Pluto at high phase angle shows sunlight filtering through the dwarf world’s atmospheric hazes. All of this is a reminder of how much good science we can do after closest approach. Credit: NASA/Johns Hopkins University Applied Physics Laboratory/Southwest Research Institute.