One reason for catching up with recent planetary science here in the Solar System is the upcoming arrival of Juno, which enters into polar orbit around Jupiter on July 4. Juno’s arrival is a reminder that the past year has been packed with interesting news from places like Pluto/Charon (New Horizons), Comet 67P/Churyumov-Gerasimenko (Rosetta), and the topic of today’s post, the intriguing dwarf planet Ceres, as studied by the orbiting Dawn spacecraft.

But the recent Ceres news hasn’t just involved Dawn. Paolo Molaro (INAF-Trieste Astronomical Observatory) had led a study looking at the bright spots Dawn found upon approaching Ceres last year. The data Molaro and team drew on came from the European Southern Observatory’s 3.6-meter instrument at La Silla and its HARPS spectrograph, which have shown us not only the motion of the bright spots as Ceres rotates but also variations that indicate volatile material within them. The suggestion is that this material evaporates when exposed to sunlight.

Ceres’ nine-hour rotation produces a small but measurable Doppler effect, with the bright spots expected to affect the spectrum of the reflected light, producing what shows up as a radial velocity variation within the overall Doppler rotational measurement. But the resulting measurements were more complex than expected, indicating a change in the reflectivity of the bright features in Occator crater. Says co-author Antonino Lanza (INAF-Catania Astrophysical Observatory), a co-author of the study:

“The result was a surprise. We did find the expected changes to the spectrum from the rotation of Ceres, but with considerable other variations from night to night.” 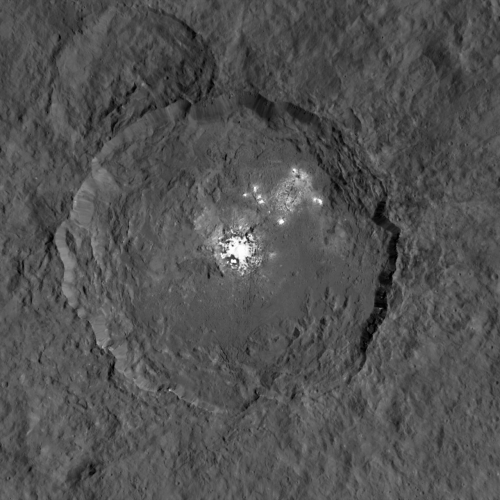 Image: The bright spots on Ceres as imaged by the Dawn spacecraft at an altitude of approximately 1500 kilometers. Credit: NASA/JPL-Caltech/UCLA/MPS/DLR/IDA.

The changes in albedo vary from night to night, showing up as random patterns on short and long timescales. If, as has been suggested, the reflective material in the bright spots is fresh water ice or hydrated magnesium sulfates, then these changes could be caused by evaporation, forming highly reflective plumes. Still unknown is the energy source that seems to be driving the leakage of material from deeper below.

The work plays interestingly off other recent observations, as the paper notes:

Perna et al. (2015) found variations in the slope of visible spectra at the level of 2-3 percent over 1000 Angstrom with a variation in the relative reflectivity of about 10 percent in the region between 500 and 800 nm. Herschel detected water vapor plumes erupting off the surface of Ceres, which may come from volcano-like ice geysers (Küppers et al. 2014). The recent Dawn observations suggest that the bright spots could provide some atmosphere in this particular region of Ceres confirming Herschel’s water vapor detection (Witze 2015). It has been noted that the spots appear bright at dawn on Ceres while they seem to fade by dusk. That could mean that sunlight plays an important role, for instance by heating up ice just beneath the surface and causing it to blast off some kind of plume or other feature.

This description would account for plumes quickly losing their reflectivity as sunlight conditions change, only to form again in a cycle of evaporation and freezing that is also reflected in the radial velocity measurements from HARPS. Subsequent analysis of data from Dawn has shown bright localized areas that are consistent with hydrated magnesium sulfates, including a bright pit on the floor of the Occator crater that shows probable sublimation of water ice. Haze clouds are thus produced, appearing and disappearing in a regular daily cycle.

This ‘diffuse haze,’ as the authors describe it, fills the floor of Occator and then disappears almost completely at dusk, providing a possible counterpart to the radial velocity variability that Molaro and team have detected. That’s useful, because if both are produced by the same cause, then we have a way to continue to monitor daily activity on Ceres even after the Dawn mission ends. Further radial velocity observations and analysis of the Dawn imagery could confirm this possibility.