In late 2015, an international team led by David Sing (University of Exeter, UK) studied ten ‘hot Jupiters’ to try to figure out why some of these planets have less water in their atmospheres than expected from earlier modeling. Sing and company were working with transmission spectroscopy, possible when a planet transits its star and starlight is filtered by the planet’s atmosphere. The team used data from the Hubble instrument as well as the Spitzer Space Telescope, covering wavelengths ranging from the optical into the infrared.

A cloudy planet appears larger in visible light than in infrared, the difference in radius at the two wavelengths being used to show whether the atmosphere is cloudy or clear. The result, published in Nature, concluded that there was a correlation between hazy and cloudy atmospheres and scant detection of water. In other words, clouds were simply hiding the expected water vapor, and dry hot Jupiters were ruled out. It’s an important finding because dry hot Jupiters imply planets that formed in an environment deprived of water.

As interesting as the Sing study was, it’s helpful to have its findings confirmed by new work using data from the Hubble Wide Field Camera 3. Before now, we had information from a dozen different studies using varying methods of analysis, looking at Hubble’s detection of water vapor in the atmospheres of 10 hot Jupiters, while nine others showed no water at all. The new work, led by Aishwarya Iyer, a JPL intern and graduate student, standardized the data by combining the datasets for all 19 hot Jupiters to create an average overall light spectrum. 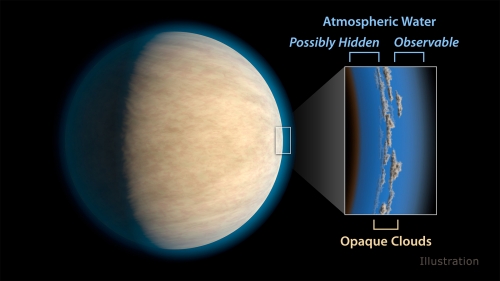 Image: Hot Jupiters, exoplanets around the same size as Jupiter that orbit very closely to their stars, often have cloud or haze layers in their atmospheres. This may prevent space telescopes from detecting atmospheric water that lies beneath the clouds, according to a study in the Astrophysical Journal. Credit: NASA/JPL-Caltech.

It turns out that for almost all these planets, haze or clouds were a factor, blocking on average half the water in their atmospheres and preventing our instruments from detecting substantial amounts of water vapor. Says Iyer:

“Clouds or haze seem to be on almost every planet we studied. You have to be careful to take clouds or haze into account, or else you could underestimate the amount of water in an exoplanet’s atmosphere by a factor of two… In some of these planets, you can see water peeking its head up above the clouds or haze, and there could still be more water below.”

What we still don’t know is the composition of these hazes and clouds, leaving much work for upcoming space observatories like the James Webb Space Telescope, scheduled for launch in 2018. Key to understanding hot Jupiters is to learn whether they formed in their current positions or migrated from much further out in their solar systems. The more we learn about the abundance of water on such worlds, the deeper we’ll be able to delve into their origin.

The paper is Iyer et al., “A Characteristic Transmission Spectrum Dominated by H2O Applies to the Majority of HST/WFC3 Exoplanet Observations,” Astrophysical Journal Vol. 823, No. 2 (abstract).

Next post: The Use of Extraterrestrial Resources to Facilitate Space Science and Exploration