Before getting into today’s subject, the discovery of an interesting long-period circumbinary planet, I want to make another pitch for Centauri Dreams readers to support the Kickstarter campaign for Tabby’s Star. I’ve written often about this mysterious star whose light curves are anomalous and demand further study. Trying to find out what’s happening around KIC 8462852 means acquiring more data, and the Kickstarter campaign would provide an entire year of observations using the Las Cumbres Observatory Global Telescope Network.

We’re now down to 48 hours and of the $100,000 needed, about three-fourths has been raised. Coming down the homestretch, the remaining $24,000 should be achievable, but it looks to be a dramatic finish. If you haven’t been following the KIC 8462852 story, you can check the archives here, or for a quick overview, see my article A Kickstarter Campaign for KIC 8462852. Whatever you can do to help would be hugely appreciated as we try to learn as much as possible about what Penn State’s Jason Wright has called ‘the most mysterious star in our galaxy.’

On to the ongoing meeting of the American Astronomical Society in San Diego, where the discovery of the largest planet yet found around a double-star system was announced. That’s ‘around’ a double-star system rather than ‘in’ one, the planet in question orbiting both stars. Such circumbinary planets are welded to the imagination of Star Wars viewers because of the world Tatooine, the cinematic home of Luke Skywalker, and as in the film, they cast a hypnotic spell on the imagination as we think about what such worlds might look like.

No standing on a planetary surface to watch interesting sunsets here, though. Kepler-1647b is a gas giant, about 3700 light years away in the constellation Cygnus, and at 4.4 billion years old, it’s roughly the same age as the Earth. The planet orbits its eclipsing binary host — two solar mass stars — every 1100 days, making it the longest-period transiting circumbinary planet yet discovered. Despite the lengthy orbital period, three times longer than the Earth’s, Kepler-1647b appears to be in the circumbinary habitable zone for the entire duration of its orbit. Terrestrial moons are theoretically possible, but no evidence for them turns up in the data. 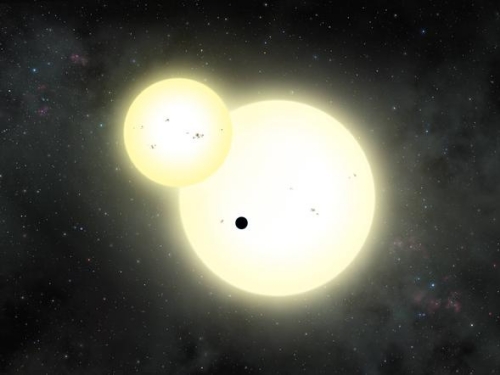 Image: Artist’s impression of the simultaneous stellar eclipse and planetary transit events on Kepler-1647 b. Such a double eclipse event is known as a syzygy. Credit: Lynette Cook.

The discovery of this Jupiter-like world is the work of a team led by Veselin Kostov (NASA Goddard). A transit was originally detected back in 2011 but additional data were needed before the circumbinary planet could be confirmed, part of the problem being the length of the planet’s orbital period. As co-author William Welsh (San Diego State University) notes: “…finding circumbinary planets is much harder than finding planets around single stars. The transits are not regularly spaced in time and they can vary in duration and even depth.”

At three years, Kepler-1647b’s orbital period is the longest of any confirmed transiting planet. The gas giant is also the largest circumbinary planet yet found since the first such world, Kepler-16b, was detected through its transits. We now know of 10 transiting circumbinary planets in eight eclipsing binary systems, and what’s intriguing here is that all of these except Kepler-1647b are near the critical orbital distance for dynamical stability. Get any closer to the binary host, in other words, and their orbits would become unstable.

But Kepler-1647b is on a much wider orbit and its large size contrasts with all previously discovered circumbinary planets, which have been Saturn-sized or smaller. Theoretical models had predicted that Jupiter-mass circumbinary worlds should be less common and should orbit at large distances from the central binary. The discovery of a gas giant on a wide orbit is thus consistent with these models. No long-period circumbinary worlds have been detected before this, a fact whose implications for planetary evolution are discussed in the paper:

As important as a new discovery of a CBP [circumbinary planet] is to indulge our basic human curiosity about distant worlds, its main significance is to expand our understanding of the inner workings of planetary systems in the dynamically rich environments of close binary stars. The orbital parameters of CBPs, for example, provide important new insight into the properties of protoplanetary disks and shed light on planetary formation and migration in the dynamically-challenging environments of binary stars. In particular, the observed orbit of Kepler-1647b lends strong support to the models suggesting that CBPs form at large distances from their host binaries and subsequently migrate either as a result of planet-disk interaction, or planet-planet scattering…

Image: The orbit of Kepler 1647b (white dot) around its two suns (red and yellow circles). Kepler-1647 b was observed transiting each of its two suns during a single orbit (days 0 and 4.3). Credit: Kostov et al.

The paper is Kostov et al., “Kepler-1647b: the largest and longest-period Kepler transiting circumbinary planet,” accepted at the Astrophysical Journal (preprint). A news release from the University of Hawaii at Manoa is also available.

Next post: Structure and Composition of a White Dwarf Planet