I would like to thank the many Centauri Dreams readers who contributed to the successful Kickstarter campaign to fund a year’s worth of study of KIC 8462852. As I write, there is less than an hour to go, but we have already gone well over the needed $100,000 mark. Congratulations to Tabitha Boyajian, and thanks for all the work she and her colleagues have put into this effort. Now we have a year of observations ahead using the Las Cumbres Observatory Global Telescope Network. The long-term observations will be crucial because we don’t know what to expect in terms of sudden dimming in this star’s light curve.

What a pleasure it is to write for this audience. Readers here have played a large role in pushing this project over the top, and we’ll follow the work on KIC 8462852 closely in coming days. Meanwhile, have a look at Penn State’s Jason Wright discussing ‘Tabby’s Star.’

If KIC 8462852 is a star that some believe is becoming less bright over time (the controversy between Bradley Schaefer and Michael Hippke is well documented here), FU Orionis is the opposite, a star whose notable brightening in 1936 is the most extreme such event we have seen around a star of Sun-like size. This is intriguing stuff, because we seem to be looking at a solar system in its infancy, undergoing a process that our own Sun may have experienced on the way toward the formation of the planets in our system. If so, this stellar activity would have changed the chemistry in the surrounding disk, with implications for how planets form.

The 1936 brightening event took FU Orionis, some 1500 light years away in the constellation Orion, from an apparent visual magnitude of 16.5 to 9.6, and the star is now around magnitude 9, with visible light observations showing a slow fade in progress. Stars like this — V1057 Signi is another — are young pre-main sequence stars in a class named after FU Orionis and nicknamed FUors. All exhibit extreme changes in magnitude and spectral type, evidently caused by the star consuming inner disk materials in a sudden feeding spree.

Joel Green (Space Telescope Science Institute) and colleagues wondered when FU Orionis might return to pre-1936 brightness levels, and what effect such brightening events could have on early system formation. The team used infrared data from the Stratospheric Observatory for Infrared Astronomy (SOFIA) and checked it against Spitzer Space Telescope data from 2004. Green presented the results, showing the star’s behavior over the twelve-year interval, at the just concluded meeting of the American Astronomical Society in San Diego. 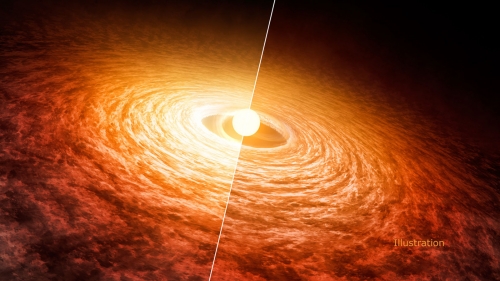 Image: This artist’s concept illustrates how the brightness of outbursting star FU Orionis has been slowly fading since its initial flare-up in 1936. The star is pictured with the disk of material that surrounds it. Researchers found that it has dimmed by about 13 percent at short infrared wavelengths from 2004 (left) to 2016 (right). Credit: NASA/JPL-Caltech.

The brightening of FU Orionis observed in 1936 was the result of the infant star devouring gas and dust from its surrounding disk, a three-month process that caused it to become 100 times brighter in short order, heating the disk to temperatures up to 7000 K. It’s clear from the most recent study that the star continues to ingest disk material. According to this JPL news release, it has consumed the equivalent of 18 Jupiters in the eighty years since the first outburst.

Even so, the SOFIA measurements confirm that the total amount of visible and infrared light from FU Orionis has decreased by about 13 percent during the twelve years since the Spitzer data were taken. The dimming is occurring at short infrared wavelengths only, an indication that about 13 percent of the hottest disk material has disappeared even as cooler materials have remained intact. Says Green:

“A decrease in the hottest gas means that the star is eating the innermost part of the disk, but the rest of the disk has essentially not changed in the last 12 years. This result is consistent with computer models, but for the first time we are able to confirm the theory with observations… The material falling into the star is like water from a hose that’s slowly being pinched off. Eventually the water will stop.”

Based on this work, we could expect FU Orionis to return to 1936 brightness levels within the next several hundred years. Still unanswered is the question of what set off the rampant activity in the first place. The fact that a protoplanetary disk can experience such sudden activity is striking. Green’s team believes that a similar event in the early Sun’s history could explain why materials close to the Sun have a different composition than those farther out, accounting for the different abundances of certain elements on Mars than on the Earth. The brightening would have had a much larger effect on the inner disk than on more distant materials.