As we saw yesterday, there is a case to be made that the ocean beneath Pluto’s ice is still liquid, based on phase changes in ice under varying pressures and temperatures. Today we turn to another world with interesting oceanic possibilities, Enceladus. Here the data are problematic and contradictory. Flybys by the Cassini Saturn orbiter detected tiny deviations in the spacecraft’s trajectory that could be used to measure the gravity of the Saturnian moon.

Weighing these perturbations in the spacecraft’s motion against the known topography of Enceladus, scientists could draw tentative conclusions about the moon’s internal structure. Enceladus appeared to be internally asymmetric, with an ice shell between 30 and 40 kilometers thick in the southern hemisphere, perhaps thickening to 60 kilometers at the equator. Moreover, the Cassini data were not sufficient to conclude anything about the extent of the ocean. Did it extend beneath the entire shell, or was it confined largely to the southern polar regions?

Work out of Cornell University in 2015 charted some 5800 surface features at different angles and times, bringing dynamical modeling and statistical analysis to bear on Enceladus’ interior. Peter Thomas and team found that they could use a wobble in the moon’s rotation — a libration — to show that the surface of Enceladus was not solidly connected with its core. The libration, then, told us that the ocean was global. It also pointed to thinner ice, with a mean thickness of about 20 kilometers, a result inconsistent with the Cassini gravity studies.

To resolve the contradiction, a new model from a team of international researchers now proposes an asymmetric model with a strong heat source. The work sees a rocky core with radius of 185 kilometers, an internal ocean about 45 kilometers deep, and an ice shell with a mean thickness of around 20 kilometers except at the south pole, where it appears to be less than 5 kilometers thick. The ocean in this model comprises about 40 percent of the total volume of Enceladus, and the salt content is estimated to be similar to that of Earth’s oceans. 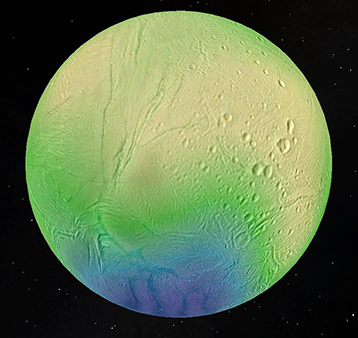 Relatively thin ice in the south polar regions is promising for future exploration. But while this model gives us a way to reconcile previous results, it also offers another question. A thinner ice shell holds less heat, which means tidal stresses caused by Saturn can no longer explain the heat flow affecting the south polar region. We must be dealing with strong heat production deep inside Enceladus that may be driving hydrothermal venting on the ocean floor.

And yes, complex organic molecules have been found in the plumes from Enceladus, making for an astrobiologically interesting scenario when coupled with a warm ocean. But we’ll need a closer look to find out whether the model put forth by Ondřej Čadek (Charles University, Prague) and his colleagues at the Royal Observatory of Belgium and the Laboratoire de Planétologie Géodynamique de Nantes holds up. Thin ice at the south pole could offer us a window into the ocean, a study relevant not just to Enceladus but many icy objects in the outer system.