Operations Throughout the Solar System

A reminder of how challenging it is to operate with solar power beyond the inner system is the fact that Juno carries 18,698 individual solar cells. Because it is five times further from the Sun than the Earth, the sunlight that reaches Juno is 25 times less powerful, a reflection of the fact that the intensity of light is inversely proportional to the square of the distance from the source.

In other words, if you’re going to use solar power this far out from the Sun, you’d better have plenty of surface area. Juno carries three 9-meter solar arrays that could, at Earth’s distance of 1 AU, generate as much as 14 kilowatts of electricity. But at Jupiter’s distance, controllers are expecting a realistic output of about 500 watts. Making solar power operations possible here is improved solar cell performance and a mission plan that avoids Jupiter’s shadow. 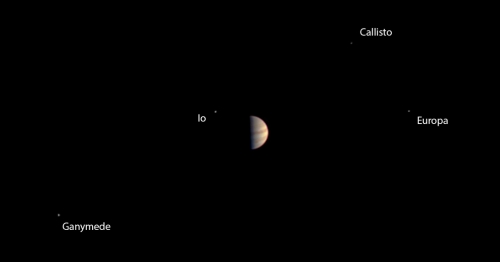 Image: This is the final view taken by the JunoCam instrument on NASA’s Juno spacecraft before Juno’s instruments were powered down in preparation for orbit insertion. Juno obtained this color view on June 29, 2016, at a distance of 5.3 million kilometers from Jupiter. Credit: NASA/JPL-Caltech/SwRI/MSSS.

The European Space Agency’s Rosetta mission is coping with the same issue. Rosetta will end its mission to Comet 67P/Churyumov-Gerasimenko on 30 September with a controlled descent to the surface. The increasing distance between the Sun and the comet alongside which Rosetta travels means that its own solar power will be insufficient to operate its instruments or downlink data. Thus Rosetta is destined to join the Philae lander on the comet’s surface.

“We’re trying to squeeze as many observations in as possible before we run out of solar power,” says Matt Taylor, ESA Rosetta project scientist. “30 September will mark the end of spacecraft operations, but the beginning of the phase where the full focus of the teams will be on science. That is what the Rosetta mission was launched for and we have years of work ahead of us, thoroughly analysing its data.”

Controllers will use much of August to adjust Rosetta’s trajectory, inducing a series of elliptical orbits that will progressively close on the comet. A trajectory change about twelve hours before impact will put the spacecraft on course for final descent. Rosetta will touch down at about half the speed of Philae, but there will be no possibility of communications from the orbiter once it reaches the surface because the high gain antenna will probably not be pointing toward Earth. Even so, we should get some spectacular images at high resolution during the descent.

This ESA news release has more, including mention of the fact that Rosetta entered safe mode last month when about five kilometers from the comet due to dust-related navigation system issues. While the spacecraft recovered, the glitch bears witness to how challenging operations this close to a comet can be. Bringing Rosetta down to the surface may create similar problems. 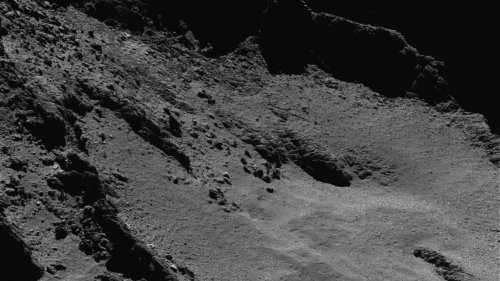 Image: During Rosetta’s final descent, the spacecraft will image the comet’s surface in high resolution from just a few hundred metres. This OSIRIS narrow-angle camera image was taken on 28 May 2016, when the spacecraft was about 5 km from the surface of Comet 67P/Churyumov–Gerasimenko. The scale is 0.13 m/pixel. Credit: ESA/Rosetta/MPS for OSIRIS Team MPS/UPD/LAM/IAA/SSO/INTA/UPM/DASP/IDA.

The Dawn spacecraft has been slotted to remain at Ceres rather than proceed on to the main belt asteroid Adeona. What this means is that we’ll be able to stay close to Ceres while the dwarf planet approaches perihelion, an interesting place to be given the many unanswered questions about this world and its unusual bright spots. A new study published in Nature finds that Ceres’ Occator Crater has the highest concentration of carbonate minerals ever seen outside the Earth.

The primary mineral in the brightest area of Occator is found to be sodium carbonate, the upwelling of which is suggestive of warmer conditions inside Ceres than previously believed. Thus we have an intriguing hint of liquid water in comparatively recent geological time, with the salts as possible remnants of a large internal body of water. Says Maria Cristina De Sanctis (National Institute of Astrophysics, Rome), lead author of the paper on this work:

“The minerals we have found at the Occator central bright area require alteration by water. Carbonates support the idea that Ceres had interior hydrothermal activity, which pushed these materials to the surface within Occator.” 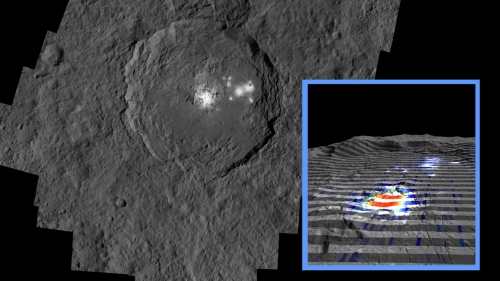 Image: The center of Ceres’ mysterious Occator Crater is the brightest area on the dwarf planet. The inset perspective view is overlaid with data concerning the composition of this feature: Red signifies a high abundance of carbonates, while gray indicates a low carbonate abundance. Dawn’s visible and infrared mapping spectrometer (VIR) was used to examine the composition of the bright material in the center of Occator. Using VIR data, researchers found that the dominant constituent of this bright area is sodium carbonate, a kind of salt found on Earth in hydrothermal environments. Scientists determined that Occator represents the highest concentration of carbonate minerals ever seen outside Earth. Credit: NASA/JPL-Caltech/UCLA/MPS/DLR/IDA.

On to the Kuiper Belt

New Horizons, has been given the go-ahead for an extended mission, which includes a flyby of the Kuiper Belt object 2014 MU69. Although many of us have been taking an extended mission for granted given New Horizons’ unprecedented success, the confirmation brings a sense of relief. The flyby is to take place on January 1, 2019, offering us the chance to look at the kind of ancient object considered to be a building block of the Solar System. As we look ahead, we still have a wealth of data from the Pluto/Charon encounter to receive and analyze.