If you’re looking for liquid water on Titan, prepare to go deep, perhaps as much as 100 kilometers below the Saturnian moon’s crust, which is itself made of ice. When it comes to exoplanets, we always talk about the habitable zone as a place where liquid water could exist on the surface. Titan clearly fails that test. But is it a place where life could exist anyway?

A new paper gets us into this interesting topic by suggesting that prebiotic chemistry — and possibly even biochemistry — could take place on Titan. The work of Martin Rahm and Jonathan Lunine, working with colleagues David Usher and David Shalloway (all at Cornell University), the study sees Titan as a ‘natural laboratory’ for exploring non-terrestrial prebiotic chemistry given the presence of liquid hydrocarbons and the lack of liquid surface water. 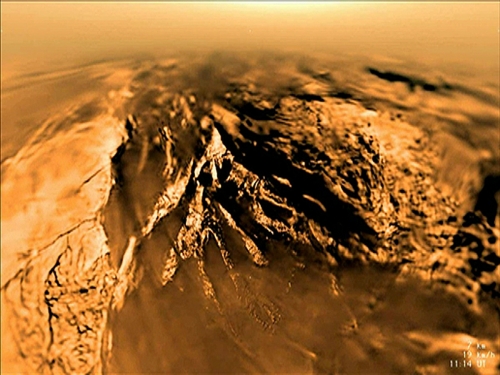 Image: An image of Titan’s surface, as taken by the European Space Agency’s Huygens probe as it plunged through the moon’s thick, orange-brown atmosphere on Jan. 14, 2005. Today, Cornell scientists have chemical evidence that suggests prebiotic conditions may exist there. Credit: ESA/NASA/JPL-Caltech/Univ. of Arizona.

We are in the realm of prebiotic chemistry in an exceedingly alien environment. Says Rahm:

“We are used to our own conditions here on Earth. Our scientific experience is at room temperature and ambient conditions. Titan is a completely different beast. So if we think in biological terms, we’re probably going to be at a dead end.”

Titan’s rivers, lakes and seas have captivated us since the Huygens probe gave us our first glimpse beneath the clouds, and we know that they are filled with liquid methane and ethane flowing beneath a dense atmosphere of nitrogen and methane. Chemistry here is driven by solar photons that produce hydrocarbons and nitrogen-bearing organics. The Cassini mission has shown us that hydrogen cyanide (HCN) is the most abundant nitrogen-bearing product resulting from this atmospheric chemistry, condensing into aerosols that, upon reaching the surface, are evidently transformed into other molecules and polymers (chemical compounds where molecules are bonded together in long, repeating chains).

One of the polymers that may emerge from hydrogen cyanide’s reactions with other molecules is polyimine (pronounced poly–ee–meen), which is flexible even under the low temperatures found on Titan. The paper analyzes the properties of polyimine (pI) and finds that even in these conditions, it can absorb solar energy and become a factor in possible life:

Regardless of the specific chemistry involved, life requires polymorphic molecules that combine flexibility with the ability to form the organized metastable structures needed for function, adaptation, and evolution. This, almost certainly, requires extended molecules capable of intermolecular and intramolecular hydrogen bonding, but such bonds need not involve oxygen; nitrogen is a potential surrogate.

The polymorphism of polyimine compounds could be the key to prebiotic chemistry in the cryogenic conditions of Titan. The authors’ work on pI shows that complex, ordered structures can emerge. Moreover, polyimine is found to be able to absorb a wide range of photons through a relatively transparent ‘window’ in Titan’s atmosphere, thus having a source of energy at its disposal to catalyze prebiotic chemistry even without the presence of water.

But the larger seas that are so striking in Cassini imagery are not necessarily where it would first emerge. These are mostly methane, with significant amounts of ethane and nitrogen. Hydrogen cyanide is mostly insoluble in such mixtures, making it unlikely that polymers would form there. The paper argues that we’re more likely to find hydrogen cyanide undergoing reactions in tidal pools near the shores of the seas and lakes, where the environment is dynamic because of tidal effects (Titan’s orbit is non-circular), and hemispherical variations in sunlight:

Seasonal emptying and refilling of the smaller liquid “lakes,” such as Ontario Lacus in the Southern Hemisphere, and longer-timescale variations in sea levels associated with Saturn’s orbital variations, may allow cycling of these materials between liquid and dry (shoreline) environments, where they would be well positioned to undergo further chemistry.

We learn that possible prerequisites for life do exist on Titan, but what lies ahead is a deeper understanding of how this chemistry evolves. In terms of possible future missions, remote sensing here gives way to the need for direct chemical analysis on the surface, doubtless through a lander sent to shoreline areas of the lakes and seas. As the paper notes, “…only future exploratory missions to Titan can test the hypothesis that natural chemical systems evolve chemical complexity in almost any circumstance.”

The paper is Rahm et al., “Polymorphism and electronic structure of polyimine and its potential significance for prebiotic chemistry on Titan,” published online by Proceedings of the National Academy of Sciences 4 July 2016 (abstract). Thanks to Phil Tynan for an early tip on this work.

Next post: Directly Imaged Planet in a Triple Star System