Into the annals of oddball orbits now comes HD 131399Ab, a planet whose wide orbit inside a triple-star system is unlike anything we’ve yet seen. 320 light years from Earth in the constellation Centaurus, this is a gas giant of about four Jupiter masses that was discovered through direct imaging. The discovery was made with the European Southern Observatory’s Very Large Telescope in Chile using the SPHERE (Spectro-Polarimetric High-contrast Exoplanet REsearch) instrument, which exploits differential imaging to screen stellar light from planetary signatures.

HD 131399Ab is the first exoplanet discovered by SPHERE, which incorporates adaptive optics, a coronagraph and, with its differential imaging features, distinguishes a planet by the polarization of reflected light. Stars emit unpolarized light — here the electromagnetic waves oscillate randomly, and in different directions, as explained in this ESO news release. But light reflected from a planetary surface is partially polarized, so that the light waves oscillate in a well-defined plane. Light from the planet is thus much easier to isolate. 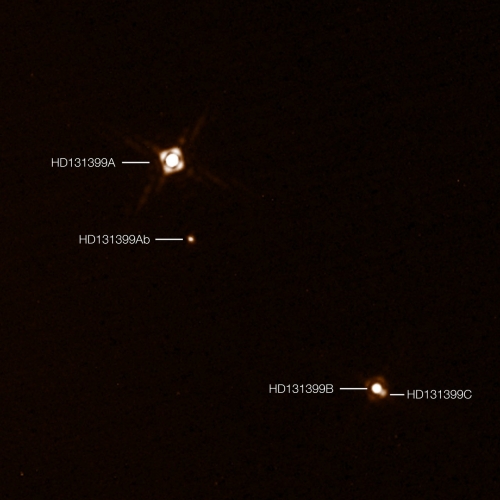 Image: This annotated composite image shows the newly discovered exoplanet HD 131399Ab in the triple-star system HD 131399. The image of the planet was obtained with the SPHERE imager on the ESO Very Large Telescope in Chile. This is the first exoplanet to be discovered by SPHERE and one of very few directly-imaged planets. This picture was created from two separate SPHERE observations: one to image the three stars and one to detect the faint planet. The planet appears vastly brighter in this image than in would in reality in comparison to the stars. Credit: ESO/K. Wagner et al.

And what a planet this is, or more precisely, what an orbit it follows. The brightest star here is HD 131399A, about 80 percent more massive than the Sun. It, in turn, is orbited by HD 131399B and HD 131399C, which are roughly 300 AU from the primary. B and C are separated by about 10 AU, the distance between the Sun and Saturn.

The planet HD 131399Ab orbits HD 131399A at about 80 AU, with an orbital period of 550 years. From the perspective of the planet, all three stars would appear close together for a large part of the year. But as the planet moves along in its orbit, things change. First-year PhD student Kevin Wagner (University of Arizona), lead author of the paper announcing the discovery, explains:

“For about half of the planet’s orbit, which lasts 550 Earth-years, three stars are visible in the sky, the fainter two always much closer together, and changing in apparent separation from the brightest star throughout the year. For much of the planet’s year the stars appear close together, giving it a familiar night-side and day-side with a unique triple-sunset and sunrise each day. As the planet orbits and the stars grow further apart each day, they reach a point where the setting of one coincides with the rising of the other – at which point the planet is in near-constant daytime for about one-quarter of its orbit, or roughly 140 Earth-years.” 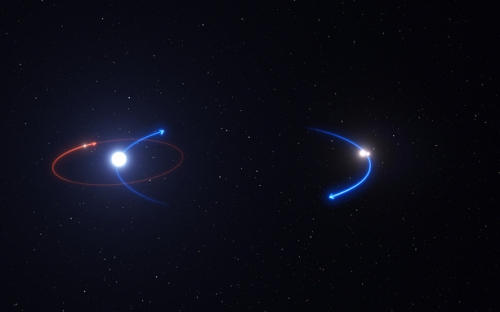 Image: This graphic shows the orbit of the planet in the HD 131399 system (red line) and the orbits of the stars (blue lines). (Credit: ESO).

This is an orbit whose stability would be tenuous. In fact, the question of long-term stability cannot be decided without further observations to constrain the planet’s orbit. Says Daniel Apai (University of Arizona), one of the co-authors of the paper on this work:

“If the planet were further away from the most massive star in the system, it would be kicked out of the system. Our computer simulations have shown that this type of orbit can be stable, but if you change things around just a little bit, it can become unstable very quickly.”

The ESO animation below puts the system in motion.

Image: This artists impression shows the orbit of the planet in the triple-star system HD 131399. Two of the stars are close together and the third, brighter component is orbited by the gas giant planet HD 131399Ab. Credit: ESO/L. Calçada/M. Kornmesser.

Consider all the factors at work here: We have a planet on the widest known orbit within a multi-star system, a situation that is dynamically unique. HD 131399Ab is one of the lowest mass planets yet imaged directly, and also one of the coldest, at approximately 850 Kelvin. And at about 16 million years old, it is also one of the youngest exoplanets we’ve found. Remember that multi-star systems are about as common as single stars, giving us an idea of the variety we’re likely to find and its significance as we analyze scenarios for planet formation.