A brown dwarf as a ‘quieter’ version of Jupiter? That’s more or less the picture offered in a new paper on WISE 0855 from Andrew Skemer (UC-Santa Cruz) and colleagues. Here we’re working in the Solar System’s close neighborhood — WISE 0855 is a scant 7.2 light years from Earth — and we’re observing an object that is the coldest known outside of the Solar System. That makes the observational task difficult, but it has yielded rich results in the discovery of clouds of water or water ice.

We learn that WISE 0855 is about five times the mass of Jupiter, with a temperature in the range of 250 K (-23 Celsius). This is the nearest known object of planetary mass, but it is too faint to characterize with conventional spectroscopy — separating light into its component wavelengths — in the optical or near infrared. But it turns out the object can be studied through thermal emissions from deep in its atmosphere in the range of 5 µm (a range frequently used to study Jupiter’s own deep thermal emissions). Skemer calls spectroscopy of such a faint object in this 5 µm ‘window’ “challenging but not impossible.”

And while we have no current space observatories that can perform 5 µm spectroscopy, we can use ground-based instruments working through the 4.5-5.2 µm atmospheric window of our own planet, although the target is a dim object indeed and observations are limited by the brightness of the Earth’s sky. WISE 0855 becomes the faintest object yet detected with ground-based 5 µm spectroscopy, fully five times fainter than the previous such detection.

The observations were performed with the Gemini-North telescope and the Gemini Near Infrared Spectrograph at Mauna Kea, where the infrared background is the lowest for any telescope of its class. Skemer and team observed WISE 0855 over a thirteen night period for a total of about 14 hours. The resulting spectrum reveals the presence of atmospheric water vapor and clouds. The results depict an object with an appearance similar to Jupiter, a place that fits the team’s calculations involving an atmosphere dominated by water vapor. 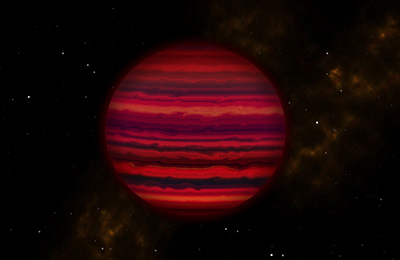 Image: Artist’s rendering of WISE 0855 as it might appear if viewed up close in infrared light. Credit: Joy Pollard, Gemini Observatory/AURA.

The cloud models used here make no assumptions about the composition of cloud being observed, but the paper notes that the temperature of WISE 0855 is such that a composition of water or water ice is likely. Even so, the authors add that the fit of their cloudy model to the observations is not exact, suggesting that there is further complexity here, perhaps involving the vertical and horizontal structure of the clouds, which would affect the brown dwarf’s appearance.

How to move forward from these results? The paper suggests the following:

To understand the nature of clouds and vertical mixing in cold gas giants, we need 5 µm spectra of objects across a continuum of temperatures. After Jupiter (130 K) and WISE 0855 (250 K), the next coldest object with a 5 µm spectrum is Gl 570D (700 K) (Sorahana & Yamamura 2012). In the near term, ground-based telescopes have the sensitivity to obtain spectra of a handful of objects in this temperature range. Future facilities, like the James Webb Space Telescope (JWST), will have the sensitivity to characterize cold gas giants with higher precision, and at wavelengths not possible from Earth (Morley et al. 2014).

As mentioned above, it will be interesting to see what we can learn about Gl 570D, which is a cool brown dwarf about 1500 AU from the triple star system Gl 570, itself composed of a K-class dwarf separated by 190 AU from two red dwarfs that orbit the primary. The brown dwarf here has an estimated mass about 50 times greater than Jupiter and a temperature of about 700 K. The system is approximately 19 light years from Earth.

And we should bear in mind that next-generation Earth-based telescopes (the so-called Extremely Large Telescopes, or ELTs) will have the ability to study large samples of exoplanets in the 5 µm atmospheric window, allowing us to compare not just them but brown dwarfs of various sizes and temperatures with the gas giants here in the Solar System.

Given WISE 0855’s similarities to Jupiter especially regarding the water absorption features in its spectrum, it’s interesting to note the differences. The researchers found that the spectrum of WISE 0855 does not show a strong phosphine (PH3) signal:

So we have a less turbulent atmosphere than Jupiter’s on a cloudy world that probably looks much like the giant planet. We’re probing dynamical and chemical features of an ultra-cool brown dwarf, characteristics we have long studied in our own gas giants. Lacking the mass to spark fusion following the gravitational collapse of the original proto-stellar cloud, WISE 0855 is an ‘almost star’ that may eventually teach us much about the formation of such objects as we expand our range of observations to perform similar studies of gas giant exoplanets.

Next post: Into the Nebula: Low-Mass Objects in Orion