A team led by Lucas Cieza (Universidad Diego Portales, Santiago, Chile) has produced the first image directly showing the water snowline in a protoplanetary disk, using the Atacama Large Millimeter/submillimeter Array (ALMA). It’s fascinating to actually see a mechanism we’ve long discussed in these pages when analyzing exoplanetary systems (or for that matter, our own). We have a young star called V883 Orionis to thank for the possibility. It’s an FU Orionis star of the kind we recently looked at in FU Orionis: Implications of Sudden Brightening for Planet Formation. And here, too, the implications are rich.

FU Orionis stars are young, pre-main sequence objects that can produce extreme changes in magnitude and spectral type. The eponymous FU Orionis itself, 1500 light years away in the constellation Orion, underwent an event in 1936 that took it from a visual magnitude of 16.5 to 9.6. In the case of V883 Orionis, a similar outburst in temperature and luminosity has heated the protoplanetary disk while making the star 400 times more luminous than the Sun, although it is only 30% more massive. The snowline has been pushed out to a distance great enough for us to observe. 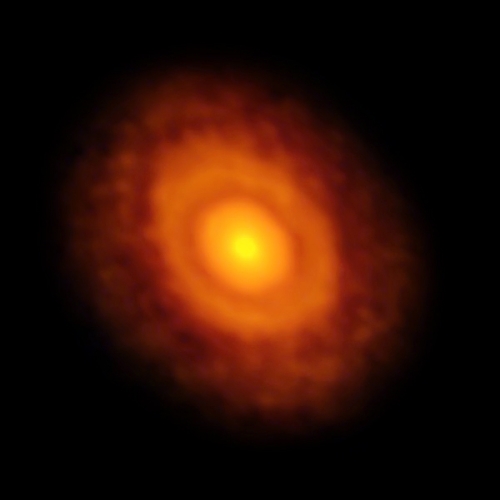 Image: This image of the planet-forming disc around the young star V883 Orionis was obtained by ALMA in long-baseline mode. This star is currently in outburst, which has pushed the water snowline further from the star and allowed it to be detected for the first time. The dark ring midway through the disc is the water snowline, the point from the star where the temperature and pressure dip low enough for water ice to form. Credit: ALMA (ESO/NAOJ/NRAO)/L. Cieza.

The protoplanetary disk surrounding a young star is usually gaseous within several AU of the star, but beyond this distance, lowering temperatures and pressure allow water to sublimate; i.e., water molecules can go directly from the gaseous state to form ice on dust grains and other particles, with no intervening liquid state. Sublimation contributes to the ability of dust grains to clump together, a key process in the beginning of planet formation.

Because water freezes at a relatively high temperature, the water snowline is usually too close to a young star to allow observatories to distinguish it. But because of the star’s recent outburst, V883 Orionis’ snowline has been pushed out ten times as far as usual, to a distance of about 40 AU, roughly the size of Pluto’s orbit. This allows ALMA, which has a resolution at this distance of about 12 AU, to produce the above image.

This kind of outburst is likely a stage that most planetary systems go through. In other words, what we are seeing here may well be common in infant systems, giving us a look at how planet formation occurs throughout the galaxy. Bear in mind that the snowlines for other molecules have already been observed. As distance from a star increases and temperatures drop, molecules like carbon dioxide (CO2), carbon monoxide (CO) and methane (CH4) exhibit snowlines of their own, likewise aiding the planet formation process. The snowline of carbon monoxide around TW Hydrae was imaged by ALMA in 2013. 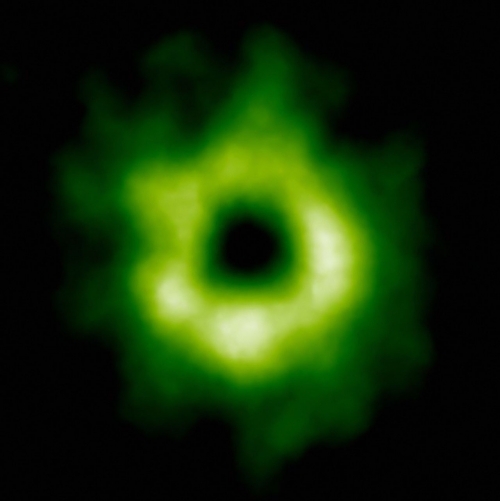 Image: This ALMA image shows the region where carbon monoxide snow has formed around TW Hydrae. The carbon monoxide is shown here in green, and begins at a distance of more than 30 astronomical units from TW Hydrae. Aside from being necessary for planetary and comet formation, carbon monoxide is needed for the creation of methanol, which is a fundamental building block required for life. Credit: ALMA (ESO/NAOJ/NRAO).

We still have much to learn about V883 Orionis-style stellar outbursts, but the assumption is that large amounts of disk material are being consumed by the star, flash-heating the disk. These sudden accretion events add mass to the star while temporarily adjusting the snowlines for various molecules. The presence of the water snowline between Mars and Jupiter during the formation of the Solar System helps us understand how rocky planets form, in a region where water is vaporized well inside the snowline, with gaseous planets forming beyond this limit.

The paper is Cieza et al., “Imaging the water snow-line during a protostellar outburst,” Nature 14 July 2016.

Previous post: Into the Nebula: Low-Mass Objects in Orion