A New Dwarf Planet (and its Implications)

A dwarf planet designated 2015 RR245 (and now in search of a name) has been found in an orbit that takes it out to at least 120 AU. It’s a discovery made by the Outer Solar System Origins Survey (OSSOS), an international collaboration focused on the Solar System beyond Neptune. The goal is to test models of how the Solar System developed by studying the movements of icy objects, many of which may have been destroyed or ejected from the Solar System altogether through movements of the giant planets early in the formation process. 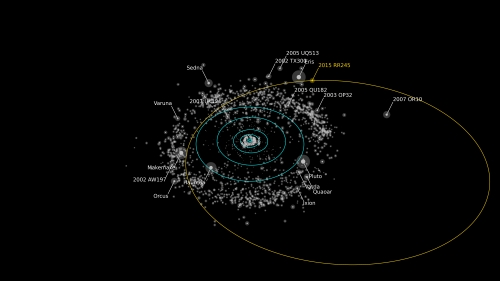 Image: Rendering of the orbit of RR245 (orange line). Objects as bright or brighter than RR245 are labeled. The blue circles show the projected orbits of the major planets. The Minor Planet Center describes the object as the 18th largest in the Kuiper Belt. Credit: Alex Parker/OSSOS team.

We’ve had a close look at one dwarf planet at the edge of the system when New Horizons flew past Pluto a year ago, and with a diameter of roughly 700 kilometers, 2015 RR245 will itself be worthy of future investigation. We now know from the New Horizons example that distant icy worlds like these produce exotic landscapes and unexpected geological processes. But their orbits may tell us just as much as their surface features. Consider:

Perihelion for 2015 RR245 will take place toward the end of this century, though refining its orbit will take time. According to the project’s website, OSSOS can work out TNO orbits in about 16 months on average, which is actually less than 1% of the time it takes them to orbit the Sun. While thinking about these orbits, bear in mind that although the number of TNOs so far discovered is growing, we’re surely seeing a small subset of what must be a vast population.

We’re tracking, in other words, only those objects that are relatively close to the Sun and thus are the easiest to spot. Michele Bannister (University of Victoria BC) touches on the matter in this news release:

“The icy worlds beyond Neptune trace how the giant planets formed and then moved out from the Sun. They let us piece together the history of our Solar System. But almost all of these icy worlds are painfully small and faint: it’s really exciting to find one that’s large and bright enough that we can study it in detail.”

But the fact that we find so few TNOs that are large and bright enough for such study is itself an issue. The second Kuiper Belt Object found (1992 QB1) was discovered over sixty years after the first (Pluto), an indication of how small and faint these objects are. Ethan Siegel speaks to this in an essay for Forbes, noting that objects like 2015 RR245 have extremely eccentric orbits, in this case one with perihelion at roughly 34 AU and aphelion at 120 AU.

We’re reminded that we have not just Kuiper Belt Objects to contend with but scattered disk objects as well (scattered disk objects are considered to be KBOs with large orbital eccentricities), and beyond them the so-called Sednoids. This has implications for the conjectured Planet Nine, whose existence has been inferred through the clustering of a small number of Sednoid objects. Siegel has his doubts, and they’re reinforced by 2015 RR245:

But it’s also possible, as scattered disk objects and elliptical KBOs show, that there are a huge variety of objects with tremendously varied orbits out there, and we’re only seeing a tiny fraction of them. If the objects we’re seeing have even a slight bias to them, it could lead us to jump to all sorts of incorrect conclusions, just as we did decades ago claiming periodic mass extinctions due to asteroid impacts and the Nemesis theory of a second Sun. Incomplete data is what we’ve got, and the first results of OSSOS and the discovery of 2015 RR245 should remind us all of how much more there is — not just in the Universe but even in our Solar System — still left to discover.

Meanwhile, OSSOS plugs away, having already discovered more than five hundred new trans-Neptunian objects. 2015 RR245 is its largest discovery and the only dwarf planet found by the team, which uses the MegaPrime camera, an imager on the 3.6m Canada-France-Hawaii Telescope (CFHT). As larger telescopes like the Large Synoptic Survey Telescope (LSST) come online capable of mapping the entire visible sky in just a few nights, we will doubtless gain a better idea of the actual distribution of these varied objects. That may put to bed once and for all the question of whether a large undiscovered planet is out there at system’s edge.