I suspect most scientists would like to have a moment like the one Stanton Peale, Patrick Cassen and Ray Reynolds experienced when Voyager flew past Io in 1979. How many of us get to see a major idea vindicated in such short order? It was on March 5 that Voyager 1 passed within 22,000 kilometers of Io. A scant three days before, Peale, Cassen and Reynolds had published their prediction that tidal forces should keep the moon’s interior roiling, resulting in volcanic activity. Linda Morabito, on the Voyager navigation team, analyzed Voyager imagery shortly thereafter to discover that volcanoes were indeed active on the surface.

What a triumph for the power of thorough analysis and prediction. Voyager, in fact, found nine plumes on Io, while demonstrating that its surface was dominated by sulfur and sulfur dioxide frost, with extensive lava fields extending for hundred of kilometers. The moon was also observed to have a thin atmosphere consisting primarily of sulfur dioxide.

That thin envelope is now the subject of a new paper from Constantine Tsang (SwRI) and colleagues. We learn that gas emitted from Io’s volcanoes freezes onto the surface when Jupiter moves between Io and the Sun. Sublimation re-creates the atmosphere when sunlight returns. 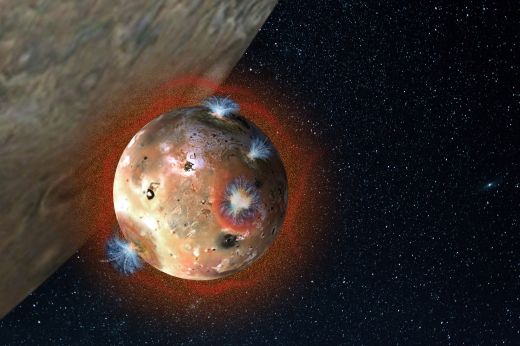 This was the first time that atmospheric collapse and re-building on Io had been observed, a tricky procedure indeed. The scientists used the Gemini North telescope in Hawaii with the Texas Echelon Cross Echelle Spectrograph (TEXES). The latter is a high resolution mid-infrared spectrometer that was able to detect the heat signature of the atmospheric collapse.

Temperatures on Io’s surface drop from -145 degrees Celsius to -170 degrees C when a full eclipse occurs, followed by atmospheric collapse as the sulfur dioxide settles onto the surface. From the paper:

These observations provide the first direct evidence that Io’s primary molecular SO2 atmosphere collapses in eclipse, with SO2 condensing on the surface as SO2 frost. Our observations also allow us to constrain the spatial distribution of Io’s atmosphere. The fact that these observations show SO2 band depths decreasing until they almost disappear implies the atmosphere, at least on the hemisphere centered around 340° that is observed during eclipses, is global and not centered over volcanic hotspots; i.e., localized SO2 over active volcanoes is a minor component of the atmosphere on this hemisphere.

What we see is a moon whose tenuous atmosphere is in a continual cycle of collapse and restoration. It’s known that the volcanoes of Io are the source of the sulfur dioxide in the atmosphere, but we now have a demonstration of the power of sunlight to control atmospheric pressure as it changes the temperature of surface ice, resulting in the sublimation that rebuilds the atmosphere after an eclipse. This is a daily phenomenon on Io, where the day is 1.7 Earth days long, and an eclipse by Jupiter occurs for two hours out of every day. 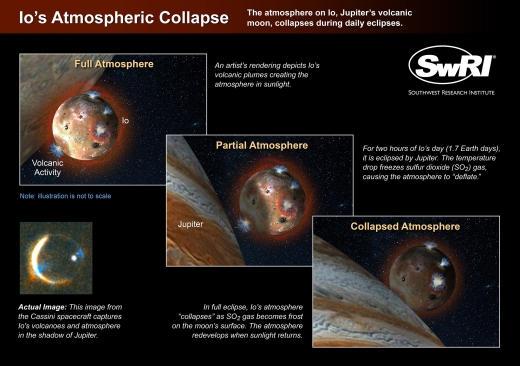 These findings are still a work in progress, for recent observations by the Hubble instrument have contradicted them by suggesting that Io’s atmosphere does not respond quickly to sunlight as the moon comes out of eclipse. There may, in other words, be longitudinal variations here. Where the atmosphere is thickest, emission from the volcanoes may mask the sublimation seen in the Gemini North data. It will take further observations to resolve the matter.

The paper is Tsang et al., “The Collapse of Io’s Primary Atmosphere in Jupiter Eclipse,” published online by the Journal of Geophysical Research 2 August 2016 (full text).