We’ve all come to terms with the fact that beyond the orbit of Neptune there exists a large number of objects. These trans-Neptunian objects (TNOs) substantially altered the almost sedate view of the Solar System that prevailed in the first half of the 20th Century, showing us that far from being a tame and orderly place of planets, asteroids and comets, we were in a system filled with material left over the the system’s formation. Tame and orderly became ragged and unkempt, and it was clear that the outer system was a place ripe for discovery.

Pluto was the first TNO to be discovered, all the way back in 1930, but the modern era of trans-Neptunian objects began in 1992 with the discovery of (15760) 1992 QB, and we can now count over 1750 TNOs, as listed by the Minor Planet Center. Bear in mind that we can divide the entire space occupied by TNOs into several prominent divisions: the Kuiper Belt, the Oort Cloud, and the scattered disk, with a few outliers like Sedna causing continuing controversy. 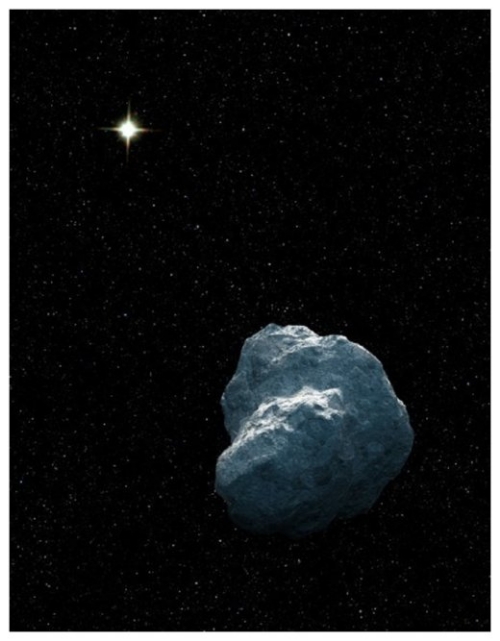 Which gets us to another controversial object, an unusual world its discoverers have named Niku. Probably less than 200 kilometers in diameter, Niku’s outstanding characteristic is that its orbital plane is tilted 110 degrees to the plane of the Solar System. The object is in a retrograde orbit, moving around the Sun in a direction opposite to the rest of the planets. We have one other TNO that fits the retrograde classification: 2008 KV42.

The paper on Niku, produced by Ying-Tung Chen (Academia Sinica, Taipei) and colleagues points out that 2008 KV42 has previously been the subject of dynamical simulations that show its orbit has a lifetime stable for billions of years. The researchers believe the Kuiper Belt is an unlikely origin for such a retrograde object, which may implicate the Oort Cloud, but the orbital dynamics of this population of objects await a good deal of further work.

Discovered as part of the Panoramic Survey Telescope and Rapid Response System 1 Survey (Pan-STARRS 1) in Hawaii, Niku is another indication that something is preserving the orbits of these objects. The team’s simulations — using 1000 clones and moving them forward for a period of one billion years — show stable orbits matching the location of Niku and 2008 KV42, hence indicating the possibility of a large population with similar origins. 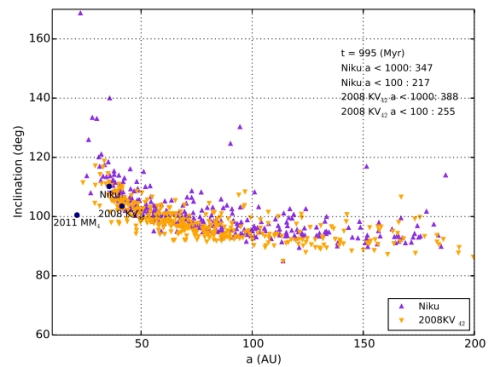 Image: The orbital distribution of survivors from 1000 initial clones of Niku (purple) and 2008 KV42 (orange) after 1 Gyr approximately. The overall clones decay far more slowly than normal Centaurs, with > 30% of the test particles remaining dynamical stability at the end of a 1 Gyr integration. Note that the orbits of Niku and 2008 KV42 are located at the highest density position in this plot. Credit: Chen et al.

What would cause clustering in the orbits of known objects with highly inclined orbits? To make sense of it, the team turned to known high-inclination objects from the Minor Planet Center catalog, selecting them according to criteria drawn loosely from their simulations. We have a small number of samples — the team was working with only six objects. Even so, the probability of getting six objects into a common plane is low enough to argue against coincidence. And because orbital precession should prevent long-term clustering, the authors assume that another mechanism has to explain it. Planet Nine immediately comes to mind, the hypothesized world that may lurk in the Solar System’s outer reaches. Evidence for Planet Nine, after all, comes from a similar group of objects in highly inclined orbits.

But a hypothetical Planet Nine, an undiscovered dwarf planet in the scattered disk, and a distant solar companion all fail when subjected to the team’s analysis. To explain the observed clustering requires some kind of mechanism that remains undiscovered. In the quotation from the paper below, Ω refers to the longitude of the ascending node, one of the orbital elements used to specify key orbital parameters. It is here that the clustering is observed:

…we established through numerical integrations that the putative Planet Nine was unable to explain the orbital confinement. In addition, we also attempted more extreme alternative scenarios, consisting of integrations that include a synthetic high-inclination dwarf planet of a few Earth masses whose orbit crosses the giant planet region. None of these attempts succeeded in anchoring the Ω of the test particles. Moreover, adding a planet into planet-crossing region has a very high chance of disrupting the orbital structure of the Kuiper Belt and remaining outer Solar System.

Niku’s orbit is a mystery — no wonder its name means ‘rebellious’ in Chinese. We could use a lot more data on objects like Niku to help us understand their apparently long-lived orbital plane and the factors that keep it stable. The authors point to projects like the upcoming Large Synoptic Survey Telescope (LSST) survey that will perform a ten-year scan producing a 200 petabyte set of images beginning in 2022. We can hope the LSST survey will uncover whatever object or objects are responsible for sculpting the orbits of these high-inclination TNOs.