Breakthrough Starshot Report 2: Drilling Down to the Basics

A lot of things can go wrong when you’re working on a thirty-year project. Consider the charter of the systems subcommittee of Breakthrough Starshot, whose mission is to “…ensure that Starshot engineering activities can and will result in a 0.2c mission to Alpha Centauri.” In the hands of the capable Kevin Parkin, the subcommittee has oversight over a systems team that will conduct system engineering, modeling and integration activities.

I call Parkin ‘capable’ but, like so many of the people I dealt with at the recent meetings in San Francisco, he strikes me as flat-out brilliant. He’s also a strategic thinker who knows how to communicate. Parkin’s presentation on how to structure a project as complex as Starshot included classic failure modes of past projects, such as team members working with differing assumptions, a focus on details and not on the whole, and a focus on the whole and not on the details. Any one of these can trip you up. Walk a fine line, in other words, and try to avoid duplication of effort through careful information management and sound communications.

As I took notes, I thought of something Greg Benford said in Dining with Dirac, an account of a dinner that included Stephen Hawking and Paul Dirac, not to mention Martin Rees: “This is an evening to keep your mouth shut.” I kept mine shut and applied myself to typing faster.

Pete Klupar would sound some of the same themes that Parkin did as we met at Moffett Field that morning, noting as well that long projects like these can be in danger of ‘loss of memory’ as the original team is gradually replaced over time. And something that came up at various points in the discussion kept haunting me as I prowled the grounds at Moffett during our breaks, trying to get my daily walk in while I put the meetings in perspective. A big project has to avoid getting locked in too early. The basic assumptions have to be looked at before it’s too late to change them. We’ll be talking about that more in coming days. 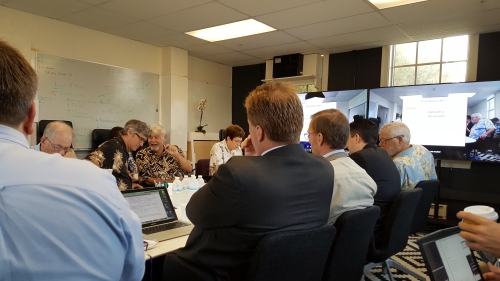 Shadow of the Airship

I tried to see the big picture of Starshot as I walked on a break that first afternoon, enjoying the Bay area’s benign climate. Moffett Field is the home of the famous ‘Hangar One,’ an airship hangar built during the Depression era to house the USS Macon. From Building 18, where we worked, the steel girders of the stripped hanger dominate the view (its exterior panels were removed in 2011). Walking near it is an experience of immensity, with a floor covering eight acres, so large that fog used to form near the ceiling. It was impossible to approach it without thinking of the engineering that went into dirigibles.

The great age of airships ended with the death of the Hindenburg in 1937, though it had been presaged by the loss of the hydrogen-filled British airship R101 in 1930. Moffett Field is itself named after Rear Admiral William Moffett, who died aboard the USS Akron, a helium-filled airship, in 1933. Theories abound as to the loss of the Hindenburg, but it’s understood that inert helium is by far the safer gas. You could call the use of hydrogen a systems engineering choice, but in this case it was one forced on designers by the US embargo on helium to Germany.

The point is, you have to look for any factor that can take a project down, no matter the expediency of one choice over another. What Breakthrough Starshot wants to do is so breathtaking that it’s necessary to stand back and remember its parameters. A plan over three decades to design, simulate and experiment, creating a prototype of a craft that can reach another star, and then actually build such a craft after new infusions of capital demands unique flexibility and what the meeting was there to consider, a careful plan for the early going. 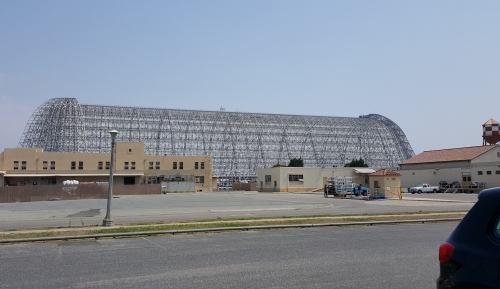 Image: Hangar One at Moffett Field, now a skeletal reminder of the era of enormous airships. Technological change can be abrupt and disruptive, reinforcing the challenging nature of long-range planning. How to make sensible choices in the early going is a huge question.

To Reach a Star

One choice that team members seemed comfortable with is the choice of a sail to reach the target star, presumably in the Alpha Centauri system, although not necessarily Proxima Centauri b. Aboard the sail would be a small payload, perhaps the size of a smartphone, perhaps even smaller, that is built around what the project is calling a StarChip. We’re talking a payload that is measured in grams rather than kilograms, using breakthroughs in miniaturization to fold in communications, navigation, cameras, power supply and LED-like ‘thrusters.’

The early discussions have included a sail of about four meters to the side, itself weighing no more than grams. The sail has advantages that place it far above any other propulsion methods available today. Chemical rockets require far too much propellant to even consider a star mission. Fusion is not available. A sail can be placed under a beam of directed energy that drives it, planners hope, to twenty percent of the speed of light. In the initial Starshot concept, that beam of energy comes from a colossal phased array of lasers, to be built in southern latitudes. The Atacama desert of Chile is often mentioned.

A sail pushed to 20 percent of the speed of light could blow past the Alpha Centauri system after about twenty years of flight time, returning data to Earth if a way can be found to do this, presumably through ‘swarm’ technologies that would leverage the fact that Starshot is not one sail but hundreds, perhaps thousands. Multiplying the number of sails offers the kind of redundancy that allows for projected losses through collisions with dust in the interstellar medium. I listened with fascination to Bruce Draine’s thoughts on the ISM. He is, after all, author of Physics of the Interstellar and Intergalactic Medium (Princeton, 2010). 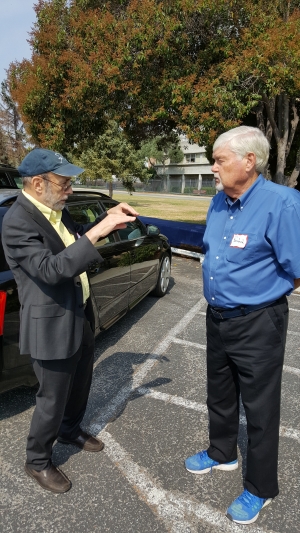 More on that issue later, though the consensus seems to be that sails and payloads can survive the journey, with some losses along the way. As with the entire concept, you can see that there are showstoppers even when we get to the target star. Just how is that data return managed through payloads as tiny as these? Can the beam array also be a receiver? Can the sail itself become an optical element, a receiver as well as a transmitter, on demand?

I’ve gone through the long list of problem areas in these pages before (see Starshot: Concept and Execution). In San Francisco, we also considered the timeline. The systems subcommittee was in place, and separate subcommittees had been formed for both the laser beamer and the sail, with New Mexico Tech’s Robert Fugate in charge ot the former, Jim Benford of the latter. When we weren’t meeting in joint session, I spent my time in the sail committee, wishing I could be in two places at once, but also fascinated by the early plans for simulations and experimental work to follow up what Jim, brother Greg Benford and Chaouki Abdallah had already done on beamed sails some years back. Thanks to them, we already have beamed sail lab data.

I should also mention that the San Francisco meetings followed two days of Breakthrough Listen discussions, focused on the effort Yuri Milner launched with a $100 million donation to the SETI effort. I wasn’t able to attend these, although we did have a report from members of the SETI community on what they had accomplished. I’ll try to get to that some time this week.

But back to that Starshot timeline. After a discussion of systems drivers — measures of performance, as Pete Klupar explained in his presentation, and tools that show how well a system meets its goals — Klupar projected a roadmap showing a research and development phase lasting roughly eight years, to be followed by a period of ‘sub-scale testing’ that presumably involves construction of a prototype. Construction of the beamer system and sail could, in Klupar’s chart, begin in the early 2030s, with a launch perhaps as early as the mid-2040s. Needless to say, these are estimates and by their nature flexible.

People keep asking me how you can think about building a system that will allow interstellar flight for $100 million, the amount Yuri Milner donated to establish the project. The answer is, you can’t, but the $100 million isn’t for the entire mission. What the systems subcommittee reported on was $100 million for technology analysis and development over a span of five years, to be followed by a prototype that would take the cost up to $1 billion. The lowest estimate I’ve seen for an actual mission with these technologies is $10 billion, leaving future funding issues to be decided, although presumably success in the early going could encourage wealthy philanthropists to repeat Milner’s gesture with money of their own.

I’m running out of time this morning, so I’ll end here. Tomorrow what I want to do is get into the issue of early simulation and testing, as seen through the deliberations of the sail committee. On the final day of our meetings, this time meeting in the hotel rather than at Moffett Field, the sail group began writing a draft of what will become its first RFP — Request for Proposal — a solicitation that involves bidding to fulfill the requirements defined by the committee. More on this, and on how it will affect the first sail experiments, tomorrow.