A Closer Look at Proxima b

I have much more to say about the Breakthrough Starshot meetings, but last evening I decided to slow the pace a bit. I mentioned in my first report that the discovery of a planet around Proxima Centauri had woven through our San Francisco meetings, creating a bright thread of discussion that continued through all three days. We are also getting papers on Proxima’s planet that inform us more about its potential habitability. In the next couple of days, then, I want to go through some of these before returning soon to the broader issues of Starshot.

I also have to admit that I am still transcribing some of my handwritten notes from San Francisco to get everything in synch with my laptop, a process that is taking longer than I intended, thanks to my murky handwriting…

In any case, whether Proxima b is habitable or not would surely play a large role in any decisions about using it as Starshot’s initial target. So let’s remember what Guillem Anglada-Escudé and the Pale Red Dot team had to say about the planet’s placement, which they describe as “…squarely in the center of the classical habitable zone for Proxima.” I also want to quote briefly from the reliable Andrew LePage, whose Habitable Planet Reality Check: Proxima Centauri b is a post you’ll want to read. Here LePage sums up what we know so far:

Based on the limited data we currently have about Proxima Centauri b, it seems to be potentially habitable, although not very Earth-like. Its MPsini of 1.27 ME suggests that it is a rocky planet instead of a mini-Neptune with little prospect of being habitable in the conventional sense. It is also located inside the habitable zone (HZ) of its host star and detailed 3D global climate models suggest that it could be habitable over a wide range of realistic conditions. Comparing it to other potentially habitable exoplanets currently known (a short list dominated by planets of other red dwarfs), Proxima Centauri b is probably one of the most promising, on par with Kepler 186f… 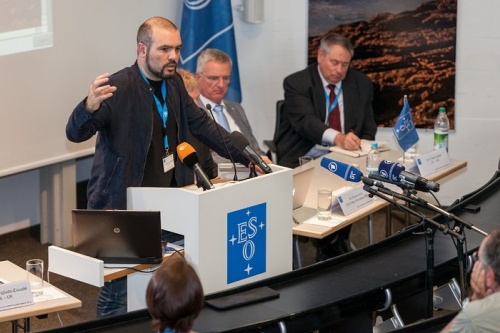 Note the reference to MPsini, which refers to an essential problem with radial velocity studies. We can’t know how a given exoplanet’s orbit is tilted in relation to our view from Earth. The practical result is that the answer we obtain for a planet’s mass is only a minimum. We can see that it is affecting its star, but we have no way of knowing (unless we have a transit) whether we are seeing the system at a steep or shallow angle. So we’re really dealing with a set of possibilities about the actual range of a planet’s mass.

Anglada-Escudé and team calculate a mass for Centauri b of ~1.3 M⊕ (i.e., 1.3 times the mass of the Earth). As to its size, another quote from LePage:

Based on statistical analysis of Kepler results performed by Leslie Rogers (Hubble Fellow at Caltech) and others, it is known that exoplanets seem to transition from being predominantly rocky to predominantly volatile-rich probably at a radius of about 1.5 RE and certainly no greater than 1.6 RE (see “Habitable Planet Reality Check: Terrestrial Planet Size Limits”). A planet with this radius corresponds to a mass of about 6 ME, assuming an Earth-like composition. With an unconstrained orbital inclination, there is about a 98% chance that Proxima Centauri b with a MPsini of 1.27 ME has an actual mass below this threshold.

LePage also looks at a paper I haven’t studied yet from Martin Turbet (Laboratoire de Météorologie Dynamique, Sorbonne Universités) and colleagues which studies climate models for Centauri b. The finding here is that this planet could support liquid water on the surface, making the case that the planet is at least potentially habitable.

JWST: Focusing in on Proxima b

Avi Loeb is chairman of the Breakthrough Starshot Advisory Committee. The Harvard physicist, who led our discussions in San Francisco, has also produced (with Harvard’s Laura Kreideberg) a new paper on Proxima b that advances our discussion. What Loeb and Kreideberg look at is the question of how we can learn more about the atmosphere of this planet, which in turn goes a long way toward illuminating potential habitability. The paper reminds us early on that the amount of stellar radiation reaching the planet is about two-thirds what we receive on Earth. The prospects for habitability really are enticing but we must have a way to confirm them.

The issues here are more serious than they may seem at first glance. We don’t know whether Proxima b even has an atmosphere. Remember that in order to have suitable temperatures for liquid water, this world must orbit very close to its small star, at about ∼0.05 AU. That’s going to make for probable tidal lock, with one side of the planet continuously turned toward Proxima Centauri, the other away from it. It is not inconceivable that an atmosphere can collapse; i.e., we wind up with a world whose atmosphere is largely frozen out on the night side. We also face the possibility that atmospheric erosion from stellar winds can strip the world of its envelope.

We’re going to learn soon, through David Kipping’s work with data from the Canadian MOST satellite, whether a transit can be detected here, but the odds hover around 1 percent. In the absence of a transit, Loeb and Kreideberg look at what they consider the best option for characterizing an atmosphere: Measuring variations in its heat as it orbits Proxima.

The idea is this: A tidally locked planet will expose more or less of its hot dayside to the observer as it orbits the star (as seen from Earth). We should thus get thermal variation, which allows us to compare what we observe with models for a world with various kinds of atmosphere. If the planet has no atmosphere at all, this ‘thermal phase variation’ will be different from what we would see if an atmosphere is present, for an atmosphere would redistribute heat from dayside to nightside, changing the profile of the temperature variation over time.

Image: Figure 2 from the Loeb/Kreideberg paper. Caption reads: Thermal phase curves for a bare rock (left) and a planet with 35% heat redistribution. The models both assume an inclination of 60 degrees and an albedo of 0.1. Credit: Loeb & Kriedeberg.

The James Webb Space Telescope, to be launched in 2018, may be a key component in this work. The paper proceeds to outline the kind of observational test that could confirm the existence of an atmosphere on Proxima b. It is a combination of observing strategies from ground and space that seeks to measure the possible redistribution of heat. From the paper:

In the case of no redistribution, one could infer the planet does not have an atmosphere and is unlikely to host life. By contrast, if we do find evidence for significant energy transport, this would indicate that an atmosphere or ocean are present on the planet to help transport the energy. In that case, Proxima b would be a much more intriguing candidate for habitability. Either way, these observations will provide a major advance in our understanding of terrestrial worlds beyond the Solar System.

Observations with the JWST in the 5 − 12 micron regime, the paper argues, can distinguish between bare rock and a world with 35 percent heat redistribution to the nightside at a high level of confidence. Longer observations can tell us whether an Earth-like atmosphere exists by detecting ozone absorption. Here it’s interesting that we can use an existing space instrument to begin the investigation:

This model assumes an Earth-like atmospheric composition irradiated by a GJ 1214b-like star. We note that the presence of ozone is sensitive to the ultraviolet (UV) spectrum of the host star (Rugheimer et al. 2015), which can vary for M-dwarfs even of the same spectral type (France et al. 2016). UV spectroscopy of Proxima should therefore be a priority while it is still possible with the Hubble Space Telescope.

A combination of our tools, then, can be applied to this task, one that would mark our first cut into the question of possible life around the star nearest our own. More thoughts on Proxima b’s habitability, as seen in a new paper from Rory Barnes (University of Washington) tomorrow.

Today’s paper is Loeb & Kreideberg, “Prospects for Characterizing the Atmosphere of Proxima Centauri b,” submitted to Astrophysical Journal Letters (preprint).

Previous post: Breakthrough Starshot Report 2: Drilling Down to the Basics