Since I’ve just finished reading Stephen Baxter and Alastair Reynolds’ The Medusa Chronicles, a great deal of the action of which takes place beneath the upper clouds of Jupiter, I’m finding the Juno mission more than a little fascinating. The novel shows us a Jupiter that is the habitat of a variety of dirigible-like lifeforms, along with the predators that make their life difficult, and a mysterious world far beneath that I won’t spoil for you by describing.

Juno is delving into mysteries of its own. The spacecraft’s first images of Jupiter’s north pole, taken on August 27, mark the first of 36 close passes that will define the mission. As is so often the case with first-time planetary discovery, we are seeing things we didn’t expect. Scott Bolton (SwRI) is Juno principal investigator:

“First glimpse of Jupiter’s north pole, and it looks like nothing we have seen or imagined before. It’s bluer in color up there than other parts of the planet, and there are a lot of storms. There is no sign of the latitudinal bands or zone and belts that we are used to — this image is hardly recognizable as Jupiter. We’re seeing signs that the clouds have shadows, possibly indicating that the clouds are at a higher altitude than other features.” 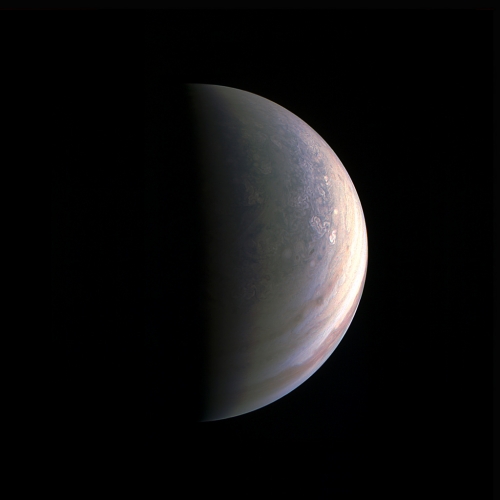 Image: As NASA’s Juno spacecraft closed in on Jupiter for its Aug. 27, 2016 pass, its view grew sharper and fine details in the north polar region became increasingly visible. The JunoCam instrument obtained this view on August 27, about two hours before closest approach, when the spacecraft was 195,000 kilometers away from the giant planet (i.e., from Jupiter’s center). Unlike the equatorial region’s familiar structure of belts and zones, the poles are mottled with rotating storms of various sizes, similar to giant versions of terrestrial hurricanes. Credit: NASA/JPL-Caltech/SwRI/MSSS.

And we also learn that, unlike Saturn, Jupiter has no hexagon at its north pole. If it had been there, Juno would surely have found it, with all eight of its science instruments collecting data during the flyby, including the Italian Space Agency’s Jovian Infrared Auroral Mapper (JIRAM), which acquired infrared imagery at both north and south polar regions. We learn from the first-ever such imagery of these regions that both poles show warm and hot spots. “JIRAM,” says instrument co-investigator Alberto Adriani (Istituto di Astrofisica e Planetologia Spaziali, Rome), “is getting under Jupiter’s skin…”

“These first infrared views of Jupiter’s north and south poles are revealing warm and hot spots that have never been seen before. And while we knew that the first ever infrared views of Jupiter’s south pole could reveal the planet’s southern aurora, we were amazed to see it for the first time. No other instruments, both from Earth or space, have been able to see the southern aurora. Now, with JIRAM, we see that it appears to be very bright and well structured. The high level of detail in the images will tell us more about the aurora’s morphology and dynamics.” 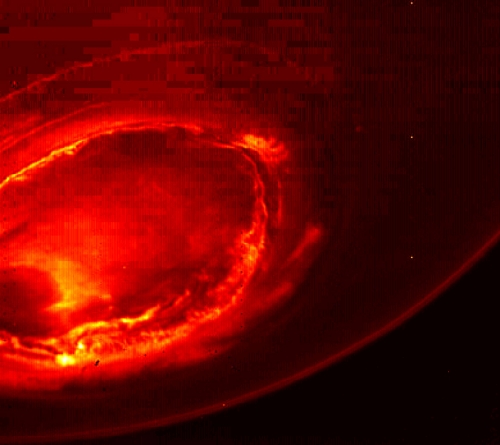 Image: This infrared image gives an unprecedented view of the southern aurora of Jupiter, as captured by NASA’s Juno spacecraft on August 27, 2016. The planet’s southern aurora can hardly be seen from Earth due to our home planet’s position in respect to Jupiter’s south pole. Juno’s unique polar orbit provides the first opportunity to observe this region of the gas-giant planet in detail. Juno’s Jovian Infrared Auroral Mapper (JIRAM) camera acquired the view at wavelengths ranging from 3.3 to 3.6 microns — the wavelengths of light emitted by excited hydrogen ions in the polar regions. The view is a mosaic of three images taken just minutes apart from each other, about four hours after the perijove pass while the spacecraft was moving away from Jupiter. Credit: NASA/JPL-Caltech/SwRI/ASI/INAF/JIRAM.

Jupiter is capable of violent radio outbursts at frequencies below 40 MHz. I can remember as a boy scanning, with an old Lafayette shortwave receiver, somewhere around 20 MHz, hoping to pick up signs of this activity, which seems to correlate usefully with Io’s position in its orbit. I picked up plenty of noise at various places on the dial, but was too inexpert to know which, if any, could have been signs of Jupiter’s radio storms. Fortunately, Juno has a Radio/Plasma Wave Experiment (Waves), which was able to record the emanations from close by.

The radio activity is coming from the kind of energetic particles that create the gas giant’s aurorae. The Waves experiment should give us a lot more understanding of the phenomenon in coming months. JPL has a video on the auroral activity now available on YouTube. I’ll insert it below, but let me know if this insertion is successful. Recently I’ve heard from a small number of readers that the YouTube material doesn’t display (it seems to work for most, however). I’m still trying to figure out what the glitch is, so if you don’t see it, drop me a note in the comments

No sign of Baxter and Reynolds’ medusae, which are actually Arthur C. Clarke’s medusae, enormous living zeppelins that he described in his 1971 novella “A Meeting with Medusa” (the new novel follows the continuing story of the novella’s protagonist). But then, Juno isn’t exactly designed as an astrobiology experiment. Who knows what exotica it may pass by when it de-orbits and eventually burns up in the dense atmosphere during its 37th orbit…