On Planets in Binary Systems

Do we have examples of close binaries in which we find a planet around each star? Until late August, the closest known binary system with planets orbiting both individual stars showed a separation of 1000 AU. But now we have the twin stars HD 133131A and HD 133131B. Around the former we have two planets, one whose minimum mass is about 1.5 times Jupiter’s mass, the other with a minimum of about half Jupiter’s mass. The second star hosts a planet of about 2.5 Jupiter’s mass. These stars aren’t nearly as close as the Alpha Centauri stars, but their separation is still small, about 360 AU.

This is an interesting find, pulled off by a team of Carnegie scientists and scheduled to appear in The Astronomical Journal. The work draws on data from the Planet Finder Spectrograph mounted on instruments at Las Campanas Observatory in Chile. The Carnegie work has focused on large planets in elliptical or long-duration orbits, in an attempt to learn whether Jupiter-sized planets are as comparatively rare as current statistics suggest.

“We are trying to figure out if giant planets like Jupiter often have long and, or eccentric orbits,” said Johanna Teske (Carnegie Observatories). “If this is the case, it would be an important clue to figuring out the process by which our Solar System formed, and might help us understand where habitable planets are likely to be found.” 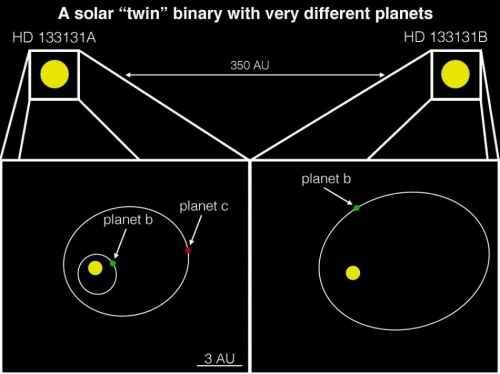 Image: An illustration of this highly unusual system, which features the smallest-separation binary stars that both host planets ever discovered. Only six other metal-poor binary star systems with exoplanets have ever been found. Credit: Timothy Rodigas.

We’re pushing radial velocity methods hard in this work. In fact, the authors note that we have only a dozen or so planets detected with this technique that have periods of 3600 days or more. The outer planets around HD 133131A and B thus become interesting data points as we try to analyze how frequently giant planets in eccentric orbits and long orbital periods appear.

As to the stars themselves, both are believed to be metal-poor and probably in the range of 9.5 billion years old. And that raises questions in itself, as the paper notes, because we’re used to thinking of giant planets forming in a more metal-rich environment. In the segment below, Tc stands for condensation temperatures:

…we find a small but significant depletion of high Tc (> 1000 K) elements in HD 133131A versus B, and explore how this could be related to differences in planet formation, interactions between the planets and the two stars, and/or the composition of the planets orbiting the two stars. This system is the smallest separation “twin” binary system for which such a detailed abundance analysis has been conducted. Overall, HD 133131A and B are especially noteworthy because they are metal-poor but are orbited by multiple giant planets, contradictory to the predicted giant planet-metallicity correlation. The planets detected here will be important benchmarks in studies of host star metallicity, binarity of host stars, and long period giant planet formation.

Understanding the behavior of gas giants will eventually help us piece together our own Solar System’s formation, because we already know that Jupiter and Saturn helped to shape the asteroid belt in the system’s early days, and also were factors in the delivery of volatile materials to the inner rocky worlds. Whether or not our Solar System’s configuration is rare depends largely on the occurrence of giant planets in long-period orbits. Yet recent studies suggest that true Jupiter analogs in similar orbits occur around only one to four percent of host stars.

What we are now learning is that even if Jupiter analogs are rare, there are numerous possibilities among giant planets on highly eccentric orbits, which could have major consequences on the formation of inner rocky worlds. We now try to learn whether long-period gas giants are as unusual as they seem, and whether they are more frequently eccentric, all factors that play into key questions of planetary habitability as infant systems emerge.

The paper is Teske et al., “The Magellan PFS Planet Search Program: Radial Velocity and Stellar Abundance Analyses of the 360 AU, Metal-Poor Binary “Twins” HD 133131A & B,” accepted at The Astronomical Journal (preprint).