Deep space exploration brings a surprise with each new destination. New Horizons made the point over and over again, and today we get word of new work on one of the mission’s discoveries, that dark red polar cap at the north of Pluto’s large moon Charon. Will Grundy (Lowell Observatory) and colleagues are behind the study, which digs into the theory that methane from Pluto’s atmosphere is trapped at Charon’s north pole.

In a new paper in Nature, Grundy and team have used New Horizons mission data in conjunction with their own modeling of the evolution of Charon’s ice cap over the course of a Plutonian year to demonstrate that the model of trapped methane works. It involves the processing of methane into complex organic molecules called tholins. From the paper:

The distribution of dark, reddish material around Charon’s northern pole is notable for its generally symmetric distribution across longitudes and its gradual increase with latitude, although there are local irregularities associated with craters, topographic features and perhaps subsurface variations in thermal properties. These characteristics, and the existence of an albedo feature around the southern pole with a similar latitude dependence, are consistent with our hypothesis that the combination of Pluto’s escaping atmosphere and Charon’s long, cold winters enables CH4 to be seasonally cold-trapped at high latitudes, where some is photolytically processed into heavier molecules that are subsequently converted to reddish tholin-like materials. 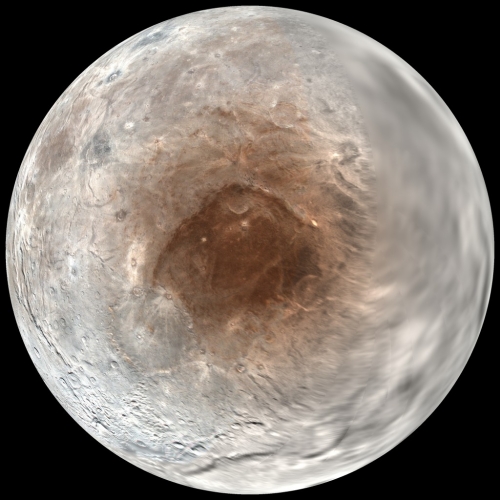 Tholins are complex organic molecules that can be formed when ultraviolet light strikes simple organic molecules like methane. We find the dark red of Charon’s polar cap duplicated on the surface of Pluto in areas where these interactions occur. And as the paper notes, the nearby atmosphere of Pluto provides ‘potential feedstock’ for this complex chemistry at Charon’s pole. Grundy’s team was able to model the surface thermal environment on Charon, capturing the cold-trapping of material from Pluto and its processing into more complex molecules, all consistent with earlier theories but modeled for the first time quantitatively.

New Horizons provided data on the escape rates of methane and nitrogen. The former exists in a frozen state on Charon’s surface only during the polar winter night, which means that it is being processed quickly, although it need not be fully converted into tholins right away, but only into molecules that are non-volatile enough to remain on the surface when the pole is again exposed to sunlight.

As to radiation sources with an impact on Charon’s surface, the paper notes ultraviolet photons, solar wind charged particles, galactic cosmic rays and interstellar pickup ions. The latter result from solar wind protons interacting with neutral hydrogen atoms from the interstellar medium. The paper pegs the most important night-side radiation source as solar ultraviolet photons that have been scattered by the interplanetary medium.

Once the pole is back in sunlight, ultraviolet radiation directly from the Sun can drive further chemistry. Interestingly, we find a reddish spot on the small Plutonian satellite Nix, but the authors argue that it and the other small moons orbit farther from Pluto and have lower masses, which makes the process less efficient. Charon is a different story. With sufficient mass and a winter lasting for over a century, its trapping of Pluto’s methane produces a highly visible result.