Proxima Centauri b, that highly interesting world around the nearest star, is about 0.05 AU out from its primary. The figure leaps out to anyone new to red dwarf stars, because it’s so very close to the star itself, well within the orbit of Mercury in our own system. But these are small, dim stars compared to our Sun, and hugging the star is essential to remain in the habitable zone. That also makes for very short years — Proxima b completes an orbit every 11.2 days.

Guillem Anglada-Escudé and colleagues reminded us in the discovery paper that among the many things we have to ask about this planet is whether or not it has a strong magnetic field. Because Proxima Centauri is known for flare activity, not to mention 400 times the X-ray flux the Earth receives. A magnetic field could help the planet hang on to its atmosphere, but just how strong would it need to be? Like any M-dwarf planet, then, Proxima b seems vulnerable.

This thinking has ramifications much closer to home. We are learning that CMEs have influenced the atmosphere of Mars and may have played a large role in how it evolved. Data from the Mars Atmosphere and Volatile Evolution (MAVEN) spacecraft point in this direction, showing that a CME can compress the Martian magnetosphere, spinning off effects in the ionosphere and below. We are now in the realm of what is being called ‘space weather.’

Think about what happens here on Earth when the Sun throws off one of its enormous storms, a coronal mass ejection, or CME. Outflowing plasma can thoroughly disrupt communications and navigation equipment, with damage to satellites and even power blackouts, all this with our own planet’s magnetic field around us. And although stars like Proxima Centauri are much smaller than ours, it turns out that they are far more active, with CMEs often ten times more powerful. 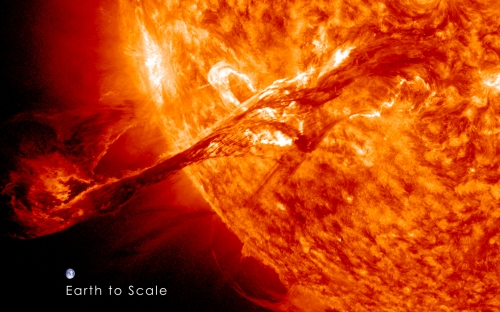 Image: On August 31, 2012 a long filament of solar material that had been hovering in the sun’s atmosphere, the corona, erupted out into space at 4:36 p.m. EDT. The coronal mass ejection, or CME, traveled at over 1450 kilometers per second. The CME did not travel directly toward Earth, but did connect with Earth’s magnetic environment, or magnetosphere, with a glancing blow. causing aurora to appear on the night of Monday, September 3. Credit: NASA GSFC.

Add into the mix the fact that M-dwarfs can maintain high levels of magnetic activity for billions of years. Although Proxima Centauri is thought to be roughly the age of the Sun, about five billion years, it is clearly an active star. All of this is troubling for the prospects for astrobiology.

Now we have new work led by Christina Kay (NASA GSFC and Boston University) that makes an intriguing case. The probability of a habitable zone planet around an M-dwarf being hit by a CME may depend on the plane of the planet’s orbit. The work revolves around modeling of coronal mass ejections from the M-dwarf V374 Peg, allowing Kay and team to assess the effects of CMEs on a planet in the star’s habitable zone. The model is called Forecasting a CME’s Altered Trajectory (ForeCAT), and it predicts how a CME can wind up being deflected.

ForeCAT was used to analyze these interactions both in the case of a planet in the habitable zone of V374 Peg as well as a hot Jupiter orbiting a Sun-like star. The paper describes an intriguing result:

In other words, planetary orbits that line up with the astrospheric current sheet, which is generally aligned with the star’s equator, have a higher probability of being hit by a CME than planets in higher-inclination orbits. All of this has significant potential for affecting habitability:

From our estimation of 50 CMEs per day, we expect habitable mid-type M dwarf exoplanets to be impacted 0.5 to 5 times per day, 2 to 20 times the average at Earth during solar maximum. The frequency of CME impacts may have significant implications for exoplanet habitability if the impacts compress the planetary magnetosphere leading to atmospheric erosion.

At stake here is the minimum planetary magnetic field needed to retain an atmosphere (Kay and team believe a magnetosphere twice the size of the planetary radius is necessary). For mid-type M-dwarfs like V374 Peg, magnetic fields between tens to hundreds of Gauss are required to protect an exoplanet in the habitable zone. This is one to two orders of magnitude more than that of the Earth. The conclusion is stark: “We expect that rocky exoplanets cannot generate sufficient magnetic field to shield their atmosphere from mid-type M dwarf CMEs.”

The good news: The scientists argue that the minimum magnetic field strength will change depending on the M-dwarf’s spectral type, as well as on stellar activity and stellar magnetic field strength changes. Some types of M-dwarf may thus be more likely to retain an atmosphere than dwarfs like V374 Peg. Extending this work in their direction is a compelling next step.