A circumbinary planet is one that orbits two stars, and to date we haven’t found many of them. Word of a new detection comes from an event observed back in 2007 during a microlensing study called OGLE — Optical Gravitational Lensing Experiment. OGLE is a Polish undertaking designed to study dark matter using gravitational microlensing, but while dark matter remains as dark as ever, the project has been able to deliver useful findings on distant exoplanets.

A number of groups specializing in gravitational microlensing also contributed to this analysis. These are observation efforts not as well known to the public as Kepler or Gaia, but they’re doing exceptional work: MOA (Microlensing Observations in Astrophysics); MicroFUN (Microlensing Follow-Up Network); PLANET (Probing Lensing Anomalies NETwork); and Robonet. Subsequent Hubble Telescope data were then applied to the analysis, confirming the discovery. 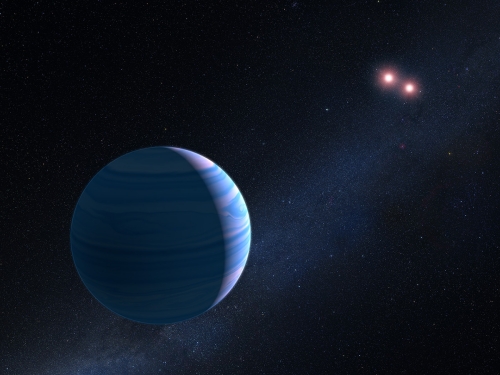 Image: This artist’s illustration shows a gas giant planet circling a pair of red dwarf stars. The Saturn-mass planet orbits roughly 480 million kilometers from the stellar duo. The two red dwarf stars are a mere 11 million kilometers apart. The illustration is based on Hubble Space Telescope observations that helped astronomers confirm the existence of a planet orbiting two stars in the system OGLE-2007-BLG-349, located 8,000 light-years away. Credit: NASA, ESA, and G. Bacon (STScI).

Both radial velocity and transit methods detect planets most readily when they are near to their star. A planet orbiting close in makes multiple transits in a shorter period of time than one further out, which is why the early Kepler detections were of planets like this, with the boundary of detection gradually moving outward with time. Radial velocity, which looks at the Doppler shift of light from the star as it is tugged by the orbiting planet, likewise shows its strongest signal for a close-in, large planet, and that’s why we had so many early detections of ‘hot Jupiters.’

But gravitational microlensing is another thing entirely, capable of finding planets and stars at a wide range of orbital distances around stars that can be many thousands of light years away. The OGLE-2007-BLG-349 event produced a light curve that needed additional data from the Hubble Space Telescope to confirm, allowing astronomers to separate the background source star and the lensing star in the crowded starfield.

What we wind up with is a planet orbiting about 480 million kilometers from its host stars, both of them red dwarfs no more than 11 million kilometers apart. David Bennett (NASA GSFC), lead author on the paper discussing the discovery, describes the process used in the work:

“The ground-based observations suggested two possible scenarios for the three-body system: a Saturn-mass planet orbiting a close binary star pair or a Saturn-mass and an Earth-mass planet orbiting a single star… [T]he model with two stars and one planet is the only one consistent with the Hubble data. We were helped in the analysis by the almost perfect alignment of the foreground binary stars with the background star, which greatly magnified the light and allowed us to see the signal of the two stars.”

Unlike Kepler’s ten discovered circumbinary planets, the two orbiting OGLE-2007-BLG-349 are much further away from their hosts. The paper discusses another two-star plus one planet event that has been interpreted as a planet orbiting one of the two stars (OGLE-2013-BLG-0341), and a second event dominated by a stellar binary signal, adding:

As you might expect, the paper for today has a long list of co-authors. It’s Bennett et al., “The First Circumbinary Planet Found by Microlensing: OGLE-2007-BLG-349L(AB)c,” accepted at The Astronomical Journal and available as a preprint.