An antimatter sail, as described yesterday in the work of Gerald Jackson and Steve Howe, is an exciting idea particularly because it relies on only small amounts of antimatter, tapping its energies to create fission in a uranium-enriched sail. Thus the uranium is the fuel and the antimatter, as Jackson says, is the ‘spark plug.’ We reduce the needed amount of antimatter and define what the new Kickstarter campaign calls “…the first proposed antimatter-based propulsion system that is within the near-term ability of the human race to produce.”

The antimatter sail produces fission by allowing antimatter, stored probably as antihydrogen, to drift across to the sail, and as we saw yesterday, the potential for velocities up to 5 percent of lightspeed mean that such a sail could be deployed on interstellar missions. Proxima Centauri naturally emerges as a target, but Jackson and Howe’s work is not a result of recent interest in that star and its one known planet. The 2002 study in which they describe the antimatter sail was originally created for a probe to 250 AU (a Kuiper Belt and heliopause mission), drawing on work on a 10 kg instrument payload that was done at the Jet Propulsion Laboratory.

The just launched Kickstarter campaign is to re-think that earlier work in the context of an unmanned mission to a nearby solar system. Among the specific campaign goals is to create a detailed design for long-lived antimatter storage, a key issue in any such concept. After all, we have to store the antimatter in such a way that it does not annihilate with the normal matter surrounding it. We’ve known that this can be done for some time. In fact, it was back in 1984 that physicist Hans Dehmelt demonstrated how to hold a single positron in a cylinder using electric and magnetic fields. Dehmelt gave his device the name ‘Penning trap,’ a nod to Frans Penning, a Dutch physicist who saw that a magnetic field could steer electrons into tight orbits.

Dehmelt would go on to be awarded the Nobel Prize in Physics in 1989 for co-developing the Penning trap technique with Wolfgang Pauli (each shared one-half of the prize). By adjusting the voltage and strength of the magnetic field, the Penning trap would become a viable way to store tiny amounts of antimatter.

But as antimatter storage has become feasible, problems grow as we begin storing more and more of the stuff. Try to contain large amounts of positrons or antiprotons and their like charges repel. Thus large quantities of antimatter — and compared to current levels of production, we need large quantities indeed — experience repulsive forces between them that quickly become stronger than the magnetic container can handle. Soon the magnetic ‘bottle’ begins to leak and the antiparticles are destroyed.

What Jackson and Howe have been looking at for their antimatter sail involves storing the antimatter in the form of antihydrogen (a positron orbiting an antiproton). Here we’re at the heart of the original work the duo did for NASA’s Institute for Advanced Concepts, from which the antimatter sail took root. A key goal of the new Kickstarter campaign is to produce a design report describing how to build an antihydrogen storage bottle that can be used aboard a spacecraft. Their extensive experience with the issues makes Jackson and Howe an ideal team to push spacecraft antimatter storage forward.

I’m looking back at the original NIAC report Steve Howe prepared for NASA, which envisions storing antihydrogen in the form of frozen pellets rather than in traps, the idea being to use integrated circuit chips of the kind we have become familiar with through today’s microprocessors. We would deploy the same kind of etching technology to create a series of tunnels on each chip, with wells at periodic intervals where the antihydrogen pellets would be held. Changing the voltage allows pellets to move down these tunnels from well to well.

Remember the concept here: The antimatter, as it emerges from the storage device (held some 12 meters behind the sail) is then accelerated so that it drifts out into contact with the sail. But Jackson and Howe’s thinking is clearly evolving on this matter. The plan discussed on the Kickstarter site is to create an antihydrogen storage bottle based on methods Robert Millikan and Harvey Fletcher used in the early 20th Century to measure the charge of the electron. As this involved observing charged oil droplets between two metal electrodes, its uses may supercede the kind of chip technology originally envisioned. And further research, Jackson says, may actually involve antilithium rather than antihydrogen as the optimum form of antimatter.

A key requirement, of course, is portability — this is a storage method that has to be applicable to spacecraft. At Hbar Technologies’ headquarters, Jackson and Howe have the first portable storage bottle for such uses, one able to store positrons or antiprotons at liquid helium temperatures in a hard vacuum. Jackson’s experience with storage also extends to the design and construction of particle accelerator storage rings. Forcing storage technology forward is the need to house amounts of antimatter too large to store as charged elementary particles. 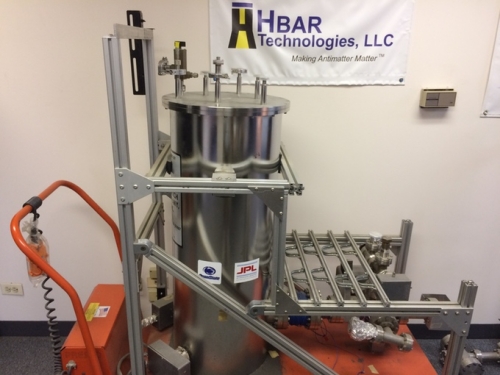 I’ve focused on storage, but it’s clear that a lot of things have to go right to get to an interstellar antimatter sail. Key parameters for the Kickstarter effort are to drill down further on antimatter storage issues while at the same time describing renewed antiproton production possibilities at Fermi National Accelerator Laboratory. The effort will recast the original study by way of firming up or adjusting earlier parameters in sail physics and engineering. The thrust-test apparatus developed through the NIAC grant will be upgraded and test facilities identified; here I would imagine experiments involving uranium-laden foils and antiproton interactions. Jackson and Howe also want to design an antihydrogen experiment to be funded in a later campaign.

To me, the possibility of a renewed and improved antiproton process at Fermilab is quite interesting, as we’ve seen what minute amounts our technologies are currently able to generate. In addition to an investigation like this, I would imagine Jackson and Howe will want to look at James Bickford’s ideas on natural antimatter production within the Solar System (see, for example, Antimatter Acquisition: Harvesting in Space, or search the archives here for more).

Bickford argues that space harvesting of antimatter is five orders of magnitude more cost effective than producing antimatter on Earth, an idea Jackson and Howe may want to contest if the highly restricted antimatter yields at Fermilab can be adjusted and improved. For more, see the Kickstarter page for this effort and keep an eye on Jackson and Howe’s Antimatter Drive site. The page there is not yet populated, but the intent is to archive all previous work on the antimatter sail, including a great deal of continuing studies on these storage concepts.