Witnessing Titan’s ever-changing seasons has been a major payoff of the Cassini mission, whose end is now close enough (September, 2017) to cause us to reflect on its accomplishments. We now see winter settling in firmly in the southern hemisphere, along with a strong vortex now developing over the south pole. When Cassini arrived in 2004, we saw much the same thing, only in the northern hemisphere. Athena Coustenis (Observatoire de Paris) is presenting results on Titan’s climate at the ongoing joint meeting of the American Astronomical Society’s Division for Planetary Sciences and 11th European Planetary Science Congress.

“Cassini’s long mission and frequent visits to Titan have allowed us to observe the pattern of seasonal changes on Titan, in exquisite detail, for the first time,” says Dr. Coustenis. “We arrived at the northern mid-winter and have now had the opportunity to monitor Titan’s atmospheric response through two full seasons. Since the equinox, where both hemispheres received equal heating from the Sun, we have seen rapid changes.”

The overall cycle of heat circulation on Titan is clearly defined. Warm gases rise at the summer pole as cold gases subside at its winter equivalent. The equinox occurred on Titan in 2009, and since then Cassini has observed a reversal of the system. A strong, revolving pattern of circulation, or vortex, has developed in the stratosphere over the south pole, one that is enriched in trace gases that are otherwise rarely found in Titan’s atmosphere. Cassini also revealed an atmospheric hot spot developing at high altitudes within months of the equinox, while its counterpart in the northern hemisphere had greatly diminished two years later. 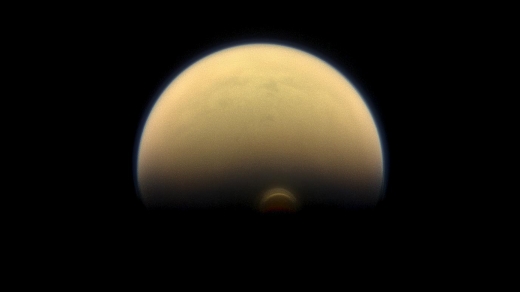 Image: Slipping into shadow, the south polar vortex at Saturn’s moon Titan still stands out against the orange and blue haze layers that are characteristic of Titan’s atmosphere. Images like this, from NASA’s Cassini spacecraft, lead scientists to conclude that the polar vortex clouds form at a much higher altitude — where sunlight can still reach — than the lower-altitude surrounding haze. This view looks towards the trailing hemisphere of Titan (5,150 kilometers across). North on Titan is up and rotated 17 degrees to the left. Images taken using red, green and blue spectral filters were combined to create this natural-color view. The image was taken with the Cassini spacecraft narrow-angle camera on July 30, 2013. Credit: NASA/JPL-Caltech/Space Science Institute.

Within the polar vortex over the south pole, trace gases are accumulating as sunlight diminishes. Here again the parallel is direct. We now see, according to this Europlanet news release, the appearance of complex hydrocarbons and nitriles like methylacetylene and benzene, which were before observed only at high northern latitudes. Coustenis again:

“We’ve had the chance to witness the onset of winter from the beginning and are approaching the peak time for these gas-production processes in the southern hemisphere. We are now looking for new molecules in the atmosphere above Titan’s south polar region that have been predicted by our computer models. Making these detections will help us understand the photochemistry going on.”

While the onset of winter led to a swift temperature drop of 40 degrees Celsius in the stratosphere over the southern pole, the warming effects in the northern hemisphere as the seasons change have been much more gradual, with a 6-degree rise since 2014. In these northerly regions, Cassini has found trace gases that persist into the summer. Although these should eventually disappear, Coustenis says an area of depleted molecular gas and aerosols has emerged across the entire northern hemisphere at an altitude of 400-500 kilometers.

High altitudes on Titan are, in other words, complicated, and while we’re developing a consistent picture thanks to Cassini’s twelve years of observations, these complex effects bear further study. Remember that although we’re entering Cassini’s last year, we have a two-part endgame to go through that involves a final close flyby of Titan to reshape the spacecraft’s orbit. In its new trajectory, Cassini will make 22 passes through the gap between the rings and the planet.

The so-called Grand Finale begins in April of 2017 and takes us to a first dive through the ring/planet gap on April 27. It should be quite a ride, with the closest observations ever made of Saturn, including mapping the planet’s magnetic and gravity fields at high precision, along with samples of particles in the main rings and gases from Saturn’s outer atmosphere. In addition, we should get spectacular views of the rings when, in November of this year, Cassini begins a series of 20 passes just beyond the outer edge of the main rings. Cassini has not gotten this close to the rings since its arrival at Saturn in 2004; we’ll see the ring structure at high resolution. The spacecraft’s final dive into Saturn is planned for September 15, 2017.

“While it will be sad to say goodbye, Cassini’s final act is like getting a whole new mission in its own right,” said Linda Spilker, Cassini project scientist at NASA’s Jet Propulsion Laboratory, Pasadena, California. “The scientific value of the F ring and Grand Finale orbits is so compelling that you could imagine an entire mission to Saturn designed around what we’re about to do.”