Determining the age of a star is not easy, but one way of proceeding with at least some degree of confidence is to identify the star as a member of a stellar association. Here we’re talking about a loose cluster of stars of a common origin. Over time, the stars have begun to separate, but they still move together through space. It was the Armenian astronomer Viktor Ambartsumian, the founder of the Byurakan Observatory, who discovered the nature of these associations and demonstrated that they were composed of relatively young groups of stars.

Stellar associations, or young moving groups (YMGs), provide an outstanding place to study the evolution of protoplanetary disks around young stars, for all associated stars have a similar age. Indeed, their galactic motion can be traced back to their place of origin. Another benefit: Exoplanets in such infant systems are often still hot, well within the capabilities of our near-infrared direct imaging techniques. Many direct imaging and disk evolution surveys in recent years have focused on the members of young moving groups.

Without Ambartsumian’s discovery of these groups, we would be hard pressed to come up with the age of the interesting red dwarf tagged AWI0005x3s. We’ve just learned, through a team led by Steven Silverberg (University of Oklahoma), working with a group of citizen scientists using the Disk Detective site, that this star has a warm circumstellar disk, an interesting find in its own right because we haven’t found many disks around red dwarfs.

But AWI0005x3s is found in the Carina association, on the order of 200 light years away in the Carina nebula, and appears to be moving with it. That pegs the young red dwarf as highly unusual, as Silverberg explains:

“Most disks of this kind fade away in less than 30 million years. This particular red dwarf is a candidate member of the Carina stellar association, which would make it around 45 million years old [like the rest of the stars in that group]. It’s the oldest red dwarf system with a disk we’ve seen in one of these associations.” 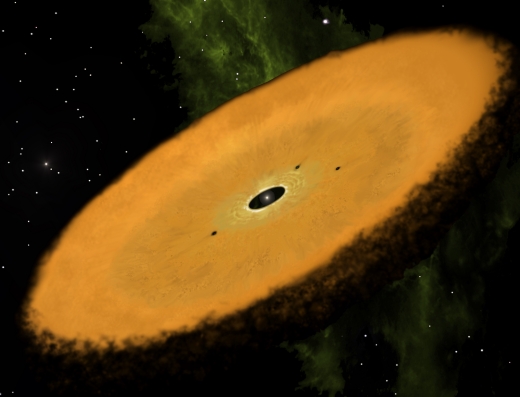 Looking through the paper, I learned that the intriguing AWI0005x3s disk would be the oldest ever observed around an M-dwarf, assuming the star can be confirmed as a member of Carina (the authors argue that the star has a probability of over 90 percent of being part of the association). Astronomers have found a disk frequency of about 6 percent around M-dwarfs less than 40 million years old, dropping to 1.3 percent around older members of this stellar class.

So where does AWI0005x3s fit in? The paper contrasts what we see in M-dwarfs with other types of star:

…debris disks are detected around 32 ± 5% of young A stars with Spitzer/MIPS (Su et al. 2006), and around 1−6% of old (∼ 670 Myr) Sun-like (F5-K9) stars with Spitzer/MIPS (Urban et al. 2012). Survival models predict that M dwarf debris disks occur at a similar frequency as disks around Sun-like stars, and that the dearth of detections to date is either due to systems having blackbody-like dust close to their central star, or due to systems having a smaller amount of dust distributed over a larger orbital separation (Heng & Malik 2013).

But other possibilities are still in play, including accelerated disk dissipation through interactions with a young stellar wind. Its age places AWI0005x3s in a potentially useful place in relation to other M-dwarfs, as the paper makes clear:

Our new M dwarf debris disk would bridge the gap between YMG and field M dwarf disks. Given their common spectral type (both M5.5V), this system could be a young analog for the Proxima Centauri system (Anglada-Escudé et al. 2016), as well.

The authors believe that AWI0005x3s is a potential target for study via adaptive optics on large telescopes and should be within range for high-contrast imaging, which could allow us to resolve the structure of the disk and potentially identify exoplanet candidates.

As for Disk Detective, it’s well worth a look. In fact, some 30,000 people have gotten involved in viewing short videos from surveys like the Wide-field Infrared Survey Explorer mission (WISE) and Two-Micron All Sky Survey (2MASS) projects, with some two million classifications of celestial objects now achieved. Eight of the citizen scientists involved are listed as co-authors on the AWI0005x3s paper, which is now available online.