A Microlensing Opportunity for Centauri A

First light for the European Extremely Large Telescope (E-ELT) is scheduled for 2024, a useful fact given that a few years later, we may be able to use the instrument in a gravitational lensing opportunity involving Alpha Centauri. Specifically, Centauri A is expected to align with the star 2MASS 14392160-6049528, thought to be a red giant or supergiant and far more distant than Alpha Centauri. This will create an event that not just the E-ELT but other instruments, like the GRAVITY instrument on the Very Large Telescope Interferometer (VLTI), will be able to study — GRAVITY is capable of extremely high accuracy astrometry.

A team of French astronomers led by Pierre Kervella (CNRS/Universidad de Chile) is behind this new study, which involved fine-tuning our knowledge of the trajectories of Centauri A and B. Remember that we see gravitational lensing when a massive object like a star distorts the spacetime around it, so that light from the more distant object must follow a curved path to reach us. The amount of mass in the closer star affects the extent of this deflection, and when one or more planets orbit the star, they become theoretically detectable. 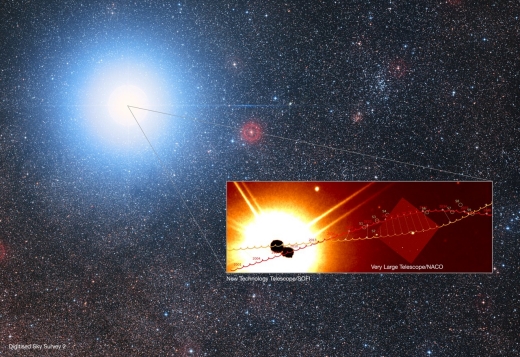 Image: The predicted trajectory of Alpha Centauri A and B. Credit: ESO.

The Centauri A event is to occur in 2028, by which time we may well have knowledge of other planets around one or more of the primary Alpha Centauri stars. But a particularly useful aspect of microlensing is that it is not reliant on proximity to the star. Unlike transit studies or radial velocity analysis, which can produce evidence for a close-in planet quickly but require lengthy study for planets further out in the system, microlensing allows us to spot planets in wider orbits, even if the observation in which we find them is transitory and does not repeat.

So this lensing event is another potential window into this intriguing system, around which at present we know only of the world orbiting Proxima Centauri. Recall that the latter has also been studied in two microlensing events, one in October of 2014, the second in February of 2016. We found Proxima b through radial velocity methods (although the star was also the subject of transit studies), but microlensing is useful even when it fails to turn up planets, since it gives us a way of refining our estimates of a given star’s mass.

Alpha Centauri gives us serious opportunities for microlensing because the star field behind it is densely populated, thanks to the system’s location near the plane of the galaxy as seen from Earth. The Kervella paper studies conjunctions with background stars that will occur in coming decades, based on observations of the field surrounding Alpha Centauri that Kervella and co-author Fréderic Thévenin (Observatoire de la Côte d’Azur) began over a decade ago. 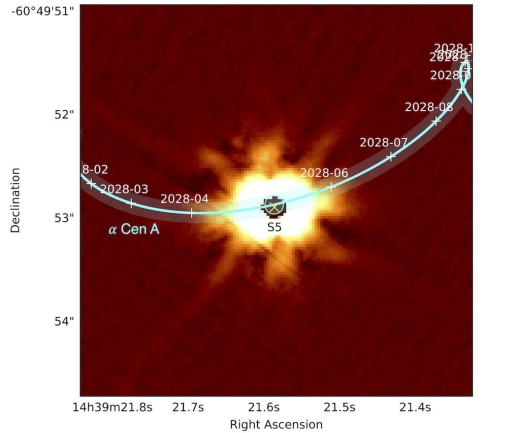 Image: An enlargement of the conjunction that will occurs in 2028, with the Einstein ring of Alpha Cen A represented in cyan color. Credit: Pierre Kervella.

During the approaches, astrometric measurements will reveal the relativistic deflection of the background star light with a high signal to noise ratio. For the conjunction with S5, we may be able to directly observe the gravitational splitting of the distant source image using the E-ELT, VLTI/GRAVITY or ALMA. The astrometric monitoring of the relative positions of α Cen and the S stars may reveal the presence of planets through secondary gravitational lensing. In addition, the light from the background star will possibly be subject to photometric variations induced by transits of low mass objects present in the α Cen system.

Potential results include, in other words, everything from high and low mass planets to asteroids and comets. The authors believe the conjunctions in coming decades will give us highly accurate information about the Alpha Centauri stars’ proper motion, orbital parameters and parallax values. And note this: “This accuracy will be valuable for high-precision modeling of the two stars of α Cen, and for the preparation of the recently announced Breakthrough Starshot initiative to send ultra-fast light-driven nanocrafts to α Centauri.”

The Kervella paper is “Close stellar conjunctions of α Centauri A and B until 2050,” Astronomy & Astrophysics 594 (2016), A107 (abstract). On microlensing and Proxima Centauri, see Sahu et al., “Microlensing Events by Proxima Centauri in 2014 and 2016: Opportunities for Mass Determination and Possible Planet Detection,” Astrophysical Journal Volume 782, Issue 2 (2014). Abstract available.