Just how do gas giant planets form? A team of researchers at ETH Zürich, working with both the University of Zürich and the University of Bern, has developed the most fine-grained and instructive computer simulations yet to help us understand the process. Using the Piz Daint supercomputer at the Swiss National Supercomputing Centre (CSCS) in Lugano, ETH Zürich postdoc Judit Szulágyi and Lucio Mayer (University of Zürich) can now show clear and observable differences between the two formation processes under study by theorists.

The core accretion model begins with a massive solid core that is large enough to pull in gas from the protoplanetary disk and maintain it. The gravitational instability theory, on the other hand, presumes a massive enough disk around the young host star that spiral arms form in the disk in which gravitational collapse can occur around material that has begun to clump there. The simulations demonstrate that with either formation mechanism, a circumplanetary disk forms around the young gas giant planet out of which satellite systems can emerge. 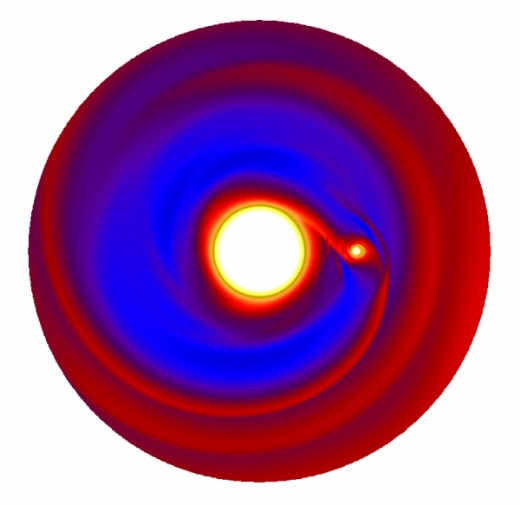 Image: Core accretion: A 10 Jupiter-mass planet is formed and is placed at 50 AU from the star. The planet has opened a gap in the circumstellar disk. (Image: J. Szulagyi, JUPITER code).

The supercomputer simulations take us into new territory in modeling these processes, demonstrating a major difference between the two formation mechanisms: temperature. Create a gas giant with disk instability and you wind up with gas near the planet remaining in the 50 Kelvin range, much colder that what emerges in core accretion, where the disk around the emerging planet is heated to hundreds of Kelvins. The simulations, according to Mayer, used tens of millions of resolution elements, marking the first time the formation of a circumplanetary disk has been simulated around protoplanets at this level of detail.

Here we have effects that are observable, allowing astronomers to examine newly forming planetary systems to measure the temperatures that will indicate which formation process built the planet they observe. From the paper:

…our finding is that the temperature differs by more than an order of magnitude between the GI [gravitational instability] and CA [core accretion] formed CPDs [circumplanetary disks]. According to the simulations, the bulk subdisk temperature is < 100 K in the case of disk instability, and over 800 K for all the CA computations presented in this paper. The reason for this discrepancy lies in the different gravitational potential wells and opacities. Because the protoplanet is a few AU wide extended clump in the GI simulations, while it is a fully formed giant planet with a radius of 0.17 AU (meaning the gravitational potential smoothing length) in the CA-1 simulation, the accreted gas has significantly more energy to release into heat in the latter case than in the former.

Direct imaging of young gas giants can be deceptive, because as the second of two papers on this work points out, a shock front developing in the circumplanetary disk can be luminous and extended, masking the luminosity of the protoplanet itself as it forms beneath the disk. The shock front is created as accreted gas from the outside falls into the gap between the disk’s upper layers and the surface of the disk and the polar regions of the protoplanet.

“When we see a luminous spot inside a circumplanetary disk, we cannot be sure whether we see the planet luminosity, or also the surrounding disk luminosity,” says Szulágyi. This can cause us to estimate a planet’s mass as being up to four times higher than it actually is.

But the variation in temperature between core accretion and gravitational instability models makes it clear that what is happening in these circumplanetary disks can help us distinguish between the formation mechanisms of the planets in question. Measuring temperatures near the planet will allow astronomers to tell which formation process built the planet.

No differences in circumplanetary disk mass were found between the two formation scenarios, a finding that contradicted earlier theoretical models. Even so, although the supercomputer simulations were intensive, the researchers point out that simulations of disk instability do not cover a long enough timescale. Future simulations will have to extend that range while also looking at ionization and the effects of magnetic fields, not accounted for in this work.