The ring system of Uranus was the second to be discovered in our Solar System. You would assume this came about because of Voyager, but the discovery was actually made in 1977 through ground-based observations involving occultations of distant stars. The rings of Uranus are narrow — between 1 and 100 kilometers in width — and many are eccentric. The fact that they are composed of dark particles makes detection and study particularly difficult. 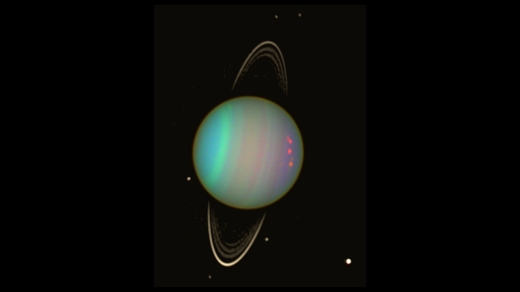 Image: Uranus is seen in this false-color view from NASA’s Hubble Space Telescope from August 2003. The brightness of the planet’s faint rings and dark moons has been enhanced for visibility. Credit: NASA/Erich Karkoschka (Univ. Arizona).

Voyager 2’s flyby of the planet in January of 1986 gave us useful information about the rings’ structure, with three occultation experiments performed during the flyby. We learned that the moons Cordelia and Ophelia were helping to shape the eccentricity of some of the rings (deviations of tens to hundreds of kilometers in some cases). The two moons, in other words, were acting as ‘shepherd’ satellites for three of the planet’s nine rings (ε, δ and γ).

In a new paper, Rob Chancia (University of Idaho), working with colleague Matt Hedman, revisits the Voyager cache to tease out further patterns in the ring data. In particular, the amount of material on the edge of the Uranian α ring, one of the planet’s brightest, varies periodically, a pattern that also turns up in the neighboring β ring. “When you look at this pattern in different places around the ring, the wavelength is different — that points to something changing as you go around the ring. There’s something breaking the symmetry,” says Hedman, recognizing a pattern not dissimilar from similar structures around Saturn.

Narrow rings are themselves signs of some kind of perturbation. The authors argue that a ringlet left unperturbed will spread out radially because of particle collisions, on timescales as small as several thousand years, assuming rings the size of the Uranian α and β rings. A small moon that confines the edges of the ring should produce structures in the form of wavy edges and wakes, and indeed, variations like these clued scientists to the position of Saturn’s moon Pan in Voyager 2 images. 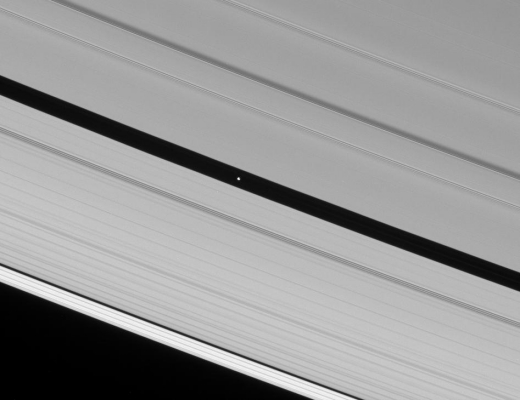 Image: Shepherding Saturn’s rings. The Cassini spacecraft spies Pan speeding through the Encke Gap, its own private path around Saturn. Illumination is from the lower left here, revealing about half of Pan (26 kilometers across) in sunlight. Credit: NASA.

The Voyager data Chancia and Hedman use in this paper were produced by experiments with the spacecraft’s Radio Science Subsystem (RSS), which transmitted at microwave wavelengths (in the X band at 3.6 cm and in the S band at 13 cm) through the rings to ground stations on Earth. Other Voyager data through two other instruments were also acquired but lacked the precision to examine the rings for the presence of perturbing moonlets.

If the same phenomenon we see in Saturn’s rings is happening at Uranus, the Voyager data aren’t sensitive enough to show the culprits, but Chancia and Hedman think that similar moonlets, between 4 and 14 kilometers in diameter, could be keeping the Uranian rings narrow.

Our attempts to visually detect the moonlets are not exhaustive, but given the small predicted sizes of the α and β moonlets, a convincing detection may not be possible in the Voyager 2 images. Future earth-based observations may be more likely to detect these moons. Regardless of the current lack of visual detection, the identification of these periodic structures in the outer regions of the α and β rings is evidence of interactions with nearby perturbers.

How the rings of Uranus stay this narrow is a problem that has vexed scientists since 1977, but we may be teasing out the solution in data that are not a great deal younger. If Voyager 2 continues to pay off in terms of new planetary insights (not to mention both Voyagers’ continuing push into the outer Solar System), it’s a reminder that missions like New Horizons are likely to be producing discoveries for many years now that the data download is complete. I’m also reminded of how much new data we’ll acquire from Cassini when it makes its first ‘dive’ through the planet/ring gap on April 27 of next year. Thanks to Cassini, this is one ring system we can see up close, illuminating the systems around the other outer worlds.

The paper is Chancia and Hedman, “Are there moonlets near Uranus’ alpha and beta rings?” accepted for publication in the Astrophysical Journal (preprint).

Next post: Untangling the Effects of the ‘Big Whack’