Untangling the Effects of the ‘Big Whack’

Seasonal change on our planet is relatively moderate because the Earth has a small axial tilt. Just how that situation arose makes for interesting speculation, and a series of scientific papers that have been augmented by a new analysis in Nature from Matija Ćuk (SETI Institute) and Sarah Stewart (UC-Davis). Working with colleagues at Harvard and the University of Maryland, the scientists have created computer simulations showing that the early Earth experienced a day as short as two hours, and had a highly tilted spin axis.

How we get from there to here is the question, and it’s one that Ćuk and company answer by examining the collision that spawned Earth’s Moon. The impact theory sees the Moon forming from the debris of the collision between an infant Earth and a Mars-sized protoplanet.

It was Ćuk and Stewart who suggested some four years ago that following the ‘Big Whack,’ the Earth’s rotation period was closer to two hours than the five that earlier work had suggested. The Moon would have formed much closer to the Earth than it is today, with the Earth losing much of its spin and a good deal of its tilt as the Moon’s orbit widened. 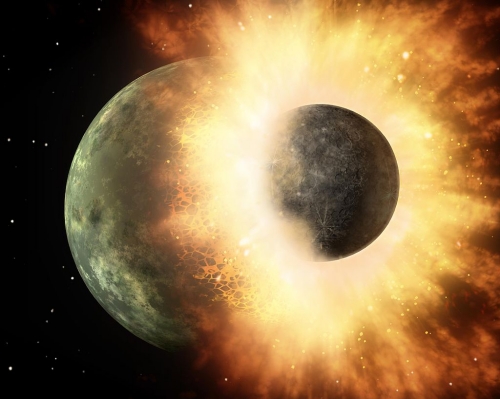 Image: Artist’s depiction of a collision between two planetary bodies. Such an impact between the Earth and a Mars-sized object likely formed the Moon. Credit: NASA/JPL-Caltech.

All this fits with what we see today, with the Moon continuing to move gradually away from the Earth as our planet’s spin continues to slow. The slowdown is produced by the tides the Moon raises on our surface, which dissipate energy continually as they interact with the oceans.

If we assume a fast spinning early Earth, the ejection of material following the impact can produce a Moon similar in composition to Earth’s mantle, which is what we see in lunar rocks. Now we get into the realm of orbital interactions that determine the system’s evolution. For today’s Moon has a tilt of its own, about five degrees off from Earth’s orbital plane. This is true despite the likelihood that internal friction due to tidal effects by the Earth should have had a profound effect on the Moon’s tilt, decreasing it over a billion-year time frame.

The tilt of the Moon’s orbit, in other words, must have once been much greater than it is today. Ćuk, Stewart and colleagues Douglas Hamilton (University of Maryland) and Simon Lock (Harvard) believe we can arrive at today’s situation if we begin with an Earth that, not long after the impact, was spinning essentially on its side, with the Moon orbiting the equator. With an axial tilt of over 70 degrees, this situation will not last, with solar gravitational forces creating an eccentricity in the Moon’s orbit that produces strong tidal flexing within it.

It would only be as the Earth’s rotation continued to slow that the Moon could break out of this deadlock and continue moving away from our planet. Its subsequent torque on the Earth’s spin axis is what Ćuk and team believe began to move the Earth’s axial tilt into more moderate territory. And tidal flexing inside the Moon would have helped to shrink its orbital inclination, so that today it is within five degrees of the orbital plane of the planets.

The paper summarizes the situation, with interesting exoplanet implications. Note the reference in the passage below to the ‘Cassini state,’ which is a system that obeys the laws of the Moon’s motion with respect to the Earth that were originally stated by the Italian astronomer Giovanni Domenico Cassini (for whom our Saturn orbiter is named):

Our high-obliquity model is at present the only model we are aware of to explain the origin of large past lunar inclination, which was subsequently reduced by strong obliquity tides at the Cassini state transition… [O]ur results support high-AM [angular momentum] giant-impact scenarios for lunar origin. An initially high-obliquity Earth is consistent with the expectation of random spin-axis orientations for terrestrial planets after giant impacts, and the dynamics discussed here naturally reduces Earth’s obliquity to values that are low to moderate.

Which is interesting indeed, because here we have a mechanism that can gradually bring a high obliquity exoplanet to a much lower axial tilt, thereby making moderate seasons possible. Is a large moon critical for planetary habitability? Ćuk comments on the same point:

“This work shows that there are multiple ways a planet could get a small axial tilt, making moderate seasons possible. We thought Earth was this way because of the direction of the giant impact 4.5 billion years ago, but it looks like Earth achieved this state later through a complex interaction with the Moon and the Sun. I wonder how many habitable Earth-like extrasolar planets also have a large Moon.”

Centauri Dreams’ take: Interacting gravitational influences within the Solar System have a great deal to do with habitability, as the work of the Serbian astronomer Milutin Milanković has demonstrated. Milanković (working while a prisoner of war during World War I) found rhythmical climate cycles that deep sea core analysis confirmed in the 1970s, all related to gravitational nudges involving the motions of Jupiter, Saturn and the Moon.

David Grinspoon writes about Milanković in his fine new book Earth in Human Hands (2016), pointing out that while our Moon has kept Earth’s rotational axis stable at a 23.5 degrees tilt from the Sun, Mars (currently at about 25 degrees of tilt) varies from 15 to 35 degrees and sometimes more over a period of 120,000 years. Rhythmical climate torques also show up on Titan. Clearly such interactions will have to be taken into account as we examine young systems around other stars and their likely evolution.

The paper is Ćuk, “Tidal evolution of the Moon from a high-obliquity, high-angular-momentum Earth,” published online by Nature 31 October 2016 (abstract).

Next post: Ring Formation: Clues from the Late Heavy Bombardment