Let’s circle back this morning to ring systems, which were the subject of Monday’s post. In particular, I was interested in new work on the rings of Uranus, for Voyager data, newly analyzed, has revealed patterns that indicate the presence of small ‘shepherding’ moons. We’ve seen the same phenomenon at Saturn, but what similarities exist between the two ring systems also highlight their differences. The rings of Uranus — and this holds for Neptune as well — are much darker than the rings of Saturn, which are mostly made up of icy particles.

Darker rings, so the thinking goes, are a likely indication of higher rock content. But why are these ring systems so different, and what produced them in the first place? We have another new paper on the outer systems’ rings to throw into the mix from Ryuki Hyodo (Kobe University), working with co-authors at the Université Paris Diderot and Tokyo Institute of Technology. The team developed computer simulations to construct a plausible model for ring formation that takes us back 4 billion years to the era of the Late Heavy Bombardment (LHB). 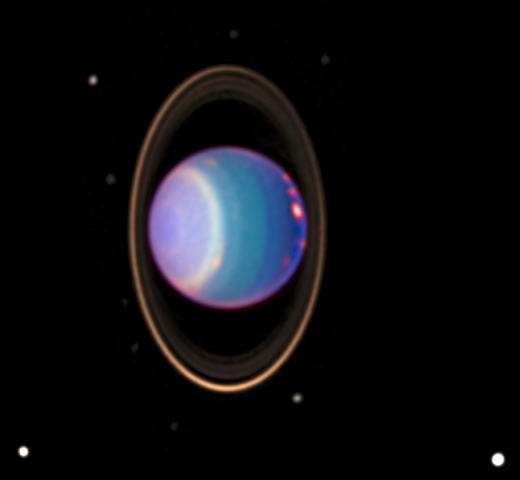 Image: A Hubble Space Telescope view reveals Uranus surrounded by its four major rings and by 10 of its 17 known satellites. This false-color image was generated by Erich Karkoschka using data taken on August 8, 1998, with Hubble’s Near Infrared Camera and Multi-Object Spectrometer.

The LHB was a time when numerous objects collided with planets in the inner system, and the Nice model, developed to explain the sudden spike in impactors, postulates that the giant planets were undergoing orbital migration at this time. That would disrupt scattered objects in the Kuiper Belt and the main asteroid belt, driving them into the inner system. It’s an attractive theory for Hyodo and team because their work calculates the probability of large objects from the Kuiper Belt passing close enough to the giant planets to be destroyed by tidal forces.

You can see where this is heading. It turns out that Saturn, Uranus and Neptune all would have had encounters with numerous objects large and small during any phase of planetary migration. Encounters with Pluto-sized objects, according to the paper, would have ranged from just a few up to several tens of encounters within each planet’s Roche limit during the Late Heavy Bombardment. The Roche limit describes the closest distance from the center of a planet that a small body can approach before being pulled apart by gravitational forces.

Image: What happens when an object gets too close to the Roche limit. This is comet Shoemaker Levy 9, seen here after fragmentation by Jupiter in 1992. The comet would go on to impact Jupiter in 1994. Credit: NASA/HST.

The team’s computer simulations then probed the question of what would happen to kilometer-sized fragments from these passing objects, the kind produced by tidal disruption. The scientists used supercomputers at the National Astronomical Observatory of Japan to show that such captured fragments would undergo repeated, high-speed collisions that would pulverize them over time, grinding them down into centimeter to meter sized particles of the sort currently seen in Saturn’s rings. In the process, their orbits would be circularized. The authors believe enough combined mass exists to explain the formation of ring systems.

Image: Schematic illustration of the ring formation process. The dotted lines show the distance at which the giant planets’ gravity is strong enough that tidal disruption occurs. (a) When Kuiper Belt objects have close encounters with giant planets, they are destroyed by the giant planets’ tidal forces. (b) As a result of tidal disruption some fragments are captured into orbits around the planet. (c) Repeated collisions between the fragments cause the captured fragments to break down, their orbit becomes gradually more circular, and the current rings are formed (partial alteration of figure from Hyodo, Charnoz, Ohtsuki, Genda 2016, Icarus).

The simulations offer a mechanism to explain why the rings of Saturn, Neptune and Uranus appear to have a different composition. The answer has much to do with the higher density of Uranus and Neptune compared to a much lower density Saturn. The case of Uranus explains how density factors into the formation scenario:

…due to its higher density, the width between [Uranus’] surface and its Roche limit is larger than in the case of Saturn. Thus, a body can pass deeper [into the] potential field of the planet. As a result, the tidal destruction could be significant enough to disrupt not only the body’s icy mantle but also its silicate core, and thus silicate components can be more efficiently captured than in the case of Saturn. This would also be applicable to Neptune since it is also denser than Saturn. Therefore, this could explain the fact that the rings of Uranus and that of Neptune are darker than that of Saturn.

In other words, a Kuiper Belt object with a rocky core and an icy mantle can be completely disrupted by a close pass of either Uranus or Neptune because of their higher density, with the rocky core destroyed and captured into what will become the ring structure. Objects approaching Saturn are likely to shed their icy mantle, but not necessarily their rocky core — the core in this scenario might go on to collide with the planet itself.

Hyodo’s model produces initially massive rings around all the giant planets, with the paper commenting that the diversity of rings seen today is clearly the result of subsequent evolution. The authors speculate only briefly on later ring evolution, leaving the matter to future work.

Next post: Unusual Planets in a Close Binary System

Previous post: Untangling the Effects of the ‘Big Whack’