The three Alpha Centauri stars get more and more interesting as we begin to discover planets around them, and the hope of finding planets in the habitable zone around Centauri A or B continues to drive research. Alpha Centauri could be thought of as a close binary with a distant companion, since we’re still not absolutely sure whether Proxima Centauri is gravitationally bound to the system. Learning more about binary systems, in any case, is interesting in itself but also may open windows into our nearest stellar neighbors.

Thus the discovery of planets in the binary system HD 87646 draws my attention. Here we have a primary star, HD 87646A, about 12 percent more massive than the Sun that is some 22 AU away from another star, HD 87646B, the latter about 10 percent less massive than the Sun. Translated into local terms, that would be something like having another star at about the distance Uranus is in our Solar system. 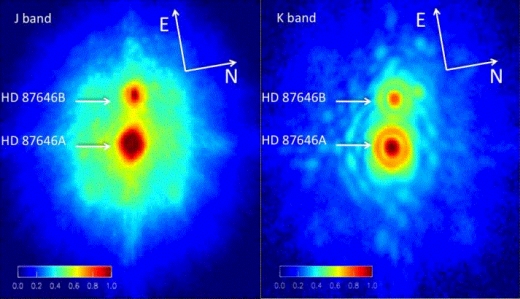 Compared to the Alpha Centauri system, the numbers are close. Centauri A and B orbit a common center of mass, separated by an average distance of 23.7 AU. But this is a highly elliptical orbit, with the average encompassing a swing between 36 AU and a close 11.4 AU, the latter not much farther than Saturn in our system. Proxima Centauri’s separation is wide, some 15000 AU plus or minus 700. If it is indeed bound to Centauri A and B, its orbital period is on the order of half a million years.

We learn in new work from Jian Ge (University of Florida) and postdoc Bo Ma that the HD 87646 binary contains planets, and unusual ones at that. MARVELS-7b (the name stands for Multi-object APO Radial Velocity Exoplanet Large-area Survey, a part of the Sloan Digital Sky Survey-III program) is 12 times the mass of Jupiter. A second world, MARVELS-7c, is 57 times Jupiter’s mass. We’re right on the edge here between giant planet and brown dwarf. Both these massive objects orbit the primary star at 0.1 and 1.5 AU respectively.

These are worlds that would have had to accumulate far more dust and gas than the kind of circumstellar disks we’re familiar with can offer, an indication that they must have formed through a different mechanism. The systems’ stability also raises questions about the formation process. One possibility considered in the paper is that the two planets formed as stars with their hosts, the result of the fragmentation of a large molecular cloud into four pieces. But the authors doubt that fragmentation on such a small scale can occur.

But if the paper casts doubt on the fragmentation model above, it also doubts the core accretion model, in which the gradual buildup of a planetary core pulls in gas from the circumstellar disk. In the HD 87646 system, forming two massive objects through core accretion would require a disk more massive than is usually found in close binaries.

That leaves disk instability as the formation model. Here gas in a high mass disk collapses quickly to form gas giant planets or, in this case, a possible brown dwarf. While core accretion models demand million year timeframes, disk instability can produce a planet within a few thousand years, assuming a circumstellar disk could cool quickly enough to create a bound object that continues to condense. The method can help us understand how massive planets could form at large distances from their star. But can it help us in a close binary situation?

The process is problematic for HD 87646:

Considering the primordial disk mass should be a lot more massive than the planet and brown dwarf mass, the disk is likely to be gravitationally unstable throughout the disk. This is consistent with gravitational instability leading to planet formation. Although several advantages exist for the disk instability model, we consider that such an explanation for the formation of the HD 87646 system should be taken with caution because whether disk instability can be triggered in the present of a close stellar companion remains an issue under debate…

Exactly so, and we also need to learn how the giant planet MARVELS-7b moved into its current low eccentricity orbit. The authors make the case that the planet formed in the disk and migrated inward to its current position, while the brown dwarf (MARVELS-7c) moved because of gravitational interactions in the system to a higher eccentricity orbit. The complexity of the interaction between other objects in the system and the smaller of the two binary stars leads the authors to call for future Gaia observations to constrain these orbits.

We’re left with disk instability as the best formation candidate, while conceding that HD 87646 still has secrets we need to unravel. On a broader front, it’s interesting to note that this work marks the eleventh detection of substellar companions in a binary system with separations of about 20 AU. We have no such detection for Centauri A or B and have to remove the putative world Centauri Bb from this list, but the remaining systems are all going to help us make sense of what we see in our stellar neighbors. HD 87646 is the first multiple planet system detected in binaries as close as this, but we can assume we’ll soon be adding to the catalog.