Our knowledge of protoplanetary disks around young stars is deepening. This morning we have news of three recently examined disks, each with features of interest because we know so little about how such disks evolve. What we do know is that planets are spawned from the gas and dust we find within them, as we see in the disk below discovered using the SPHERE instrument on the European Southern Observatory’s Very Large Telescope in Chile. 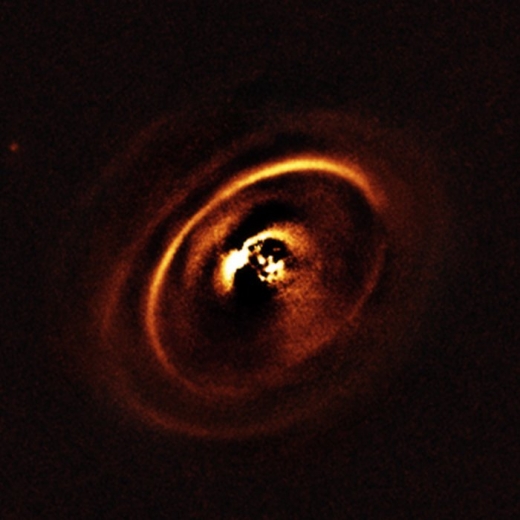 Image: A team of astronomers observed the planetary disc surrounding the star RX J1615, which lies in the constellation of Scorpius, 600 light-years from Earth. The observations show a complex system of concentric rings surrounding the young star, forming a shape resembling a titanic version of the rings that encircle Saturn. Such an intricate sculpting of rings in a protoplanetary disc has only been imaged a handful of times before. Credit: ESO, J. de Boer et al.

The comparison with Saturn is not amiss, for this is a complex system of concentric rings that is uncommon among protoplanetary disks we’ve found so far. While dating such systems is difficult, astronomers believe this disk is a bit less than 2 million years old. Bear in mind that we’re still trying to work out the mechanisms that cause these sculpted effects. They’re surely the result of planets in formation, but it’s worth noting that while the disk around RX J1615 is strikingly regular, we’re just as likely to encounter gaps, voids and spiral arms in such disks.

The work here is from Jos de Boer (Leiden Observatory), who has put the SPHERE instrument to good use. SPHERE (Spectro-Polarimetric High-contrast Exoplanet REsearch) was built as a planet imager, one that would take direct images of exoplanets rather than detecting them through their star’s Doppler shifts or through transits of the planet. An advanced coronagraph, SPHERE blocks out the central star, using a polarimetric differential imaging mode that draws on the fact that the light of the star is unpolarized, while the light scattered by the disk is polarized, allowing sharp images of the disk to be extracted.

Another researcher from Leiden University, Christian Ginski, is behind work on a different young system. The star is HD 97048, about 500 light years from Earth. Here again we see a striking symmetry in the ring system. Four gaps and rings can be found here. But finding any planets that are sculpting this system is not going to be easy, as the paper on this work notes:

We find that nascent planets are one possible explanation for the structures that we are observing. However, given the low planet masses needed to carve out the gaps that we detected, it is unlikely that the planet’s thermal radiation is directly detectable by current generation planet search instruments such as SPHERE or GPI [Gemini Planet Imager]. This conclusion is strengthened by the fact that the gaps are most likely not completely devoid of material and thus any thermal radiation from a planet inside the gap would be attenuated by the remaining dust. 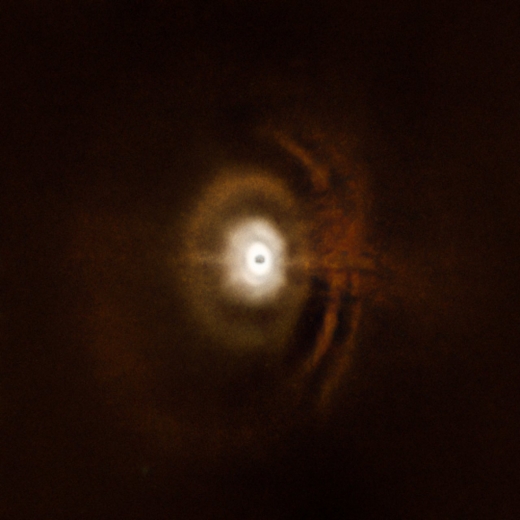 Image: The planetary disc surrounding the star HD 97048 in the constellation of Chameleon, about 500 light-years from Earth. The juvenile disc is formed into concentric rings. This symmetry is in contrast to most protoplanetary systems which contain asymmetrical spiral arms, voids and vortexes. The displayed image is a composite derived from two independent observations that targeted the inner and outer regions of this disc. The central part of the image appears dark because SPHERE blocks out the light from the brilliant central star to reveal the much fainter structures surrounding it. Credit: ESO, C. Ginski et al.

Contrast the two disks above with what Tomas Stolker and colleagues (Anton Pannekoek Institute for Astronomy, the Netherlands) have found. In the image below, we’re looking at HD 135344B, some 450 light years from Earth. Here the disk is obviously asymmetrical, consisting of a central cavity and two spiral arms thought to be the result of planet formation.

And in this system we have a feature that changed noticeably in the months between observing periods. The feature in question is one of the dark streaks that are evidently shadows created by material in motion within the protoplanetary disk. Planetary evolution in real time? That’s what this ESO news release calls it, an indication of the level of detail we can pick out in the inner disk regions of some stars with the SPHERE instrument.

The paper puts the matter this way:

The variable or transient nature of this shadow could be explained by several scenarios, including a local perturbation of the inner disk or an accretion funnel flow from the inner disk onto the star. 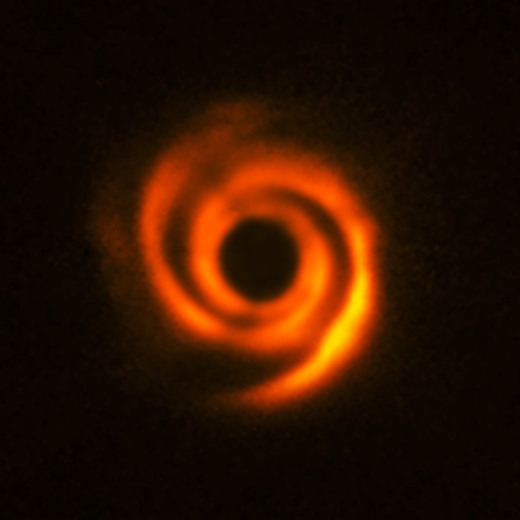 In any case, we’re seeing change within months in this evolving system. And as to the spiral arms themselves:

An explanation for the spiral arms could not be uniquely determined. In the context of linear perturbation theory, the spiral arms are best explained by two protoplanets orbiting exterior of the spiral arms. Protoplanet solutions inside the scattered light cavity seem unlikely because the spiral arm pitch angles would require unphysical disk temperatures.

Understanding how planets shape the disks from which they form is a step forward in planet formation theory, and it’s clear that the environment of young systems like these is complex and varied enough to produce a wide range of outcomes in the evolving disk.