Your Choice of Starships

Think fast. You’ve only got a day or so to work on this. You’ve been asked to come up with a plausible way of getting a fictional crew from one star to another, but laser sails and fusion rockets won’t do. The target might be thousands of light years away, so you have to be thinking faster-than-light. Maybe Miguel Alcubierre comes to mind, or perhaps a wormhole, but a nod in either direction isn’t enough. You’re being asked for a high level of detail, and you’d better have some serious equations available to show you’re not just blowing smoke.

As you might guess, the question relates to the Denis Villeneuve film Arrival, which Paramount released in the U.S. last Friday following its premiere at the Venice Film Festival. No spoilers here, just an entertaining tale. For the person who was asked to dream up fast interstellar transport was Stephen Wolfram, whose public relations people had received a request from the filmmakers to upgrade the science in the film, which was based on a 1998 short story by the brilliant Ted Chiang, a Nebula Award winning short story writer. 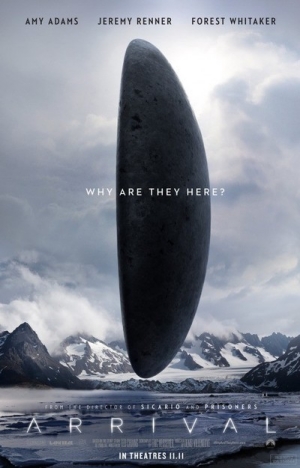 As to Wolfram, he heads up Wolfram Research and is the chief designer of both technical computing engine Mathematica and the Wolfram Alpha online presence. In what I might jokingly refer to as his ‘spare time’ he is the author of the recent A New Kind of Science, written during breaks from his work on knowledge-based programming, the latter being an expansion of Mathematica into what is now called the Wolfram Language.

Wolfram, in other words, is a formidable source when it comes to ideas pushing out to the edges of what we know. Intrigued by the challenge of Arrival, Wolfram and son Christopher traveled to Montreal to meet with the film crew. Soon both men were involved with analysis and computations as they turned questions from the director into Wolfram Language code and visualizations. But time was short, and the biggest challenge was coming up with a theory of interstellar space flight in the course of a single evening.

I don’t know if Wolfram is a movie buff or not, but I’d imagine that working this closely with actors and writers and everyone else on the site is enough to make him one. In any case, he’s keen to avoid giving away anything about the film — for that you have to see it — so you can go to his essay Quick, How Might the Alien Spacecraft Work? without concern that it will deflect your enjoyment of a film that is beginning to get a pretty solid buzz (I suspect our resident movie critic Larry Klaes is going to turn up with an essay about this movie, too).

What we get here is only an introduction into the material Wolfram supplied the filmmakers, but it’s intriguing in its own right. It draws from his own speculations about fundamental physics and the lowest level structure of space itself, the idea being that it is, in his words, ‘a network of nodes, where all that’s defined is connectivity.’ Thus space as we perceive it emerges as a large-scale feature even though it’s made up of discrete nodes. He likens this to water, which is made up of discrete molecules but ‘emerges’ as oceans and rivers.

This calls for a form of matter that is not made from standard elementary particles, but as Wolfram says, “might be like a giant crystal formed directly from connections that make up space.” Thus the skin of the imagined ship is a dynamic metamaterial, and it is this boundary layer material that creates the needed interaction with the outside universe. And yes, it’s unobtainium, but remember, we’re in a fictional universe studying alien technologies.

We can’t go any further without going into the movie itself, but what comes across in Wolfram’s lively essay is the author’s sheer enjoyment at creating a self-consistent theory that could be referenced in the script. Numerous ideas for science fiction dialogue ensued, most of them not necessary in the actual film, but enlivening in their own right:

Here are a few of the ones that (probably for the better) didn’t make it into the final script. “The whole ship goes through space like one giant quantum particle.” “The aliens must directly manipulate the spacetime network at the Planck scale.” “There’s spacetime turbulence around the skin of the ship.” “It’s like the skin of the ship has an infinite number of types of atoms, not just the 115 elements we know” (that was going to be related to shining a monochromatic laser at the ship and seeing it come back looking like a rainbow). It’s fun for an “actual scientist” like me to come up with stuff like this. It’s kind of liberating. Especially since every one of these science fiction-y pieces of dialogue can lead one into a long, serious, physics discussion.

Wolfram says he got involved in Arrival because Hollywood films all too often don’t get the science input they need, a fact he attributes to directors being more attuned to human conflict and character development than the ‘science texture’ of their movies. But of course we have seen some films with an active science advisor, like Kip Thorne in the recent Interstellar, who conjured up its black hole effects with Mathematica. And (I hadn’t known this), Marvin Minsky worked on artificial intelligence issues for 2001: A Space Odyssey, while mathematician Manjul Bhargava spent years helping to bring The Man Who Knew Infinity to the screen, with careful attention to the math. Agreed, that one isn’t exactly science fiction, being a study of Indian mathematician Srinivasa Ramanujan.

Even so, science fiction in Hollywood hasn’t been known for its history of verisimilitude. Wolfram again:

When I watch science fiction movies I have to say I quite often cringe, thinking, “someone’s spent $100 million on this movie — and yet they’ve made some gratuitous science mistake that could have been fixed in an instant if they’d just asked the right person.” So I decided that even though it was a very busy time for me, I should get involved in what’s now called Arrival and personally try to give it the best science I could.

There’s a lot more than starship talk in Wolfram’s essay, especially on establishing communications with an alien intelligence (Wolfram starts with cellular automata), the similarities between software design and movie production, and the possible uses of gravitational waves (massive, spinning non-spherical objects produce them). I keep thinking that with people like Stephen Wolfram involved, the science standards in our films are bound to be on the uptrend presaged by Kip Thorne’s presence in Interstellar.

That could lead to some interesting choices of scripts as we tap the vast store of written science fiction, all too little exploited, for film plots with a genuinely scientific underpinning. Countless short stories and novels form a rich tradition growing out of the science fiction magazines and emerging in the late 20th Century as a vibrant literature in its own right. It’s time Hollywood embarked upon a much deeper acquaintance with this material.