We’ve been looking at the idea of an ocean beneath Pluto’s icy surface for some time, including interesting work on the thermal evolution of the dwarf planet’s ice shell from Guillaume Robuchon and Francis Nimmo (University of California at Santa Cruz). Back in 2011, The Case for Pluto’s Ocean looked at their view that the stretching of Pluto’s surface would have clear implications for an ocean kept warm by radioactive decay in the interior. Now Nimmo is back with a post-New Horizons analysis that also points to an ocean.

The key here is Sputnik Planitia, forming part of the heart-shaped feature that was so distinctive during the flyby — think of Sputnik Planitia as the heart’s ‘left ventricle.’ The impact basin here is aligned almost exactly opposite from Charon. We learn in Nimmo’s paper in Nature that there is only a 5 percent chance that the feature’s alignment with Pluto’s tidal axis is by coincidence. To Nimmo and colleagues, the alignment is a dead giveaway that extra mass in the location is indicated. This would cause tidal interactions between Pluto and Charon that oriented Sputnik Planitia opposite the Charon side. 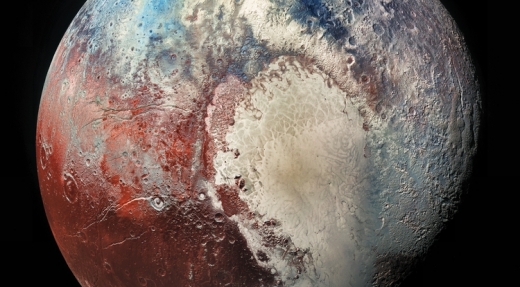 Thus we’re looking at forces that led to a re-alignment of the two small worlds, and enough mass to make that kind of shift possible. A deep basin doesn’t provide the heft, but an ocean could explain the result. In this way of thinking, Sputnik Planitia is the result of a major impact, which would have been followed by an infusion of water pushing up from below. The ice shell at the top hardens, leaving a deep basin gradually filling with nitrogen ice. Both the nitrogen ice and the water from below are necessary to explain the mass needed.

“It’s a big, elliptical hole in the ground,” says Nimmo, “so the extra weight must be hiding somewhere beneath the surface. And an ocean is a natural way to get that.”

Researchers also believe that the frozen nitrogen ice in the Sputnik Planitia basin may be convecting thanks to a weak spot at the bottom which would let heat rise from the interior. That would be an indication of a thin crust in this area, which would have allowed material from below to push upward to create, along with the nitrogen ice, the extra mass observed.

“Pluto is small enough that it’s just about almost cooled off but still has a little heat, and it’s about 2 percent the heat budget of the Earth, in terms of how much energy is coming out,” says New Horizons co-investigator Richard Binzel (MIT), a co-author of the Nimmo paper. “So we calculated Pluto’s size with its interior heat flow, and found that underneath Sputnik Planitia, at those temperatures and pressures, you could have a zone of water-ice that could be at least viscous. It’s not a liquid, flowing ocean, but maybe slushy. And we found this explanation was the only way to put the puzzle together that seems to make any sense.”

Nimmo believes the subsurface ocean is mostly water mixing with ammonia. This natural ‘anti-freeze’ slows the refreezing of the ocean, but as it continues to freeze, the ocean stresses the icy shell enough to cause the fractures we see in New Horizons imagery. We have images from the flyby that appear to be nitrogen glaciers flowing out of mountainous terrain around Sputnik Planitia, adding credence to the idea that the impact basin filled with nitrogen that froze out in the higher elevations and gradually migrated downward.

Looking into nitrogen flows on Pluto for this post, I came across a separate study, submitted to Icarus and led by Orkan Umurhan (NASA Ames), that supports the movement of this material near Sputnik Planitia. Note this:

We find that the wavy transverse dark features found along the northern shoreline of Sputnik Planum may be a transitory imprint of shallow topography just beneath the ice surface suggesting the possibility that a major shoreward flow event happened relatively recently within the last few hundred years. Model results also support the interpretation that the prominent darkened features resembling flow lobes observed along the eastern shoreline of the Sputnik Planum basin may be a result of wet nitrogen glacial ice flowing into the basin from the pitted highlands of eastern Tombaugh Regio.

Image: Tip o’ the heart: This animation shows how Pluto reoriented in response to volatile ices filling Sputnik Planitia (the left lobe of Pluto’s “heart”). Sputnik Planitia started northwest of its present position, and as it filled with ices, the tides from Charon (Pluto’s largest moon) caused the entire dwarf planet to reorient. If Sputnik Planitia is still accumulating ice, then Pluto may still be reorienting. Credit: James Keane/NASA/JHUAPL/SWRI).

The same issue of Nature that features the Nimmo work also includes a paper by James Keane and Isamu Matsuyama (University of Arizona), who back the re-orientation idea. In their view, a pileup of frozen nitrogen is what caused Pluto’s ‘polar wander,’ re-orienting it to place extra mass close to the equator. Keane believes Sputnik Planitia continues to accumulate nitrogen as frozen gases sublimate and re-condense on the other side of the dwarf planet, causing seasonal ‘snowfall’ there.

To understand this pattern, remember that Pluto spins on its side, so that the planet’s poles get the most sunlight during the course of a year, while the equatorial region stays permanently cold. Frozen polar gases that sublimate as they warm up during the Plutonian year can play a major role not just in the world’s weather but also in its orientation:

“Each time Pluto goes around the Sun, a bit of nitrogen accumulates in the heart,” Keane said. “And once enough ice has piled up, maybe a hundred meters thick, it starts to overwhelm the planet’s shape, which dictates the planet’s orientation. And if you have an excess of mass in one spot on the planet, it wants to go to the equator. Eventually, over millions of years, it will drag the whole planet over.”

The duo’s computer models, moving Sputnik Planitia and observing the effect on Pluto’s spin axis, bear this out. Thus while Nimmo and team see a subsurface ocean as necessary to explain the position of Sputnik Planitia, Keane and Matsuyama argue for re-orientation keyed to the cycling of volatiles, an adjustment of Pluto’s position that grows out of its weather. Even so, both teams agree that tectonic faults on Pluto are clues to the existence of an ocean.