Nearby Super-Earth at GJ 536

The discovery of a super-Earth of about 5 Earth masses orbiting the star GJ 536 is a helpful addition to our catalog of nearby red dwarf planets. About 33 light years out, GJ 536b orbits its primary at a distance of 0.06661 AU, an 8.7 day orbit that is too close to be in the habitable zone. But its very proximity to the star implies the possibility of a transit, which could pay big dividends in spectroscopic studies of its atmosphere. Follow-ups as soon as next year should tell us whether it does in fact transit.

The work comes out of the Geneva Observatory, working with researchers in France and Portugal, and involves data from the HARPS (High Accuracy Radial velocity Planet Searcher) spectrograph on the European Southern Observatory’s 3.6 meter telescope at La Silla (Chile). And it has me thinking about the problems and benefits of red dwarf studies. For one thing, astronomers can use nearby M-dwarfs for exoplanet detection because the low mass of the star offers up a robust radial velocity signal — RV was the method used in this detection.

But as the paper on this work notes, M-dwarfs also produce plentiful activity on the surface, which can not only introduce noise into the signal but can actually mimic a planetary signature. Tread carefully in this region, in other words, and be wary of false positives. Thus the research team, headed up by Alejandro Suárez Mascareño (Instituto de Astrofísica de Canarias), also reports a second significant radial velocity signal at 43.8 days which can be readily ruled out:

The second radial-velocity signal of period 43.8 d and semi amplitude of 1.6 ms−1 is a magnetic activity induced signal related to the rotation of the star. We also found a magnetic cycle shorter than 3 yr which would place this star among those with the shortest reported magnetic cycles.

As with our own Sun, whose magnetic cycle runs to 11 years, we’re looking at stellar activity that can alter the star’s radiation, produce starspots and perhaps produce flares. 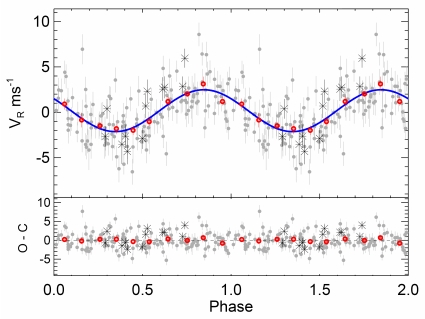 Image: Radial velocity signal of a planet. This is Fig. 10 from the GJ 536b paper, captioned “Phase folded curve of the radial velocity using the 8.7 d period. Grey dots are the raw radial-velocity measurements after subtracting the mean value and the 43.9 d signal. Credit: Mascareño et al. (citation below).

Let’s back out to a broader picture for a moment. Although the Kepler instrument as well as numerous radial velocity and transit studies by ground-based telescopes have given us a priceless catalog of planets, we’re still talking about no more than about a hundred confirmed planets around M-dwarfs. Of these, only a subset consists of rocky planets. We do see systems with Neptune-mass planets and super-Earths, not to mention a few planets near Earth mass, the most spectacular being the world around Proxima Centauri.

We don’t have nearly as much hard data about the frequency of rocky planets around M-dwarfs as we would like, which is why I pay so much attention to such discoveries. We’d like to learn more about the probabilities, particularly in light of work like that of Ravi Kopparapu, who reported in these pages back in 2014 about his own estimate. The Penn State scientist recalculated work by Harvard’s Courtney Dressing and David Charbonneau and came up with what he calls a ‘conservative’ estimate that 48 percent of M-dwarfs should have Earth-size planets in the habitable zone. In other words, an impressive 1 out of every 2.

Given that 75 to 80 percent of the stars in the galaxy are M-dwarfs, this opens up vast numbers of possibly habitable worlds. You can refresh your memory on Kopparapu’s work in How Common Are Potential Habitable Worlds in Our Galaxy, which also discusses the probabilities of habitable planets around G-class stars like our Sun (Kopparapu discusses estimates of about 1 in 5 but believes they are too low). In any case, we need to do with small rocky worlds around nearby stars what we did with the Kepler field stars; i.e. we need to pull in enough data to build up a significant statistical sample. Upcoming missions like TESS (Transiting Exoplanet Survey Satellite) are vital, while the James Webb Space Telescope should be able to analyze the kinds of gases present in the atmospheres of planets around M-dwarfs.

Back to GJ 536b: The authors calculate that for a planet to be in the habitable zone of GJ 536, it would have to orbit in no less than 20 days. At 8.7 days, GJ 536b is too close to the star for habitable conditions to exist. But note this:

The stability of its rotation signals and the low amplitude of the radial-velocity signals with a magnetic origin makes this star a good candidate to search for longer period planets of moderate mass. A rough estimate of the detection limits tells us there is still room for Earth-like planets (∼ 1 M⊕) at orbits smaller than 10, super-Earths (< 10 M⊕) at orbits going from 10 to 400 days, and even for a Neptune mass planet (< 20 M⊕) at periods longer than ∼3 yr.

So the hunt for planets around GJ 536 is clearly not over. We can expect the action to heat up for red dwarf planets in the solar neighborhood as we get new assets into space and continue developing the next generation of ground-based telescopes. If planets in the habitable zones around these stars are as plentiful as some scientists think, we’ll count on spectroscopic analysis of many an atmosphere to give us clues about the possibility of life.

The paper is Mascareño et al., “A super-Earth orbiting the nearby M-dwarf GJ 536,” accepted at Astronomy & Astrophysics (preprint).