The Starship in our Future

The relentless expansion implicit in the Kardashev scale ranks civilizations according to their use of power, with the notion that there is an upward movement from exploiting the energy resources of a planet to the entire home star and then on to the galaxy (Type III). Hence the interest in trying to observe civilizations that operate on such colossal scales. Surely a Kardashev Type III culture would, in its manipulation of such titanic energies, cast a signature that would be observable even by a relatively lowly Type .7 civilization like ours.

So far we see no signs of Type III civilizations, though early searches through our astronomical data continue (see G-HAT: Searching For Kardashev Type III, for example, which gets into the Glimpsing Heat from Alien Technologies work at Penn State). In Earth in Human Hands, David Grinspoon relates the question to our own survival challenges as we deal with the so-called Anthropocene, a time when our technologies are increasingly affecting our planet, creating a new set of challenges to survival.

Humans may have a history that implies expansion as long as resources hold out, but would alien societies necessarily parallel our own? If civilizations do not expand exponentially, perhaps because such models prove unsustainable, then the average technological culture may be on a much slower track, focusing on improving conditions a bit closer to home. That creates a set of SETI observables that we looked at yesterday, still engineering on scales beyond what we can manage ourselves, but well below Kardashev Type III.

The Inevitability of Space

Talk like this sometimes conjures images of planets where societies have turned sharply inward, moving away from exploration and adopting a low-tech way of life. But there are reasons to believe this would not be the case. In its own way, Grinspoon’s book is an example of this. The author is an astrobiologist who focuses on planetary atmospheres, their interactions with the surface, their evolution and contribution to habitability. His book includes planetary-scale projects that future humans may choose to deploy to keep the Earth healthy as we reduce atmospheric pollution and work for sustainable environments.

You can see that studies like this demand a space program as well as an advanced astronomy. If we want to understand the various paths of planetary evolution, we have to go to the planets themselves, gathering data on why Venus has turned out to be the hellish place it is, and why Mars has proven unable to sustain habitable conditions. We also have to study exoplanets with many of the same issues in mind, learning how stellar systems form around distant stars and witnessing the variety of outcomes in systems much different from our own.

Sheer curiosity drives at least our species to planetary exploration even as we learn how best to manage our own planet, and it seems reasonable that alien civilizations would do the same. Moreover, we have the imperative of protecting our world from catastrophes and mass extinctions, so vividly illustrated in our geological past. I’ve argued for a long time that the need to operate far from Earth is essential if we are to have the capability of changing dangerous asteroid or comet trajectories. These technologies are planetary insurance policies that emerge in tandem with our interest in how other worlds have followed their own evolutionary paths. Space is part and parcel of keeping a technological society healthy. 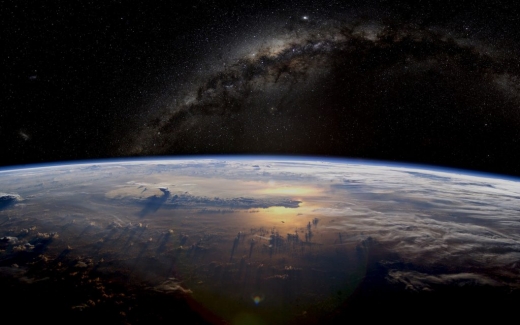 Image: Putting our technologies to work sustaining a planet cannot be done without a robust space program that delivers the lessons of planetary evolution and provides opportunities for deeper exploration.

And can we reach the stars? We can go back to Tsiolkovsky to find the origins of the so-called ‘generation ship,’ that staple of science fiction that presents an intriguing alternative to the all but instantaneous travel so many SF scenarios invoke. Traveling at a small percentage of lightspeed, the generation ship breaks no physical laws and sacrifices travel time for its own kind of sustainability, a functioning culture aboard a vessel in constant passage to the stars. Destinations are finally reached, but I’m persuaded that we may eventually see such ships become their own solution to habitability, an alternative to any kind of planetary surface.

Grinspoon finds the generation ship a useful analogy. For in many older SF tales (think Heinlein’s Orphans of the Sky for one), the knowledge of the ‘world’ as a ship on a voyage has been lost and must be recovered. Suddenly the passengers must be introduced to the idea that there is an entire universe outside the ship. The challenge now is to figure out where the ship is, how far along in its journey, and what to do with it upon arrival. Can we relate this to the early Anthropocene and the need to overcome its challenges? Grinspoon does it this way:

We are hurtling through space on the only place we know we could live, and we’ve discovered that it is indeed, in part, a kind of construct. We are piecing together its history, coming to understand our situation, and realizing that we have inherited a role for which we are not trained. Our current world, inhabited by seven billion, soon to be ten billion people, was created, in part, by the actions of our predecessors and will require smart engineering to return to a safe course. Our immediate task is to switch to auxiliary power and turn off the carbon generators that are overheating the ship. Our longer-term challenge is to shore up our world for the generations who inherit it.

But the generation ship is also a technological outcome in its own right. Here we can think about human migrations in the distant past, out of Africa, across the Bering Strait, into the deep Pacific by outrigger, and so on. Each such migration committed future generations to outcomes they could not choose, just as decisions we make today about our technologies will produce a civilization we hand off to descendants who have no voice in the matter. Like Grinspoon, I think that the nature of our species includes the will, the need, to explore, which is why we will eventually build such craft even as we develop faster technologies.

We are also pushing our space technologies to the limit as we start talking about true interstellar probes, sail-driven craft that will reach their targets within decades, the kind of project envisioned by Breakthrough Starshot. This drive to explore distant targets is not slowing down now that we have surveyed the planets in our own Solar System. Instead, we are trying to get data unavailable to our largest telescopes to expand our understanding of planets around the closest stars, each of which may offer lessons in planetary management.

No, space is woven into the very fabric of a culture coming to grips with the effects of its technologies on its own planet. Thus I think we can expect that even if a culture is not necessarily climbing the Kardashev scale as relentlessly as we might expect, it will still be exploring on its own timeframes the planets and stars closest to it. Who knows what protocols of contact might keep such a culture from making itself known to those it encounters? And who knows what kind of philosophies of time and space may be spawned by all this?

For when we start talking about leaving a home world, we confront the immensity not just of distance but of time. Grinspoon is eloquent on the matter:

Going interstellar means going long. We cannot imagine ourselves as interstellar actors without also conceiving of ourselves as intergenerational actors. We cannot reach the stars without a sense of identity and goals that span generations. This is true for interstellar communication as well as for travel. Neither makes sense unless we see ourselves as collaborating with our descendants. To travel, or even send messages, to the stars, we will have to start conversations, projects, and journeys for our descendants to finish. This cements the essential bonds between generations. We won’t be the first to attempt such projects. The builders of pyramids and cathedrals mostly never lived to see them completed. Sometimes they worked under duress or coercion, but sometimes they were moved by spiritual commitment to something beyond their individual lives. I think of science itself as such an effort, with individual researchers fashioning bricks in an edifice each of us can see only partly constructed, knowing that our students and theirs will continue to build.

The sense of commitment and sacrifice toward outcomes bigger than ourselves often feels missing in our day, but these are human traits that continually re-surface in our history. We keep hammering on these issues because their relevance persists, and the fog of short-term thinking occasionally lifts to offer a view of landscapes and stars so expansive as to take the breath away. Handing off ideas to our posterity is the best life-shaping goal I know. Our messages must reach across generations and we must see that they get there intact.