Tight Constraints on Orbit of a Transiting ‘Super-Earth’

The super-Earth K2-3d orbits a red dwarf star in the constellation Leo, some 150 light years from Earth. The outermost of three planets discovered in the system, K2-3d was found in the K2 phase of the Kepler mission (K2 Second Light), following the issues with the spacecraft’s reaction wheels that led to the end of the primary mission. Interestingly, while the planet is large (with a radius 1.5 times that of Earth), its density is high and indicative of a solid surface (we can measure the radius of K2-3d by studying the transit light curve, while radial velocity methods yield the planet’s mass, allowing astronomers to calculate its density).

Given the right atmospheric parameters, liquid water could exist here, although most models show a tidally locked world receiving too much solar flux (1.4 times that of the Earth) to make habitable conditions likely. With an orbital period of 45 days, K2-3d’s transits are interesting because the planet is close enough to be a useful candidate for follow-up study with next generation telescopes. Transmission spectroscopy will allow us to study its atmosphere as starlight filters through it during a transit, opening up the possibility of searching for potential biosignatures.

But transits have to be observed to make such studies, and that means we must refine the transit ephemeris, which gives us needed parameters about when the planet will cross the face of its star as seen from Earth. The problem here is that we originally had only two transits to work with because the K2 mission surveys each area of the sky for a limited period of time. But an additional two transits were added soon after the planet’s discovery using data from the Spitzer Space Telescope, yielding a total of four measurements.

Now a team from the National Astronomical Observatory of Japan (NAOJ) and the University of Tokyo has used the MuSCAT (Multi-color Simultaneous Camera for studying Atmospheres of Transiting planets) instrument on the Okayama Astrophysical Observatory’s 188-cm telescope to produce the first transit data on K2-3d from a ground-based telescope. This fifth transit has refined the orbital period of K2-3d to within about 18 seconds, setting up future transit observations of a world on the inner edge of its star’s habitable zone. 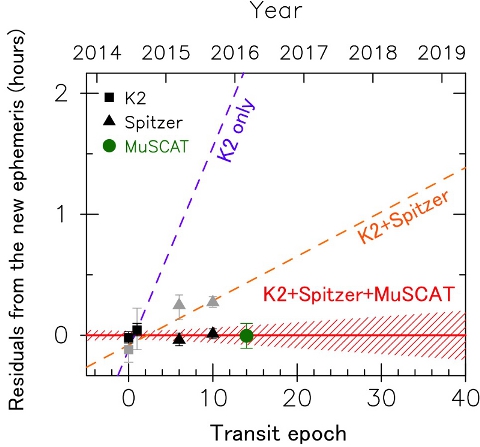 Image: Predicted transit time deviation from the improved K2-3d transit ephemeris based on this research. The solid red line indicates the predicted times based on this research, the shaded area shows the uncertainty range. Squares, triangles, and circles are respectively the transit time data from the Kepler Telescope, Spitzer Space Telescope, and the latest observing instrument MuSCAT on the Okayama 188-cm Reflector Telescope. Gray marks show the values calculated in previous research and black marks represent the values re-calculated in this research. Purple and orange dotted lines are the transit ephemerides calculated in previous research using the K2 and the K2+Spitzer data, respectively. This research succeeded in correcting the predictions for the 2018 transit times by more than an hour. (credit: NAOJ).

The decrease in brightness of the host star as K2-3d transits is small, but the next generation of large telescopes should have plenty to work with. From the paper:

The transit depth of K2-3d is the second shallowest among those observed by ground-based telescopes, following 55 Cnc e (0.4 mmag transit observed by the 2.5m Nordic Optical Telescope, de Mooij et al. 2014). Our observation demonstrates that ground-based photometric observations can play an important role in improving the transit ephemeris of small-sized, long-period planets, including potentially habitable ones, discovered by ongoing and future space-based transit surveys such as K2 and the Transiting Exoplanet Survey Satellite (Ricker et al. 2015), whose survey durations are limited.

K2-3d will not be the last transiting planet discovered by K2, which continues its mission until at least February of 2018, and as the paper notes, we can look forward to the Transiting Exoplanet Survey Satellite (TESS), scheduled for launch in December of 2017. While K2-3d is a useful addition to the catalog, we will likely find numerous small planets even closer for follow-up studies of their atmosphere. Ground-based observations to measure the ephemerides of transiting planets will be crucial as we bulk up our catalog of nearby worlds.