Visualizing the Alien: A Hollywood Conundrum

Aliens used to look more or less like humans in the films of the 1950s. Think Michael Rennie in The Day the Earth Stood Still (1951), a polished alien presence if there ever was one. We got humanoid aliens with strange powers or technologies, like Jeff Morrow playing Exeter in This Island Earth (1955) — a prominent forehead and strange hair is all it takes. Even James Arness’ vegetable man (The Thing from Another World, 1951), although seen but briefly and on a rampage, is recognizably humanoid. 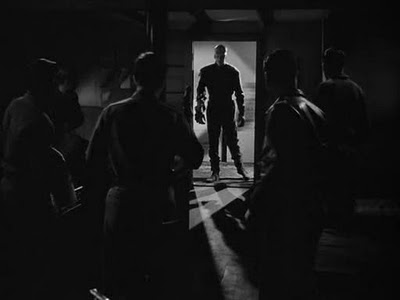 Image: James Arness makes his appearance in Howard Hawks’ The Thing from Another World.

I watched all those films and many other SF movies besides when I was growing up, almost all on TV re-runs. Later, special effects would vastly improve, and non-humanoid aliens thrived, my favorite being the repulsive title character in Ridley Scott’s Alien (1979), so dramatically visualized by Swiss surrealist Hans Rudolf Giger. Now we see aliens in all shapes and sizes, from the many-toothed predator that causes problems for the local (all too humanoid) beings in James Cameron’s Avatar (2009) to the shape-changing monstrosity of John Carpenter’s 1982 version of The Thing.

Science writer Leslie Mullen has a nice piece on Hollywood depictions of aliens whose title carries the punch: We’re Still Waiting for Hollywood to Depict a Plausible Alien Ecosystem. Interestingly, one of the big problems that the scientists she interviewed see in Hollywood is that its aliens seem to have no constraints on their growth. I hadn’t even noticed this, but of course it’s true: The creature in the original Alien pops out of John Hurt’s chest (a memorable scene indeed) and almost immediately begins to grow.

But how? Mullen quotes biochemist Jim Cleaves (Institute for Advanced Study) on the matter:

“The alien always bothered me. Somehow it manages to turn a few pounds of biomass into several hundred pounds of really hyperactive alien really quickly, without actually eating anything.”

Nutritional issues are a common theme in critiques voiced in this piece by Cleaves and Caleb Scharf (Columbia University), who has his own bone to pick with Avatar:

“There’s a creature with lots of teeth. It’s cool. But whenever you invoke such a monstrous thing, you have to ask, Could this ecosystem really support that? We had dinosaurs at one point, but there were a lot of them, and an enormous food pyramid to support that. So you wouldn’t have a quiet forest except for one enormous monster. What are they eating?”

And how about the enemy ‘bugs’ in Paul Verhoeven’s Starship Troopers (1997)? What exactly did they do to stay alive?

Plugging in a monster moves a plot right along, of course, but if that’s all it’s doing, the plot is neglecting to examine how a real biosphere would work. That would be a sensationally complex task, but given the amount of research now going on in astrobiology and exoplanetary science, the suspicion here is that experts could be summoned who could produce such a film. Even so, there is something to be said for not seeing aliens.

Think 2001: A Space Odyssey, where we see artifacts rather than beings, a fact which lets the viewer’s imagination speculate on what the builders of the monoliths might have been like. Or think about Arkady and Boris Strugatsky’s 1971 novel Roadside Picnic. Andrei Tarkovsky’s film Stalker (1979) grew out of this, with screenplay by the authors. Here we see the aftermath of an extraterrestrial visitation that took place simultaneously at locations around the world. No aliens are seen, but the six Visitation Zones are scattered with odd, incomprehensible artifacts. An illegal smuggling trade in these artifacts emerges. But just who were these aliens, what was their purpose, and did they even notice the fact that they were, briefly, in the midst of an active technological civilization? 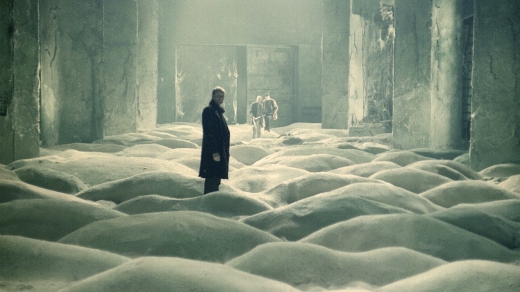 Image: No aliens here, which actually gives Stalker its force. What to make of an incomprehensible technology’s detritus?

Mullen’s essay quotes Penny Boston (NASA Astrobiology Institute) on a form of life that may challenge Hollywood’s best special effects crews. Robert Forward’s novel Dragon’s Egg (1980) depicts life on a neutron star with a surface gravity 67 billion times that of the Earth. Here we find the Cheela, which are tiny creatures whose civilization advances a million times faster than our own, as observed by humans in an orbiting craft.

How screenwriters would handle scenes on a neutron star is an open question, but each new movie gives us the opportunity to watch another treatment of an issue that has gone from Hollywood trope to serious speculation in a few short decades. Think about this as you evaluate the aliens in Denis Villeneuve’s new film Arrival, and ponder the directions evolution might take given billions of possible worlds on which to work its magic.

Even back in the days of the original Star Trek, as Caleb Scharf notes in Mullen’s essay, writers dreamed up the Horta (the episode was “The Devil in the Dark”), who look like nothing more than rocks. It takes the crew a while to realize they are intelligent. I’m reminded of something Jacob Bronowski said in his TV series The Ascent of Man (1973):

Within the last few years there have been found in the interstellar spaces the spectral traces of molecules which we never thought could be formed out in those frigid regions: hydrogen cyanide, cyanoacetylene, formaldehyde. These are molecules which we had not supposed to exist elsewhere than on Earth. It may turn out that life had more varied beginnings and has more varied forms. And it does not at all follow that the evolutionary path which life (if we discover it) took elsewhere must resemble ours. It does not even follow that we shall recognise it as life — or that it will recognise us.”

Previous post: Tight Constraints on Orbit of a Transiting ‘Super-Earth’