One of the great pleasures of doing this site is watching researchers matching ideas in peer-reviewed papers. A paper can meet the highest standards for publication but still present an argument that subsequent researchers question, igniting a new round of debate. Trying to get at the heart of a scientific question requires patience, but it’s also as absorbing as a chess game, as witness the continuing debate over the history and significance of Pluto’s Sputnik Planitia. And in this case, we have a researcher working both sides of the controversy.

Resembling a polar ice cap, Sputnik Planitia is about 1000 kilometers across, and is centered on a latitude of 25 degrees north and a longitude of 175 degrees. Moreover, it is directly opposite the side of Pluto that always faces Charon, the result of tidal lock. Two weeks ago we looked at the possibility that this western lobe of Pluto’s ‘heart,’ a deep basin filled with frozen gases like nitrogen, carbon dioxide and methane, was the result of a relatively late impact, perhaps one as large as the impact that created Charon. The implications here were striking, particularly the possibility that Sputnik Planitia was a clue pointing to a subsurface ocean (see Pluto: Sputnik Planitia Gives Credence to Possible Ocean for references).

Today we look at a different possibility in a paper from Douglas Hamilton (University of Maryland), who worked with Francis Nimmo et al. on the subsurface ocean paper. The point is, there are dueling explanations here, and we need to examine them both along with any other potential candidates to explain Sputnik Planitia. After all, it’s a huge feature, and we find ice caps on only three worlds in our Solar System, making its formation a matter of interest whether or not its presence actually indicates an ocean beneath the ice. 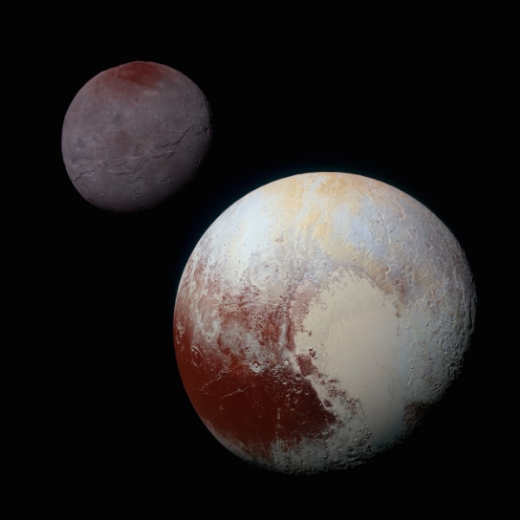 The model Hamilton studies in this paper is one in which there is no impact, and the ice cap actually formed early in Pluto’s development, providing the surface asymmetry that eventually causes the ice cap to become locked on the side of the world opposite Charon. Remember that Pluto’s spin axis is tilted to 120 degrees. Ice would form in the coldest places on the planet, which in Pluto’s case are latitudes 30 degrees north and south. Temperatures here are far colder than either pole, a zone that includes latitude 25-degree north Sputnik Planitia.

Hamilton and colleagues see a runaway albedo effect as a possibility here, a positive feedback mechanism that begins with a small ice deposit and accumulates more and more ices until a dominant ice cap emerges. It is the gradual shift in the dwarf planet’s mass, then, that came into play to ensure that Sputnik Planitia would, as Pluto slowed due to Charon’s gravity, either face Charon or emerge on the opposite side of the world from its moon. The chances are 50-50, as Hamilton notes: “It is like a Vegas slot machine with just two states, and Sputnik Planitia ended up in the latter position, centered at 175 degrees longitude.”

So there we have it, a new possibility in which Sputnik Planitia formed not through an impact, but through the weight of accumulating surface ices. The formation of a basin like this one is not so different from what we see on Earth in the Greenland Ice Sheet, where a basin forms and pushes down on the crust beneath it, although Hamilton adds that Pluto’s basin is larger than the volume of ice it currently contains, evidence that Sputnik Planitia is losing mass over time. Either formation model fits the New Horizons data, leaving us with an inconclusive result about that putative ocean. Under the right conditions, says Hamilton, either model is viable.