Up Close at Alpha Centauri

In early December the Harvard-Smithsonian Center for Astrophysics offered as part of its fall colloquium series a talk by Harvard’s Avi Loeb, fortunately captured on YouTube as Project Starshot: Visiting the Nearest Star Within Our Lifetime. We’ve looked at Breakthrough Starshot in many posts on Centauri Dreams, including my reports from the last set of meetings in Palo Alto, but for those new to the concept of using a laser array to send small, instrumented sails to the Alpha Centauri stars, this video is a fine introduction.

You’ll recall that yesterday I talked about Robert Austin’s futuristic Asteroid Belt Astronomical Telescope, with an illustration of what such an instrument might see of the exoplanet Gliese 832c. If Starshot can achieve its goals, it will be able to make out continent sized features on the surface of Proxima b, or perhaps a planet around Centauri A or B. It would achieve, in other words, what it would take a near-Earth space-based telescope 300 kilometers wide to equal. 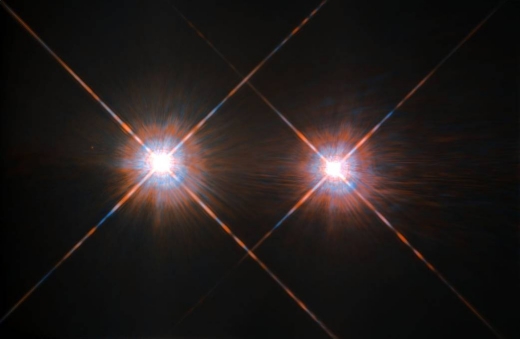 Image: What we can see today. The NASA/ESA Hubble Space Telescope has given us this stunning view of the bright Alpha Centauri A (on the left) and Alpha Centauri B (on the right), shining like huge cosmic headlamps in the dark. The image was captured by the Wide-Field and Planetary Camera 2 (WFPC2). WFPC2 was Hubble’s most used instrument for the first 13 years of the space telescope’s life, being replaced in 2009 by Wide-Field Camera 3 (WFC3) during Servicing Mission 4. This portrait of Alpha Centauri was produced by observations carried out at optical and near-infrared wavelengths. Credit: ESA/NASA.

Starshot envisions sending swarms of sails to its target stars, each moving at 20 percent of the speed of light. Each four-meter square lightsail would itself be used as the transmitter dish to beam data back to Earth showing us images of the planet, with each sail sending 100 images over the course of its observations. The time frames are interesting: If all goes without a hitch (and it’s hard to conceive of there being no hitches in a plan this ambitious), it will take several decades to build a beamer and create the actual sails and payload.

Then we have a launch, which takes place in a timeframe of minutes, as a mothership in a highly elliptical orbit releases a sail that is then under the beam for an intense 60,000 g ride. You can imagine all the stresses this puts on the sail, and again, we’ve talked about most of these in previous posts, but Avi Loeb’s presentation offers an excellent refresher, covering factors like sail stability under the beam, sail materials and interstellar dust encounters.

The launch phase ends in minutes and a 20 year cruise phase begins. In the Proxima Centauri system after the journey, each sail now faces an encounter time measured in hours. Thus the pattern: Hurry up and wait. For after the flyby, we face more time, a 4.24 year wait for the first images of the planet to come back to Earth. Interestingly, despite moving at relativistic speed, the planet’s image will remain circular thanks to so-called Terrell rotation.

Loeb mentions as a driver for investigation of Proxima Centauri in particular the fact that M-dwarfs make up a huge percentage of all the stars in the galaxy, and they can live for trillions of years. If we learn that life exists around this kind of star, we learn that living things will have incredibly long timeframes to continue to evolve. We also learn that the kind of environments found around red dwarfs are far more common than what we find around our own familiar G-class star. In many respects, we may wind up being the outliers.

Facets of the Journey

Yesterday I asked what effect being able to see images of planets like Proxima b from telescopes in our own Solar System would have on our thinking. Some would argue that we’ll reach the point where we can learn enough about exoplanets in such observations and will not need to build probes to other stars. My own view is that the two prospects work together. I think any images of a living, Earth-like world around a nearby star are going to focus interest in getting a payload into that system in order to make close up imagery and data possible.

On that score, you’ll recall Project Blue, the attempt to build a small space telescope explicitly designed to detect possible planets in the habitable zones around Centauri A and B (see Project Blue: Imaging Alpha Centauri Planets). Documentary filmmakers who are supporting Project Blue bring Debra Fischer (Yale University), one of its key players, into their new short video Traveling to Alpha Centauri? which explores the same terrain.

Although the video suggests antimatter rather than laser-beamed sails as a solution to the propulsion problem, Fischer’s comments go to the question of what the information we gain from our telescopes can motivate us to do.

If we discover an Earth-like planet orbiting Alpha Centauri, this is really going to drive a whole new era in science, an explosion, to finally go out into the galaxy and to start exploring other worlds.

Fischer goes on to speak of a ‘new wave within humanity to begin taking our steps out of our Solar System’ as a part of achieving the destiny of our species. I’m in agreement, and not just at the level of Project Blue. We could know within a decade or so about possible planets in the habitable zones of the two primary Centauri stars, and we may be able not long afterward to begin analyzing their atmospheres. I believe that hints of life on such worlds will ignite the imagination of the general public in support of projects to explore them up close. To me, Breakthrough Starshot and Project Blue, so different in their scale and conception, are nonetheless two sides of the same coin. An exploring species watches, learns and goes.