I was saddened to learn through Tau Zero Foundation CEO Rhonda Stevenson of the recent death of Loretta Jackson Delong. Stevenson issued this statement

The Tau Zero Foundation extends its sincerest condolences to Dan DeLong, the XCOR and Agile families for the great loss of Loretta Jackson Delong. She was a pioneer from the start, as she knew from the time she was twelve that she would build and fly spaceships. Through her life’s journey, she repeatedly demonstrated rigor and grit, and she will be missed.

The loss hits home particularly at Tau Zero because Aleta, as she was known to her friends, was a co-founder of XCOR, where she worked closely with co-founder and former CEO Jeff Greason, who is now chairman of the Tau Zero Foundation board. She would go on to collaborate with Greason again in the creation of Agile Aero, a Midland, TX-based startup targeting rapid design and prototyping techniques for space launch, hypersonic vehicles, and innovative aircraft. Greason is CEO of Agile Aero. 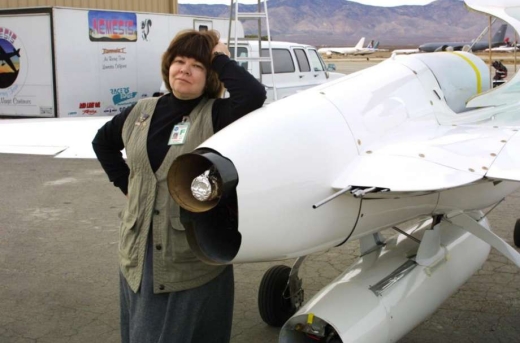 The Transterrestrial Musings blog offered more information about Aleta’s background than I had available, so I’m going to draw this directly from the site:

Aleta knew from the time she was twelve that she would build and fly spaceships. Her first professional work was as an engineering co op from Indiana Tech working on the Gemini program for McDonnell. Her engineering degree was cut short when she went home to nurse her mother back to health. After that, she joined the USAF as airman Jackson.

Aleta worked for Xerox for ten years as a repair technician and wrote both science fiction and nonfiction stories. She worked for the L-5 Society, both in Tucson and later in Washington DC. During her stay in DC, Aleta became an aide to General Daniel Graham and helped create the DC-X launch vehicle, later renamed the Clipper Graham. She also edited the Journal of Practical Applications of Space while with Graham’s Strategic Defense Initiative Organization.

As an indefatigable supporter of launch vehicle development, Aleta then became one of Rotary Rocket Company’s first employees, where she was general office manager. When the propulsion group was laid off from Rotary, Aleta was the person who told Jeff Greason, Dan DeLong, and Doug Jones that they had to stick with it, and founded XCOR Aerospace.

In the beginning, because the XCOR founders received no pay, Aleta took an additional job as a reporter/editor of the Mojave Desert News. Meanwhile, she was XCOR’s purchasing, personnel, bookkeeping, editorial, receiving, community outreach, and travel departments. As the company grew, she shed most of these tasks. In late 2015 she helped Jeff Greason start Agile Aero. Aleta was a personal as well as professional partner of Dan DeLong since the early days of Rotary, and they were officially married in 2016. The very next day, however, she was diagnosed with ovarian cancer, and succumbed to complications of the chemotherapy regimen.

And I think Jeff Greason’s comment is well worth quoting from this news story:

“During the time before I came to know her in the late ’80s and early ’90s, the idea of commercial or reusable space vehicles was a lonely idea to be a champion of… She was one of a very small number of people running around and keeping that idea alive. She was never somebody who put her name on the front door, but wherever you turned … you’d find her as the person keeping the community together.”

We now watch commercial space on a vibrant new track of development, making it sometimes easy to forget that the idea had little traction not so many years ago. People like
Loretta Jackson Delong got out in front and made things happen because of their belief in our human future in space and their determination to explore new ways of getting there. Centauri Dreams offers condolences to Dan DeLong, Aleta’s family and all those whose lives she touched.