The Australian Institute of Physics Congress ends today in Brisbane, concluding a schedule of talks that can be viewed here. Among the numerous research presentations was the description of a new optical chip for telescopes that should help astronomers tease out the image of a planet through thermal imaging, nulling out the light of the host star. The new photonic chip could be a replacement for bulk optics at the needed mid-infrared wavelengths.

Harry-Dean Kenchington Goldsmith, a PhD candidate who built the chip at the Australian National University Physics Center, says that the same technology that allows astronomers to penetrate dust clouds to see planets in formation will also be used to study the atmospheres of potentially life-bearing planets. ANU’s Steve Madden describes the chip as an interferometer that “adds equal but opposite light waves from a host sun which cancels out the light from the sun,” making it possible to detect the much fainter light of a planet. He likened the chip’s operation to the methods used in noise cancelling headphones.

This is important work because to understand planet formation, we have to learn more about how planets emerge from the gaseous disk surrounding the parent star. Doing this requires direct imaging at mid-infrared wavelengths, a method that has yielded young planets in formation as well as large exoplanets in distant orbits from their hosts. The next step will be to improve our methods of blanking out the star’s light for better imaging and, as this ANU news release points out, spectroscopic analysis of planetary atmospheres. 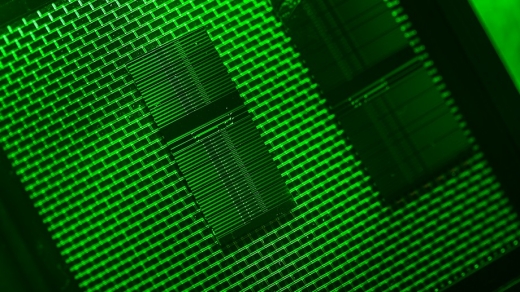 It turns out that Ronald Bracewell (yes, that Bracewell) discussed these issues back in 1978, proposing what has come to be called the Bracewell nuller, which causes light from a star to destructively interfere, cancelling the star’s light so the planet can be observed. Thinking ahead to our own era of exoplanet discovery, Bracewell suggested using the method as a way to find planets around other stars. Along with a coronagraph (a different technique altogether), a nulling interferometer was considered for use in two high visibility but ultimately cancelled missions, NASA’s Terrestrial Planet Finder and the European Space Agency’s Darwin.

The ANU team brings nulling techniques to a photonic chip. This morning while digging around in the paper on this work, I received a comment from Centauri Dreams reader Mike Fidler, who pointed readers to a shorter (though highly technical) description of the chip in one of ANU’s publications. The key point here is that using photonic chips we can replace some operations normally handled through conventional optics. From the paper on this work:

Photonic integrated circuits are established as the technique of choice for a number of astronomical processing functions due to their compactness, high level of integration, low losses, and stability. Temperature control, mechanical vibration and acoustic noise become controllable for such a device enabling much more complex processing than can realistically be considered with bulk optics.

These are major benefits, making this a technology we’ll continue to follow with interest.