John Glenn: An Arc of Fire

John Glenn was 95 when he died, but I have to admit I didn’t think he’d make it to 41. The first American to orbit the Earth was 40 years old when he rode an Atlas rocket into the sky on February 20, 1962. I was a gawky kid, space-crazed, who had read absolutely everything I could find about the space program, and I knew just enough to understand that the Atlas, for all its muscular beauty, wasn’t necessarily the safest thing you’d want to fly. 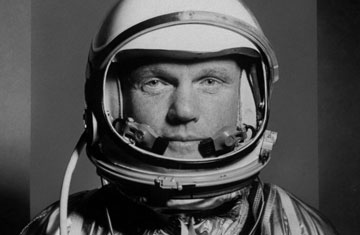 Our school had set up a black and white television on the stage in the auditorium so we could all see the liftoff, which took place at 8:47 A.M. in St. Louis. In this era of enormous home viewing screens it’s hard to imagine what a single small television could show to an auditorium filled with students, but at the time it was a window into history and we watched avidly as the rocket cut into the sky, and got later updates from teachers as Glenn orbited.

We all assumed the hard part was over after the launch, and I know I was certainly breathing easier, but of course we’ve come to learn that there were concerns about the Friendship 7’s heat shield because of what would turn out to be a faulty indicator. Controllers instructed Glenn to leave the retro-rocket pack on over the shield to help keep it in place, leading to metal straps breaking free during re-entry and banging against the side of the capsule. After splashing down, he would radio: “My condition is good, but that was a real fireball, boy.”

Nor was the heat shield concern Glenn’s only problem. A yaw attitude jet became clogged in his first orbit, forcing the astronaut to take manual control of the capsule. But this was a flier whose instincts were well honed. Flying Corsairs for Marine squadron VMF-155, he would see 59 combat missions in the Pacific, numerous training missions in the years after, and then further duty flying jets in Korea, where he racked up another 90 combat missions. At one point his wingman was baseball legend Ted Williams. In 1957, he would complete the first supersonic transcontinental flight, a feat he managed in 3 hours and 23 minutes.

Glenn’s decision to go into politics may well have originated out of frustration at not being able to get another space mission as the Gemini and Apollo programs advanced, although he also worked for a time as a business executive before making it to the U.S. Senate. He was in an awkward position, with his status as a national hero keeping him out of the active flight roster, although as Centauri Dreams readers know, he would return to space in 1998 aboard the shuttle Discovery, a visit that would make him the oldest person to fly in space.

This New York Times essay by John Noble Wilford captures the character of the man, an iconic figure with a gift for understatement and a hugely likable humility:

Mr. Glenn was reluctant to talk about himself as a hero. “I figure I’m the same person who grew up in New Concord, Ohio, and went off through the years to participate in a lot of events of importance,” he said in an interview years later. “What got a lot of attention, I think, was the tenuous times we thought we were living in back in the Cold War. I don’t think it was about me. All this would have happened to anyone who happened to be selected for that flight.”

We also learn that Glenn was so determined to get into the new astronaut program in 1959 that he put weights on his head, trying to compress himself down to the 5-foot-11-inch maximum required. Like, I suppose, all of the original Mercury 7, Glenn wanted to be aboard the first American flight into space, but these days it’s not Alan Shepard’s suborbital Redstone flight but Glenn’s three orbits that most symbolize the drama of the early program. 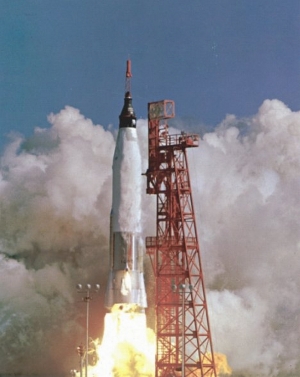 And how about this from Wilford’s essay, on the 1983 film The Right Stuff?

Mr. Glenn said he liked the book but not the 1983 movie based on it, in which he was portrayed by Ed Harris. “Most of his account was reasonably factual, although I was neither the pious saint nor the other guys the hellions he made them into,” he told Life magazine in 1998. “Hollywood made a charade out of the story and caricatures out of the people in it.”

I spent the evening recalling that liftoff from Pad 14. Sadness was part of the equation, but I also felt a certain lightness of being. Here was a man who lived well and long, fully 95 years, a man who flew his Beechcraft Baron until he was 90, a man who lived with the woman he loved for 73 years. Who could hope to do better than that? For me, this doggedly courageous man will always be arcing up into a bright February sky. He calls up these lines of Leonardo da Vinci: “Knowing is not enough; we must apply. Being willing is not enough; we must do.”