A New Look at Ice on Ceres

Ceres, that interesting dwarf planet in the asteroid belt, is confirmed to be just as icy as we had assumed. In fact, a new study of the world, led by Thomas Prettyman (Planetary Science Institute), was the subject of a press conference yesterday at the American Geophysical Union fall meeting in San Francisco. Prettyman and team used data from the Dawn spacecraft’s Gamma Ray and Neutron Detector (GRaND) instrument to measure the concentrations of iron, hydrogen and potassium in the uppermost meter of Ceres’ surface.

Prettyman, who is principal investigator on GRaND, oversees an instrument that works by measuring the number and energy of gamma rays and neutrons coming from Ceres. The neutrons are the result of galactic cosmic rays interacting with the surface, some of them being absorbed while others escape. The number and kind of these interactions allows researchers to investigate surface composition. Hydrogen on Ceres is thought to be in the form of frozen water, allowing the researchers to study the global distribution of ice.

The result of the GRaND study: The elemental data show that the materials were processed by liquid water within the interior. The top layer of Ceres’ surface is hydrogen rich, with the higher concentrations found at mid- to high latitudes, a finding consistent with near surface water ice, with the ice table closest to the surface at the higher latitudes. Says Prettyman:

“On Ceres, ice is not just localized to a few craters. It’s everywhere, and nearer to the surface with higher latitudes. These results confirm predictions made nearly three decades ago that ice can survive for billions of years within a meter of the surface of Ceres. The evidence strengthens the case for the presence of near-surface water ice on other main belt asteroids.” 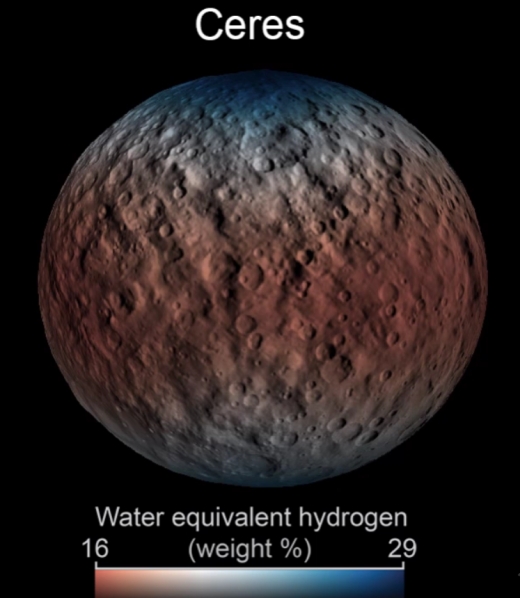 But we have no solid ice layer here. Instead, Ceres’ surface appears to be a porous mixture of rocky materials, with ice filling the pores, as this Institute for Astronomy (University of Hawaii) news release makes clear. The GRaND findings show about 10 percent ice by weight.

Also interesting is that the elemental composition of Ceres differs from CI and CM carbonaceous chondrite meteorites, which represent some of the most primitive, undifferentiated meteorites we know (Cl and CM are two of several different subgroupings within the carbonaceous chondrite family). These meteorites were also altered by water, but the GRaND data tell us that their parent body would have differed markedly from Ceres.

The researchers offer two explanations, the first being that large scale convection occurring within Ceres may have separated ice and rock components, leaving the surface with a different composition than the bulk of the object. The other possibility is that Ceres formed in a different location in the Solar System than the parent object of this class of meteorite.

A second paper on Ceres has also appeared, this one in Nature. It is the work of Thomas Platz (Max Planck Institute for Solar System Research, Göttingen) and colleagues, who focus on craters that are found in persistently shadowed regions. These ‘cold traps’ are cold enough (about 110 K) that little of their ice turns into vapor. Bright material found in some of these craters is thought to be ice, and Dawn’s infrared mapping spectrometer has indeed confirmed ice in at least one.

As is the case with the Moon and Mercury, ice in such cold traps is thought to be the result of impacting bodies, although solar wind interactions are also a possibility. Each of these bodies has a small tilt compared to its axis of rotation, producing numerous permanently shadowed craters. “We are interested in how this ice got there and how it managed to last so long,” said co-author Norbert Schörghofer (University of Hawaii at Manoa). “It could have come from Ceres’ ice-rich crust, or it could have been delivered from space.”

But the comparison between what we find on Ceres and elsewhere in the Solar System reminds us how much we still have to learn about the process. From the paper::

The direct identification of water-ice deposits in PSRs [permanently shadowed regions] on Ceres builds on mounting evidence from Mercury and the Moon that PSRs are able to trap and preserve water ice. For the Moon, the abundance and distribution of cold-trapped ice is little understood. On Mercury, the cold traps are filled with ice, and the planet traps about the same fraction of exospheric water as Ceres, so either the PSRs on Ceres are not able to retain as much water ice as those on Mercury or the amount of available water is much lower.

The Prettyman paper is “Extensive water ice within Ceres’ aqueously altered regolith: Evidence from nuclear spectroscopy,” published online by Science 15 December 2016 (abstract). The Platz paper is “Surface water-ice deposits in the northern shadowed regions of Ceres,” published online by Nature Astronomy 15 December 2016 (abstract). Video of the press briefing at the AGU meeting can be accessed here.

Previous post: Surviving the Journey: Spacecraft on a Chip