What kind of planets are most common in the outer reaches of a planetary system? It’s a tricky question because most of the data we’ve gathered on exoplanets has to do with the inner regions. Both transit and radial velocity studies work best with large planets near their stars. But a new gravitational microlensing study looks hard at outer system planets, finding that planets of Neptune’s mass are those most likely to be found in these icy regions.

It should be no surprise that gravitational microlensing has produced few planets, about 50 so far, compared to the thousands detected through transit studies and radial velocity methods. After all, microlensing relies upon alignments that are far more unusual than even the transit method, in which a planet crosses the face of its star as seen from Earth. In microlensing, astronomers look for rare alignments between a distant star and one much nearer.

Given the right alignment, the ‘bending’ of spacetime caused by the nearer star’s mass allows researchers to study changes in the brightness of the background star, which can be clues to the existence of a planet. Microlensing can see not just planets close to their host stars but those far distant from the primary. Moreover, as the new work points out, we can use microlensing to figure out the mass ratio of the planet to the host star, and in about 40 percent of events, we can measure the mass of the host star and planet themselves.

A team led by Daisuke Suzuki (NASA GSFC) identified 1474 microlensing events between 2007 and 2012, drawing on data from the Microlensing Observations in Astrophysics (MOA) project, a collaboration between Japanese and New Zealand researchers that alerted astronomers to 3300 potential microlensing events in this time period. The analysis also incorporates data from the Optical Gravitational Lensing Experiment (OGLE).

Suzuki and colleagues homed in on the frequency of planets compared to the mass ratio of planet and star and the distances between them. A typical planet-hosting star is about 60 percent of the mass of the Sun. Its typical planet is between 10 and 40 times the mass of the Earth. By comparison, Neptune is about 17 Earth masses, while Jupiter is 318 times as massive as the Earth. Cold Neptune-mass worlds are thus identified as the most common kinds of planets beyond the ‘snow line,’ the point in a planetary system beyond which water remained frozen during planetary formation. In our Solar System, the snow line is at about 2.7 AU, roughly the middle of the main asteroid belt.

The paper surveys stars toward the galactic bulge, where the chances of a microlensing alignment are highest. Says Suzuki:

“We’ve found the apparent sweet spot in the sizes of cold planets. Contrary to some theoretical predictions, we infer from current detections that the most numerous have masses similar to Neptune, and there doesn’t seem to be the expected increase in number at lower masses. We conclude that Neptune-mass planets in these outer orbits are about 10 times more common than Jupiter-mass planets in Jupiter-like orbits.” 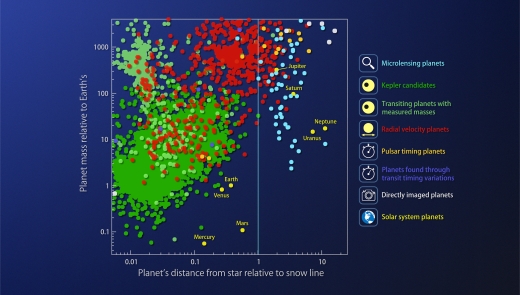 Image: This graph plots 4,769 exoplanets and planet candidates according to their masses and relative distances from the snow line, the point where water and other materials freeze solid (vertical cyan line). Gravitational microlensing is particularly sensitive to planets in this region. Planets are shaded according to the discovery technique listed at right. Masses for unconfirmed planetary candidates from NASA’s Kepler mission are calculated based on their sizes. For comparison, the graph also includes the planets of our solar system. Credit: NASA’s Goddard Space Flight Center

So based on the MOA data, planets forming in the outer reaches of a planetary system are likely to be Neptunes. But remember the limitations of the data here — we have relatively few detected exoplanets, and in fact, only 22 planets (with a possible 23rd) show up in the 1474 MOA events. What’s heartening is how we are going to go about expanding that dataset.

Tightening up the constraints on mass and distance to the lens systems will ultimately allow us to measure what the paper calls the ‘microlensing parallax effect,’ determining the distance of the system with the help of space telescopes far from the Earth. From the paper:

The ultimate word on the statistical properties of planetary systems will be achieved from the space based exoplanet survey (Bennett & Rhie 2002) of the WFIRST (Spergel et al. 2015) mission, and hopefully also the Euclid (Penny et al. 2013) mission. The high angular resolution of these space telescopes will allow mass and distance determinations of thousands of exoplanets because it will be possible to detect the lens star and measure the lens-source relative proper motion with the high resolution survey data itself. This will give us the same comprehensive picture of the properties of cold exoplanets that Kepler is providing for hot planets.

WFIRST (Wide Field Infrared Survey Telescope) was formally designated as a NASA mission at the beginning of this year. To be launched in the mid-2020s, it will carry a 288 megapixel multi-band near-infrared camera and a coronagraph for the suppression of starlight. ESA’s Euclid mission, like WFIRST, has a gravitational microlensing component, with a launch date in late 2020. If we can use space-based resources like these to enrich our microlensing catalog, our understanding of the outer precincts of exoplanetary systems will surge.

The paper is Suzuki et al., “The Exoplanet Mass-Ratio Function from the MOA-II Survey: Discovery of a Break and Likely Peak at a Neptune Mass,” Astrophysical Journal Vol. 833, No. 2 (13 December 2016). Abstract / preprint.

Previous post: A New Look at Ice on Ceres