Let’s talk this morning about the relationship of Proxima Centauri to nearby Centauri A and B, because it’s an important issue in our investigations of Proxima b, not to mention the evolution of the entire system. Have a look at the image below, which shows Proxima Centauri’s orbit as determined by Pierre Kervella (CNRS/Universidad de Chile), Frédéric Thévenin (Observatoire de la Côte d’Azur) and Christophe Lovis (Observatoire astronomique de l’Université de Genève). The three astronomers have demonstrated that all three stars — Proxima Centauri as well as Centauri A and B — form a single, gravitationally bound system. 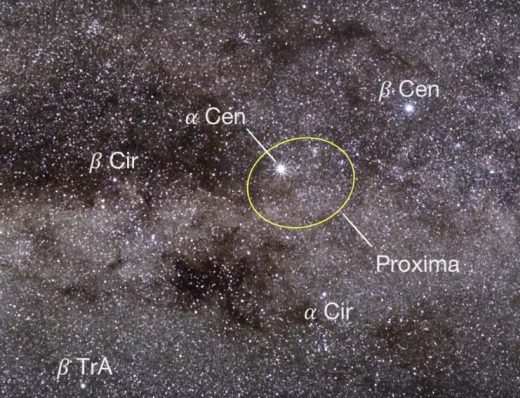 Image: Proxima Centauri’s orbit (shown in yellow) around the Centauri A and B binary. Credit: Kervella, Thévenin and Lovis.

A couple of things to point out here, the first being the overall image. You’ll see Alpha Centauri clearly labeled within the yellow ellipse of Proxima’s orbit. Off to the right of the ellipse, you’ll see Beta Centauri. I often see the image of these two stars identified as Centauri A and B, but Kervella et al have it right. The single bright ‘star’ within the ellipse is the combined light of Centauri A and B. Beta Centauri, at the right, is an entirely different star, itself a triple system in the constellation Centaurus, at a distance of about 400 light years.

Now as to that orbit — 550,000 years for a single revolution — things get interesting. One reason it has been important to firm up Proxima’s orbit is that while a bound star would have affected the development of the entire system, the question has until now been unresolved. Was Proxima Centauri actually bound to Centauri A and B, or could it simply be passing by, associated with A and B only by happenstance? Back in 1993 Robert Matthews and Gerard Gilmore found this to be a borderline case, calling for further kinematic data to clarify the issue.

When Jeremy Wertheimer and Gregory Laughlin (UC-Santa Cruz) attacked the problem in 2006, they found it ‘quite likely’ that Proxima Centauri was bound to the A/B pair. If this were the case, it would mean that the trio probably formed together out of the same nearby material, with the result that we could expect them to have the same age and metallicity. Laughlin and Wertheimer assumed that future, yet more accurate kinematic measurements would make it clear ‘that Proxima Cen is currently near the apastron of an eccentric orbit…’

And now we have Kervella and team, who have used the HARPS instrument (High Accuracy Radial Velocity Planet Searcher) on ESO’s 3.6m instrument at La Silla to make the call. Using radial velocity and astrometry, the researchers have surmounted the main problem with determining Proxima’s bound state. The lack of high-precision radial velocity measurements has been the result of Proxima’s relative faintness, but drilling down into HARPS data has produced a new radial velocity of −21.700 ± 0.027 km s−1, which tracks nicely with the prediction of Wertheimer and Laughlin, and is low enough to indicate a bound state.

As we consider that interesting planet around Proxima Centauri, we now can ponder that its star is the same age as Centauri A and B, and that its age is a comparable 6 billion years, making the planet about a billion years older than our Earth. Exactly how the planet formed becomes an interesting issue as well, because we have interactions between three stars to think about. From the paper:

The orbital motion of Proxima could have played a significant role in the formation and evolution of its planet. Barnes et al. (2016) proposed that a passage of Proxima close to α Cen may have destabilized the original orbit(s) of Proxima’s planet(s), resulting in the current position of Proxima b. Conversely, it may also have influenced circumbinary planet formation around α Cen (Worth & Sigurdsson 2016). Alternatively, Proxima b may also have formed as a distant circumbinary planet of α Cen, and was subsequently captured by Proxima. In these scenarios, it could be an ocean planet resulting from the meltdown of an icy body (Brugger et al. 2016). Proxima b may therefore not have been located in the habitable zone (Ribas et al. 2016) for as long as the age of the α Cen system (5 to 7 Ga; Miglio & Montalbán 2005; Eggenberger et al. 2004; Kervella et al. 2003; Thévenin et al. 2002).

So there we are. Plenty of alternatives to ponder as we look into the origins of the nearest known planet to our Solar System. Just how the researchers tuned up the radial velocity data to avoid the problem of convective blueshift — where the star’s unstable surface can shift the observed wavelength of spectral lines – and gravitational redshift, which can likewise be misleading, is covered in the paper’s appendix. The selection of four strong very high signal-to-noise emission lines made the difference in this exquisitely tight measurement.