We’ve retrieved all the data from New Horizons’ flyby of Pluto/Charon in 2015, the last of it being acquired on October 25 of this year. But data analysis is a long and fascinating process, with papers emerging in the journals and new discoveries peppering their pages. The New Horizons science team submitted almost 50 scientific papers in 2016, and we can expect that stream of publication to continue in high gear as we move deeper into the Kuiper Belt.

For New Horizons is very much an ongoing enterprise, as Alan Stern’s latest PI’s Perspective makes clear. We have an encounter with a small Kuiper Belt object (KBO) called 2014 MU69 to think about, and the symmetry that Stern points to in his essay is striking. Two years ago New Horizons had just emerged from cruise hibernation as preparations for the Pluto/Charon encounter began. And exactly two years from now, we’ll be again following the incoming datastream as the last of the New Horizons targets comes into breathtaking proximity. 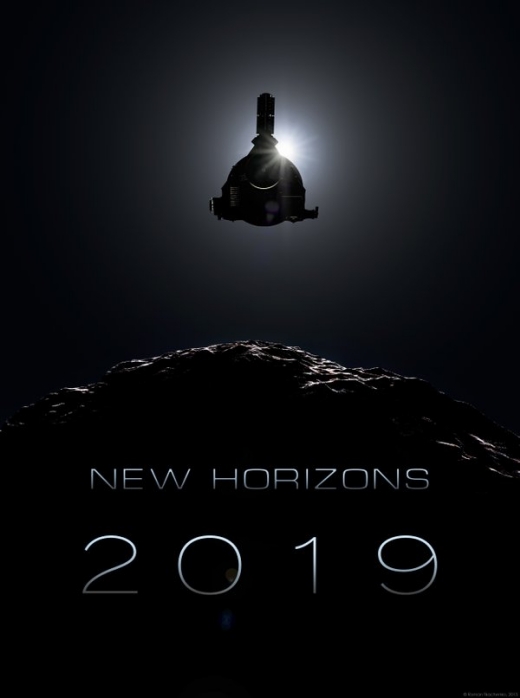 The year ahead will begin with observations of a half-dozen KBOs by our LORRI [LOng Range Reconnaissance Imager] telescope/imager in January. Those observations, like the ones we made in 2016 of another half-dozen KBOs, are designed to better understand the orbits, surface properties, shapes, satellite systems and frequency of rings around these objects. These observations can’t be done from any ground-based telescope, the Hubble Space Telescope, or any other spacecraft – because all of those other resources are either too far away or viewing from the wrong angles to accomplish this science. So this work is something that only New Horizons can accomplish.

Ponder that 2014 MU69 is almost 6.5 billion kilometers out and you have to wonder when we’ll next get a spacecraft this deep into the system. The answer has as much to do with funding as our technologies, since a wide variety of outer system probes have been under discussion in the last forty years. Each new deep space mission that actually flies fuels public interest, but the phenomenon is all too brief, and although space exploration seems to be flourishing in the movies these days, it’s hard to see a New Horizons sequel any time soon.

Even so, I’m optimistic in the longer term because the process in view in a mission of this complexity works its own kind of magic. Yesterday I wrote about Vera Rubin’s ability to communicate not just her love of the stars to young scientists she worked with but her values of tenacity, curiosity and exploration. In the same way, a mission executed with the precision of New Horizons has to set an example for budding scientists everywhere, a young population out of which will surely grow at least a few future principal investigators like Alan Stern.

New Horizons is a long way from home, and January will be used to take advantage of its position through measurements of hydrogen gas in the heliosphere (using the Alice ultraviolet spectrometer) and charged particles and dust (through the SWAP, PEPSSI and SDC instruments). What’s different today about space missions is that a student with a PC can drill deep into all this, following tweets from researchers, exploring ideas on blogs and reading direct communications from the mission team. The Apollo days were fantastic, but we could never get as close to a mission as we can get to a New Horizons, or a Dawn or a Rosetta.

There are going to be things to track in early 2017 as New Horizons makes yet another course correction, but the spacecraft will then enter hibernation until September, when a new round of KBO observations begins. As Stern points out, flyby operations for 2014 MU69 are set to commence in July of 2018, meaning that while the vehicle hibernates, the mission teams will be writing and testing the command sequences for the January 1, 2019 flyby.

So the absorbing process of a deep space mission continues to play out in space and on Earth. The first observations ever made of a Kuiper Belt Object from within the Kuiper Belt itself are now out in the form of a paper in Astrophysical Journal Letters. The object is 1994 JR1, studied through the LORRI instrument after the Pluto/Charon flyby from a distance of 1.85 AU and then about six months later from a distance of 0.71 AU. The earlier observations were supplemented with simultaneous Hubble studies of the same object. We learn quite a lot from these early observations. From the paper’s summary:

(15810) 1994 JR1 has a V-R of 0.76, making it a very red KBO [V-R refers to spectral slope, a measure of reflectance vs wavelength]. Unique New Horizons observations showed that JR1 has a high surface roughness of 37±5°, indicating that it is potentially very cratered. They also showed that the rotational period of JR1 is 5.47±0.33 hours, faster than most similar-sized KBOs, and enabled a reduction of radial uncertainty of JR1’s position from 105 to 103 km.

Moreover, New Horizons has revealed this KBOs interactions with the objects around it:

Neptune perturbations bring Pluto and JR1 close together every 2.4 million years, when Pluto can perturb JR1’s orbit. Future ground-based photometry of JR1 would be useful to better constrain the period and opposition surge, and to allow preliminary estimates of JR1’s shape and pole. These proof of concept distant KBO observations demonstrate that the New Horizons extended mission will indeed be capable of observing dozens of distant KBOs during its flight through the Kuiper Belt.

Ongoing science like this from the outer Solar System will snare the attention of people making their initial way into astronomy and astronautics. Who knows what careers will be shaped by these studies, and what new targets that next generation will explore?