What effect does the composition of a star have on the planets that form around it? Enough of one that we need to take it into account as we assess exoplanets in terms of astrobiology. So says a study that was presented at the American Astronomical Society meeting in Texas last week, looking at ninety specific stars identified by Kepler as having evidence of rocky planets.

We know about the composition of these stars because they are part of the 200,000 star dataset compiled by APOGEE, the Apache Point Observatory Galactic Evolution Experiment spectrograph mounted on the 2.5m Sloan Foundation telescope in New Mexico. APOGEE allows us to examine the spectra of stellar atmospheres to identify their elements.

Modeling the formation of planets around these stars shows us the implications for astrobiology. Johana Teske (Carnegie Observatories) explains:

“Our study combines new observations of stars with new models of planetary interiors. We want to better understand the diversity of small, rocky exoplanet composition and structure — how likely are they to have plate tectonics or magnetic fields?”

At the AAS meeting, Teske described how the team of astronomers and geoscientists she is working with focused on Kepler 102 and Kepler 407, the former a star slightly less luminous than the Sun hosting five known planets, the latter hosting two planets orbiting a star of roughly the Sun’s mass. The APOGEE data show that in terms of chemical composition, Kepler 102 is similar to the Sun, while Kepler 407 is much richer in silicon. 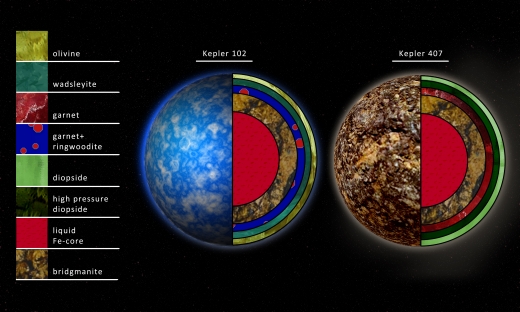 Image: The picture shows what minerals are likely to occur at several different depths. Kepler 102 is Earth-like, dominated by olivine minerals, whereas Kepler 407 is dominated by garnet, so less likely to have plate tectonics. Credit: Robin Dienel, Carnegie DTM.

In Unterborn’s view, the difference is significant because garnet, a far stiffer mineral than olivine, flows more slowly, implying a garnet planet would be unlikely to have long-term plate tectonics. Like the Earth, the planet around Kepler 102 could sustain tectonics, which are thought to be essential for life because atmospheric recycling through geological processes like volcanoes and ocean ridge formation regulates the atmosphere’s composition. Without such geological processes, life would not necessarily have the chance to evolve.

Centauri Dreams’ take: The interplay of the two datasets — APOGEE and Kepler — is deeply productive, but we’re only at the beginning of the analysis. APOGEE’s 200,000 stars include others known to host small planets, so similar methods can now be put to work on the mineral content of these worlds. Those most Earth-like in their mineral content would rank higher on our list for further astrobiological study, helping us refine our targets for future observation.