Breakthrough Starshot, the research and engineering effort to lay the groundwork for the launch of nanocraft to Alpha Centauri within a generation, is now investing in an attempt to learn a great deal more about possible planets around these stars. We already know about Proxima b, the highly interesting world orbiting the red dwarf in the system, but we also have a K- and G-class star here, either of which might have planets of its own. 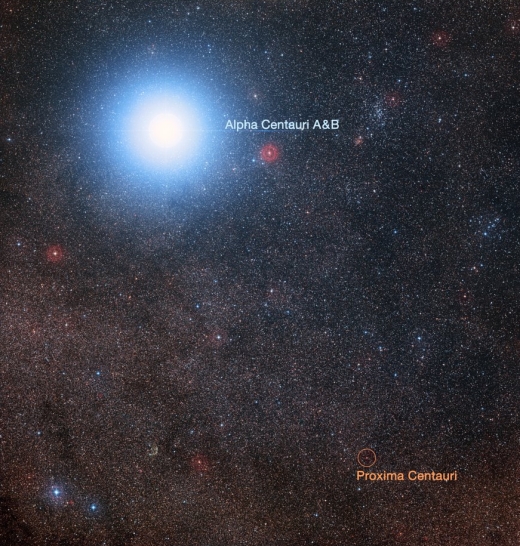 To learn more, Breakthrough Initiatives is working with the European Southern Observatory on modifications to the VISIR instrument (VLT Imager and Spectrometer for mid-Infrared) mounted at ESO’s Very Large Telescope (VLT). Observing in the infrared has advantages for detecting an exoplanet because the contrast between the light of the star and the light of the planet is diminished at these wavelengths, although the star is still millions of times brighter.

To surmount the problem, VISIR will be fitted out for adaptive optics. In addition, Kampf Telescope Optics of Munich will deliver a wavefront sensor and calibration device, while the University of Liège (Belgium) and Uppsala University (Sweden) will jointly develop a coronagraph that will mask the light of the star enough to reveal terrestrial planets.

Image: Paranal at sunset. This panoramic photograph captures the ESO Very Large Telescope (VLT) as twilight comes to Cerro Paranal. The enclosures of the VLT stand out in the picture as the telescopes in them are readied for the night. The VLT is the world’s most powerful advanced optical telescope, consisting of four Unit Telescopes with primary mirrors 8.2 metres in diameter and four movable 1.8-metre Auxiliary Telescopes (ATs), which can be seen in the left corner of the image. Credit: ESO.

According to the agreement signed by Breakthrough Initiatives executive director Pete Worden and European Southern Observatory director general Tim de Zeeuw, Breakthrough Initiatives will pay for a large part of the technology and development costs for the VISIR modifications. Meanwhile, the ESO will provide the necessary telescope time for a search program that will be conducted in 2019. The VISIR work, according to this ESO news release, should provide a proof of concept for the METIS instrument (Mid-infrared E-ELT Imager and Spectrograph), the third instrument on the upcoming European Extremely Large Telescope.