Nothing built by humans has ever gotten as far from our planet as Voyager 1, which is now almost 21 billion kilometers from Earth. We’ve talked about the future of both Voyagers before in these pages — Voyager 1 passes within about 1.6 light years of the star Gliese 445 in some 40,000 years, its closest approach to a neighboring star. Voyager 2, which is now almost 17 billion kilometers out, closes to within 1.7 light years of Ross 248 in the same 40,000 years.

My case for doing what Carl Sagan once discussed, giving each Voyager a final kick with its remaining hydrazine, so that those closing distances could be reduced, can be found in Voyager to a Star. It would be a symbolic and philosophical act rather than a scientific one, as both Voyagers are losing their ability to transmit data and will be silent in about a decade. And nothing can reduce those huge timeframes, which means that any such symbolic statement would be made to the future, a way of saying we are learning to be a starfaring species. 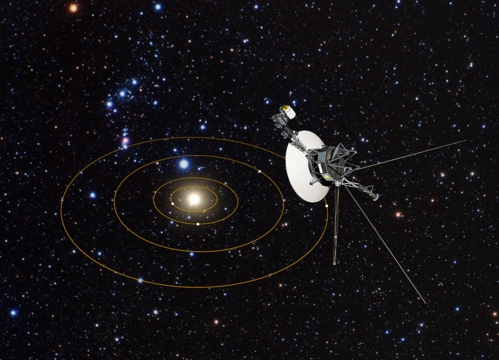 Image: In this artist’s conception, NASA’s Voyager 1 spacecraft has a bird’s-eye view of the solar system. The circles represent the orbits of the major outer planets: Jupiter, Saturn, Uranus, and Neptune. Launched in 1977, Voyager 1 visited the planets Jupiter and Saturn. The spacecraft is now 21 billion kilometers from Earth, making it the farthest and fastest-moving human-made object ever built. In fact, Voyager 1 is now zooming through interstellar space, the region between the stars that is filled with gas, dust, and material recycled from dying stars. Credit: NASA, ESA, and J. Zachary and S. Redfield (Wesleyan University); Artist’s Illustration Credit: NASA, ESA, and G. Bacon (STScI).

Meanwhile, we still have two viable spacecraft in the outer reaches of our Solar System, taking data on interstellar material, magnetic fields and cosmic ray hits and giving us a sense of what the local interstellar medium (LISM) is like. That’s crucial information, of course, for one day we hope to have not just a few but many spacecraft operating on the edge of interstellar space, and going beyond our system will require us to know the nature of the medium through which they move. On that score, the best book I know is Bruce Draine’s Physics of the Interstellar and Intergalactic Medium (Princeton, 2010). I enjoyed talking to Draine (Princeton University) at the latest Breakthrough Starshot sessions.

As you can imagine, learning more about the interstellar medium is a prerequisite if you’re thinking of pushing something up to 20 percent of lightspeed, as Breakthrough Starshot is, so the topic was a lively one at those meetings. At the recent American Astronomical Society meetings in Texas, we learned that astronomers have been using Hubble data to supplement what Voyager has been giving us, charting the hydrogen clouds and other elements of the LISM. Seth Redfield (Wesleyan University), who leads the study, offers this comment:

“This is a great opportunity to compare data from in situ measurements of the space environment by the Voyager spacecraft and telescopic measurements by Hubble. The Voyagers are sampling tiny regions as they plow through space at roughly 38,000 miles per hour [61,000 kph). But we have no idea if these small areas are typical or rare. The Hubble observations give us a broader view because the telescope is looking along a longer and wider path. So Hubble gives context to what each Voyager is passing through.” 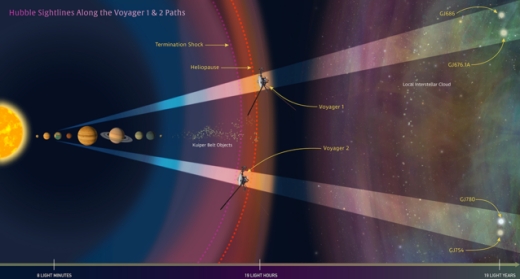 Image: In this illustration, NASA’s Hubble Space Telescope is looking along the paths of NASA’s Voyager 1 and 2 spacecraft as they journey through the solar system and into interstellar space. Hubble is gazing at two sight lines (the twin cone-shaped features) along each spacecraft’s path. The telescope’s goal is to help astronomers map interstellar structure along each spacecraft’s star-bound route. Each sight line stretches several light-years to nearby stars. Credit: NASA, ESA, and Z. Levy (STScI).

The Hubble work makes it clear that in two thousand years or so, Voyager 2 will move out of the interstellar cloud that surrounds the Solar System before moving into another cloud, in which it will remain for as much as 90,000 years. The astronomers find slight variations in the abundances of the chemical elements in these clouds, which could chart a history involving different paths to formation. We do know that as the solar wind pushes against the interstellar medium, the heliosphere can be compressed, only to expand again when the Sun moves through lower-density matter. For more, see this Hubblesite news release.

We still haven’t built the next generation LISM explorer, one crafted from the outset as an interstellar data gatherer. As much as the Voyagers continue to give us, we have to remember that they were designed as planetary probes, their survival to this point being an amazing and unexpected gift, but one that has to be adapted to the medium through which the spacecraft move. A spacecraft fine-tuned for exploration beyond the heliopause is a goal that continues to see its share of study (more on this soon), but when it will fly remains an open question.